The course of true love never did run smooth. While Rupert Murdoch and Jerry Hall are still in the throes of new love, a UK-based blog devoted to exposing rogue journalists has revealed that Hall may have been one of the victims of phone hacking at a Murdoch newspaper. According to Nick Davies’ book Hack Attack, a young reporter at The Sun in the late 1990s (called “Sand”, for legal reasons) introduced the trick of hacking voicemail to get celebrity stories, including the worldwide exclusive that Jerry Hall and Mick Jagger would be getting a divorce:

“A former colleague, whom I will call Diamond, says Sand’s phone-hacking was well known to be the source for the Sun’s long-running coverage in 1999 of Mick Jagger’s divorce from Jerry Hall, and identifies Jagger’s PR man, Bernard Doherty, as a particular target … Diamond also claims that [Andy] Coulson said of Sand: ‘He’s a one-trick pony. But what a trick!'”

“In November 1998, for example, the Sun discovered a lawyer acting for Jerry Hall was secretly meeting Jagger’s mistress in New York.

“The lawyer was hoping the woman would provide ammunition in the event of divorce proceedings.

“A Sun reporter was waiting for the couple when they left a restaurant.

“The reaction of Jagger’s girlfriend was: ‘Oh my God, how did you find me?’

“The lawyer asked the reporter: ‘How DID you know we were here?'”

New relationships often have awkward moments, but “hey, darl, did your employees illegally hack my phone?” is not a standard get-to-know-you question.

Turnbull’s Insta-gaffe. Avid users of social media will know that the right caption can make or break the success (read: number of likes) of that carefully posed but natural-appearing shot. Malcolm Turnbull’s staff know this too, but they accidentally let us in on the secret yesterday, with a photo posted to Instagram featuring a caption, along with a conversation between staffers brainstorming what it should say: 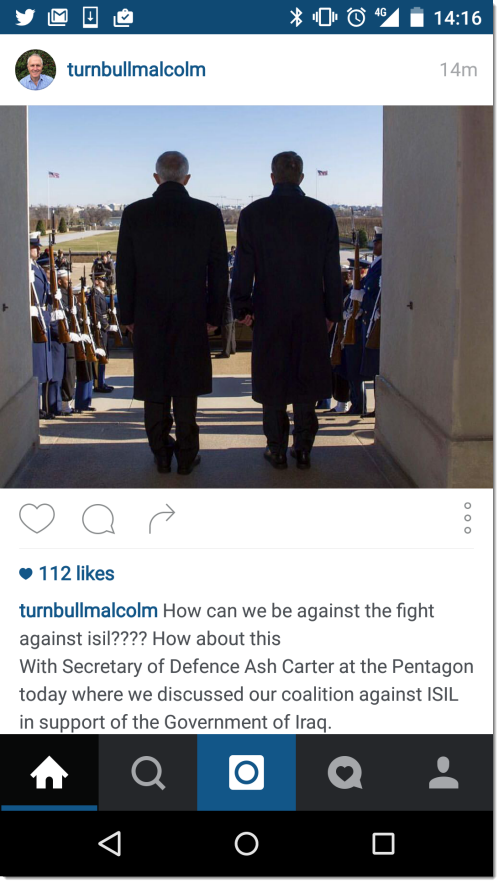 The picture, of Turnbull and US Defence Secretary Ash Carter, was posted to Instagram yesterday afternoon with the caption: “How can we be against the fight against isil??? How about this — With Secretary of Defence Ash Carter at the Pentagon today where we discussed our coalition against ISIL in support of the Government of Iraq.”

It was quickly removed, but nothing disappears on the Internet, and screenshots live to tell the tale. The Australian has chosen to see the gaffe as a revealing look at Turnbull’s foreign policy: “The oversight provides an insight into the PMO’s messaging over the government’s refusal to offer substantial additional resources to combat Islamic State.”

Australians no Trump fans. While Sarah Palin has thrown her support behind Donald Trump (no surprises there), the Australian public is less keen on the polarising Republican candidate. Even though Australians won’t be voting in the US election, Essential polling shows that 40% of Australians would prefer Democrat Hillary Clinton to win. Interestingly, Clinton’s support is highest among Coalition voters, with 47% preferring to see her in the White House. Some 46% of Labor voters and 39% of Greens voters are keen on Clinton. Donald Trump is preferred by 12% of those polled, sitting just above “someone else” on 8% but well behind those who “don’t know”, which is 32%. Democrat Bernie Sanders polled just 6% overall, but is preferred by 32% of Greens voters — no surprises there either.

Speaking of Palin, this clip from the former US vice-presidential candidate has got us stumped in the Crikey bunker. We’re not sure what on earth she is actually saying. If anyone can translate, we’d love to know: 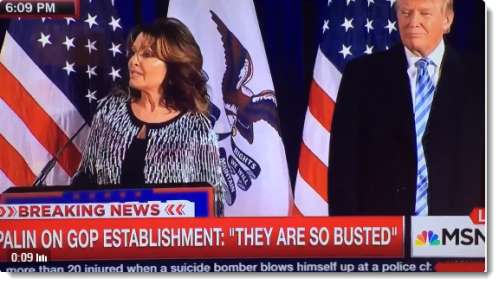 Carr gets bottled. UK comedian Jimmy Carr is touring around Australia, and a tipster tells us that his brand of humour almost caused him injury at Sydney’s State Theatre last night:

“Towards the interval he asked for a Christian member of the audience to identify themselves, and one unfortunate chap did.

“As you’d expect with Carr, he then went to town about unwed teenage single mothers, cheap housing, one night stands and questioning beliefs. All very funny, as always, until some boofhead threw a full water bottle at him from the balcony. Luckily it missed and landed backstage, but the audience was quite shocked.

“Indeed, Carr had no idea it had happened until after the interval. So he went to town again about turning the other cheek, whacked in some Muslim comments, and at the end mentioned that it had been a year since someone ‘with no fucking sense of humour’ had shot Charlie Hedbo magazine contributors. ‘I don’t give a shit if someone throws a bottle of Fanta (sic) at me. It’s not going to stop me.’

“And he did strike gold with another hapless audience member, who, when asked where she worked, replied with ‘For Rupert Murdoch’.

“Drawing on his unfortunate decision on using a British tax avoidance scheme some years ago, for which he was called out by David Cameron and is a favourite heckler topic for Carr, he replied: ‘Well, where were you when I needed you?'”

Is my Dream of a Trump/Palin ticket slouching closer?
Not Jerusalem but Armageddon, here we come.

Jerry Hall has found the only solution to guarantee her private life isn’t hacked.

This item was almost as out of date as your Rssrndon Doping Saga materials.

Regarding that Palin clip, I’m going to quote something from The West Wing; “I’m a gun toting, beer drinking, redneck son of a bitch” or words to that affect.
Mind you with Palin, and Trump, putting words into a coherent sentence requires mental resources that are just that little bit beyond them !!!!

Mind you, Rob Fischer, if it were possible to place bets on a coherent writing contest between Trump and Palin against a median team from the Crikey Commissariat Bunker, the smart money would be on the former, wouldn’t it.
Cheers, and regards to the Commissariat Censorship Team.