Poll Bludger: how Palmer rose, then fell, then fell some more

How did Clive Palmer go from lovable upstart to a prince without subjects?

The collapse of Clive Palmer’s Queensland Nickel refinery has refocused attention on what’s left of his political party, which just two years ago looked in real danger of making good on its threat to shake up Australian politics.

After winning three Senate seats plus one in the House of Reps at the 2013 election, all that remains of Palmer’s political enterprise are his ongoing responsibilities as member for the Queensland seat of Fairfax, and the vote of his remaining Senate loyalist, Dio Wang.

As the opinion poll trend measure shown below makes clear, this has been reflected by the all but total disappearance of its electoral support.

The Palmer United Party recorded 5.5% of the national vote at the 2013 election, then reached a peak approaching 7% in the wake of the government’s politically disastrous May 2014 budget, before suddenly commencing a sharp decline about two months later.

It was at precisely that time that Palmer’s trio of senators took their seats, together with a de facto fourth member in the shape of Ricky Muir, who entered an alliance with Palmer shortly after his surprise victory as the Victorian candidate of the Australian Motoring Enthusiast Party.

That brought the PUP into contact with the hard edge of real responsibility for the first time, after which it almost immediately began to disintegrate.

Having lost two-thirds of its Senate team, the PUP lost its value to Muir as a security blanket, and he has increasingly followed his own path.

Meanwhile, the run of polling last year found the party barely keeping its head above the 1% mark, even as alternative minor-party options trended upwards amid the mounting woes of the Abbott government. 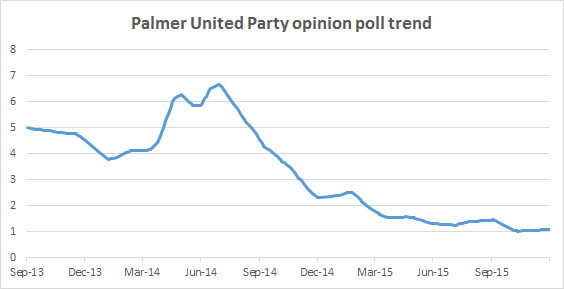 For those sceptical about the value of opinion polls, byelections have borne out the trend.

At the peak of the party’s fortunes in April 2014, Dio Wang secured his seat at the Western Australia Senate re-run election with 12.3% of the statewide vote.

But by the time of the North Sydney byelection last month, the PUP candidate could only manage 352 votes, finishing last out of a field of 13 on a 0.5% share of the total.

What now, then, for Palmer’s party, and the scattered remnants of his class of 2013?

Wang, Lazarus, Lambie and Muir all have terms that are fixed to continue until mid-2020, barring a double dissolution — which at this point seems unlikely, at least during the present term.

Beyond that, the PUP’s dismal level of support is no disqualification from future victories under the present Senate electoral system, as the 2013 result made clear.

It should be noted, however, that the system’s eccentricity does not mean that the Senate preference lightning can strike just anywhere.

Family First and the Democratic Labour Party may have won Senate seats with as little as 2% to 3% of the vote, but the truly freakish results turned up by the group voting ticket system have been to the advantage of parties who are harder to place on the ideological spectrum.

Certainly that applies to Ricky Muir, whose share of the vote in Victoria at the 2013 election was 0.5%; it very nearly applied to Wayne Dropulich of the Australian Sports Party, which came within an ace of being declared a winner in the original Western Australia Senate contest despite polling only 0.2%; and it could be said of the Outdoor Recreation Party and Reform the Legal System, which won seats in the New South Wales Legislative Council from 1% of the vote or less before the system there was reformed in 2003.

The reason for this is that micro-parties are generally very happy to boost each other’s chances through their preference allocations — often with the encouragement of entrepreneurs like “preference whisperer” Glenn Druery — but only if the other parties are not explicitly offensive to their own ideology.

Few had such concerns about Ricky Muir and the Australian Motoring Enthusiast Party, which was able to scoop up votes from everybody from Family First to Help End Marijuana Prohibition.

That’s an encouraging precedent for the amiable Glenn Lazarus, who has adopted purposefully centrist policy positions and represents a state with a particularly high level of support for fringe parties.

It’s less good news for Jacqui Lambie, whose potential appeal to the anti-Turnbull right stands to be tempered by her incapacity to draw preferences from the Greens or any other left-of-centre concern.

The PUP itself was excluded from the preference networks organised by Druery in 2013, as it was seen as one of the bigger players the genuine micro-parties needed to combine their forces against.

However, now that the party has barely 1% of the national vote to rub together, it could well be able to deal itself in — and in doing so illustrate the perversity of the existing Senate system by benefiting from its own collapse in support.

As for Palmer himself, betting markets are implying a 12.5% probability that he will retain his Sunshine Coast seat of Fairfax at the next election, which he won by 53 votes in 2013 — if, indeed, he exposes himself to the potential embarrassment of defeat by running again.

Surely the important point here is not the fate of Mr Palmer, but the dire need for a Senate voting system that avoids the ridiculous situation where someone with less than 2% primary support can end up with a Senate seat. It seems that we are constitutionally incapable of accepting that there are better options than anything we currently have.

It remains a mystery how Lambie tolerated him for so long & why Lazarus didn’t jump sooner.

In all the blather about changing the Senate voting system, why is not the obvious problem, Above-the-Line voting by 97%+, ever mentioned?
This gives us, with one of the world’s fairest voting systems for the intelligent voter, a system so corrupted as to make the Euroland List system seem democratic.
Abolish the Line – it was only PJK urging Hawke in 1984 that created it – and allow voters to choose a minimum number on the beach towel ballot, saying 25% more than the seats available, ie less than 20 boxes.
Problem solved, full use of Transferable Preference even if held in winter when Labor voters might have to take off their shoes & socks.

Naturally drawn to the Limited News Party – happy to put up with his idiosyncrasies as long as the money held up and he wasn’t too demanding?