Summer holidays be damned: our politicians are still in business mode.

Prime Minister Malcolm Turnbull has spent the week visiting troops in Afghanistan and Iraq before dropping into the US White House, acknowledging that “boots on the ground” are needed to defeat Daesh but the focus should be on local and regional groups. Turnbull also called for the people of Australia to step up, saying the terror group’s claims “must be mocked and disproved” as soon as they are made in the cyber sphere. Former Defence Minister Kevin Andrews enters our index this week in ninth place after criticising Defence Minister Marise Payne for denying the USA’s request for more troops.

Palmer United Party leader Clive Palmer has jumped up 23 places into second this week, after his Queensland Nickel refinery announced it would sack over 200 workers near Townsville and went into voluntary administration. The company cited low nickel prices and the Queensland government’s refusal to guarantee a $35 million loan, and believed it could trade out of administration. Queensland Premier Annastacia Palaszczuk, in eighth place, has organised a meeting with ministers and director-generals to discuss the government’s accelerated works program announced for north Queensland.

Treasurer Scott Morrison says the Australian economy remains stable despite the volatility in global markets and a Deloitte Access Economics report that warned Australia faces its slowest income growth in more than half a century, suggesting a rise and broadening to the GST and cutting the company tax rate to 22 cents would help the local economy grow. Meanwhile, NSW Opposition Leader Luke Foley announced a Shadow Cabinet reshuffle and oversaw the resignation of the NSW ALP general secretary Jamie Clements following accusations of sexual harassment. 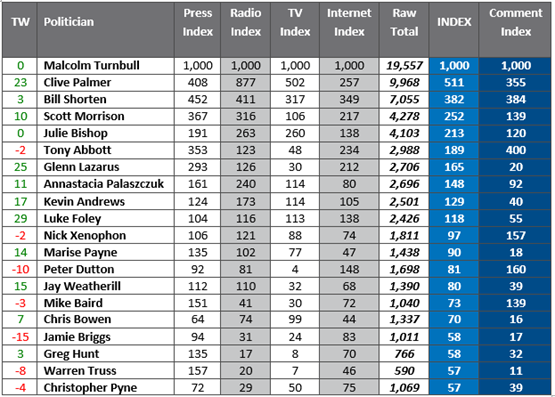 Opposition Leader Bill Shorten is a worthy recipient of #auspol meme of the week, with footage of him following a woman and a child around a supermarket and making small talk about lettuce quickly picked up on social media. At least there was no mention of a warm-lettuce flogging.

Talkback is already looking ahead to the election, with speculation over whether the PM will call an early one, and callers also interested in Australia’s role against the Islamic State.

With Tuesday named by Tennis Australia as “C’mon Day” in Hewitt’s honour, fans were gifted a three set win over fellow Aussie James Duckworth at his last Australian Open yesterday, which means Hewitt is through to round two.

Sure, we’ll mock Daesh, but it isn’t going to stop us mocking you too, Malcolm.