Rumours of Bolt’s televisual demise are greatly exaggerated. While The Bolt Report may not return in its current format, columnist and TV host Andrew Bolt yesterday brushed away rumours the show was being axed  saying if anything he’d be doing more television this year, not less. His declining to tell his readers what exactly was going on, he said, was because negotiations were ongoing. A Crikey tipster got in touch yesterday to give us an idea of just those negotiations are about. “The talks are around moving the show to a different network with more episodes a week,” the tipster said. Going to Sky News, as is speculated, would slash Bolt’s audience, but maybe that’s worth it if he’s on every day.

Of course, there’s another interesting factor to any move by Bolt to Sky. While Bolt commands large audiences and larger name recognition, many of his opinions have been brushed aside, including within News Corp (most notably by former Oz editor-in-chief Chris Mitchell) as not appealing to the wealthy, educated demographic targeted by outlets like The Australian. Sky News targets a similar demographic of insiders and bigwigs. How comfortably will Bolt fit in?

Well, maybe we shouldn’t dismiss Bolt so easily — he does have his share of high-brow tastes. He hasn’t been blogging much over the summer break, but he did take time last week to regale readers with his playlist on a recent stint guest-hosting an Opera Favourites program.

Public servant shake-up. The News Corp papers reported on Sunday that Malcolm Turnbull and his senior ministers had purposefully kept out of the media over the Christmas and New Year break to give the population a rest from politics, but that doesn’t mean that nothing is going on in Canberra. Over at The Mandarin, there is speculation about just who will be the next secretary of the Education Department. While Martin Parkinson is about to start at Prime Minister and Cabinet and his wife, Heather Smith, has been announced as secretary of Communications, there is yet to be any announcement of the new Education top job, or a replacement for Peter Varghese at DFAT — he is due to hang up the boots in July. One name being thrown around for Education is Nerida O’Loughlin, currently a deputy secretary at the Department of Communications and the Arts. If O’Loughlin were to be promoted it would increase the number of women in the top ranks of public servants — right now there are just four women in the top jobs at the 18 government departments or agencies.

Turnbull’s secret airline meals. Our colleagues over at The Mandarin also reported yesterday that we’re not allowed to know what meals Prime Minister Malcolm Turnbull prefers on his flights. This sort of information had been released under freedom of information law for both Tony Abbott and Kevin Rudd in the past, but in this case it was decided that the current Prime Minister’s privacy trumped spilling the beans on his preferred meal of choice while jetting around.

Vic government no-show at Midsumma? Yesterday we reported on the pollies from all sides of (federal) politics who made an appearance at the annual Midsumma Carnival in Melbourne on Sunday, including Small Business Minister Kelly O’Dwyer and her Higgins rivals Greens’ Jason Ball and Labor’s Carl Katter. But one tipster tells us there was a dearth of state Labor MPs:

“Despite having made a fuss about the Andrews government appointing Australia’s first ever Minister for Equality, the said Minister for Equality and Creative Industries — Martin Foley — was a no show. Neither were the Premier or Deputy there. Labor only sent their Upper House Deputy Jaala Pulford, who made a quick speech and then left.”

Foley’s Twitter account reveals he has attended some Midsumma events over the past few days and promoted the Carnival event. The Rainbow Labor stall at the event was also handing out fliers listing the Andrews government’s achievements for the LGBTI community, including most recently legalising same-sex adoption. As previously reported by Crikey, Foley is also hosting a fundraiser prior to the Pride March at the end of January.

Close shave. Last week Ms Tips reported several of our federal pollies who threw the razor out over summer, but alas, like holidays, some of the best were short-lived. Wyatt Roy posted this photo to Twitter yesterday, showing that his beard is but a distant memory, just like the feeling of sand between his toes: 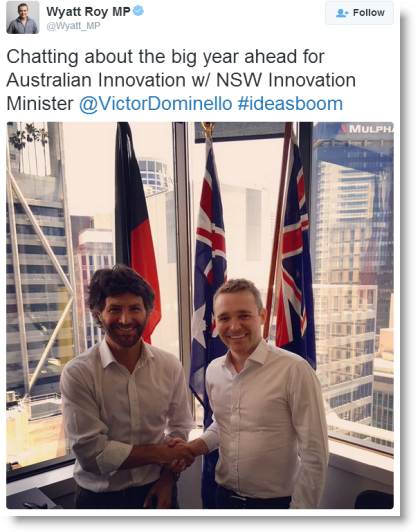 It’s a shame, as the beard got a good reaction from Crikey readers. One commenter said it was “pretty hot … In a Judd Apatow lead kind of way. He’d be mad to shave it off”. It’s not too late he’s got plenty of time to grow it back before Parliament returns. Chris Bowen is still persisting with his beard, which has a bit of a ginger tinge to it.

Won’t someone think of Kia? The world of tennis was rocked yesterday by a joint BuzzFeed and BBC investigation alleging that match fixing was widespread at the highest levels of the sport, with players lining up at the Australian Open implicated in the scandal. The story is explosive, but was batted away by the ATP at a press conference yesterday. Spare a thought for the Australian Open’s major sponsor, Kia, though — this is the second time in a week that they have unwittingly found themselves part of a sporting scandal. The car company sponsors both the Australian Open and the Essendon Football Club.

Picking up, kicked out. Last week Crikey reported that one of the “pick-up artists” from Real Social Dynamics was in Australia as part of a free tour, giving seminars to men that promised techniques to guarantee success with women. The website even offered that men could be as successful as movie producers and strip club owners (they aim high).

The group has courted controversy in Australia because its methods, as shown in YouTube videos, include using physical force and degrading women. While the seminars were not as well publicised as similar events run by Julien Blanc in 2014, with secret locations only revealed to attendees hours before the scheduled start time, activist group Collective Shout has managed to pressure budget hotel chain Vibe Hotels into cancelling the shows, and RSD has tweeted that the Australian leg of the tour has been cancelled. According to Vibe’s Twitter account, the group had booked its event spaces under a different name to avoid being detected:

A petition demanding that member Jeff Allen’s visa be cancelled gained 60,000 signatures and the Immigration Department has acquiesced, cancelling his visa in the same way it did against Julien Blanc.

SKY aims high? “Sky News targets a similar demographic of insiders and bigwigs. How comfortably will Bolt fit in?”
Given that the current line-up includes the deranged, the devious and the deluded, Jones, Richo & PvO it could find out, as mudorc found when he buttonholed the head of Macys New York about the top store not advertising in his rags -“Your audience are our shoplifters!”.

When the article is little more than Trivial Pursuit material, it’s hardly surprising if those who deem it worthwhile analysing the content are devotees of Trivial Nonsense, is it.

I think once you’re in bed with the immigration department and asking them to cancel visas, you need to think through your actions a bit …

Has it never occurred to you, Bob, that there are situations when cancelling visas is not only appropriate but essential? I’d suggest that, to quote you, “you need to think through your actions” not “a bit” but a lot. You do recall events such as how the deportation of that atrocious Lakemba Mullah was blocked by Paul Keating to gain a few votes and all that the man subsequently did, don’t you.Even Albo can’t always do the wrong thing.

From memory (happy to be corrected) “that Lakemba Mullah” actually didn’t have a valid visa and was staying on illegally. This is different. This slimebag and his predecessor did have valid visas, which were cancelled after a moral panic (the basics of which I agree with). The immigration department deports, incarcerates and mistreats many people – they are not instruments of moral and/or ethical action and I find the idea of granting entry or refusing entry to this country based on popular campaigns or the whim of the immigration department a frightening idea.

Some years ago the non-violent activist Scott Parkin was summarily deported, because of spurious ASIO “security” concerns. I don’t want to live in a country where people’s freedom of movement is subject to political or moral judgements – if they are legally allowed to come, then so be it.

In the case of these slimebags, fight them head on, argue with them and those who support them, don’t use the power of the (highly compromised) state to censor and silence them.