Goodness gracious, Queensland is in administration? Plus other media tidbits of the day.

Are things that bad? From the Townsville Bulletin this morning …

We take it they meant “Queensland Nickel”.

How many people does it take to run a TV channel? Try three. Recently released answers to Senate questions on notice show SBS has only three employees devoted to its new food channel SBS Food Network. When you consider the advertising (food programming is some of the most demanded by advertisers on SBS), the channel sounds like a licence to print money.

As previously reported, content for the channel is being provided through a deal with American broadcaster Scripps Networks Interactive, which owns both the Food Network and the Cooking Channel. — Myriam Robin

“While you’re groaning at clickbait ‘shows her ex what he’s missing in tiny bikini’ headlines, there’s a whole new level of trickery that lurks behind them. For example, a female celebrity recently posed for a tasteful set of nude photos with a glossy magazine, who published the story with an empowering, ‘you go girl!’ headline. The page’s URL, however, was a chain of sexy keywords that simply ended with ‘nude-photos.’ Things get especially murky once you delve even deeper into the behind-the-scenes sorcery. One tabloid journalist told me she worked on a site where every picture of a female celebrity — including those in full coverage outfits — was tagged with the word ‘panties.’ I’ll also admit to using the phrase ‘nearly-naked’ in headlines just to hit the search term ‘naked’.”

Front page of the day. A shaky start for the Australian Open … 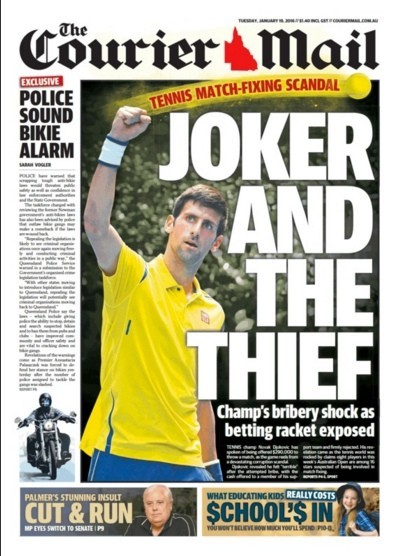 “Love blooms at Holt Street” – what a blessing that I have never heard of, nor read, any of those named.