ABC staff in hiding. ABC staff in Melbourne have once again been warned not to wear their ABC lanyards outside of the building to protect their safety, Crikey has learned. In an email this morning, staff were informed of incidents of verbal abuse against staff:

Recently there have been reports of ABC staff being verbally abused in the Southbank area, including outside the building.

Any kind of harassment or intimidation is unacceptable and should be reported to Police, building security and relevant ABC Manager in your department.

A reminder too, that it’s advisable to remove your ABC identification tag/lanyard as a safeguard when you leave the building.”

This is not the first time that ABC staff have been warned about their safety if they are identified. In June last year a similar email was sent to staff in Ultimo, as the controversy over Zaky Mallah and Q&A ensued. The United Patriots Front held a protest outside the ABC’s Southbank building last year, where they attempted to cook a pig on a spit.

UPF standover tactics. The United Patriots Front is taking its political push throughout regional Australia, with rallies across regional NSW, including the town of Orange. The local paper, The Central Western Daily, has published two articles about the UPF, with a front-page headline “Residents’ message to anti-Islam group: Go somewhere else”. 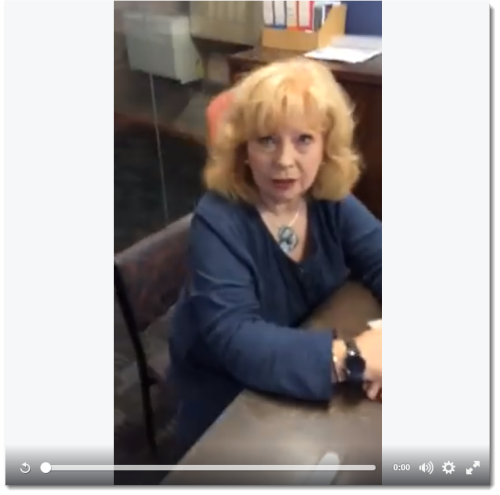 In a video posted on the group’s Facebook page, UPF leader Blair Cottrell says he “confronts” a journalist about bias in the newspaper, as he stands over and interrupts her. “You have twisted our statements in this newspaper, you have interviewed community groups, self-appointed community groups … who are these people?” While one could ask the same question about the UPF, Cottrell claims that they are a “legitimate political organisation”. The journalist appears to be unaware that she is being filmed until she says “you’re recording what I’m saying”. While she offers for Cottrell to sit down and invites him for a formal interview, he refuses, saying that he doesn’t trust the paper, and hasn’t got any straight answers. It’s a revealing clip.

Katter missing from Midsumma? Yesterday marked the start of the Midsumma festival in Melbourne, the annual celebration of the LGBTI community, and of course, the pollies were out in force. Member for Higgins Kelly O’Dwyer was there, handing out O’Dwyer-branded resuable shopping bags and a newsletter that touted her support for same-sex marriage, and spruiking her credentials on the environment, foreign investment and small business.

One tipster found it interesting that Labor candidate for Higgins Carl Katter had not paid for an advertisement in the Midsumma Carnival Guide, whereas his rivals O’Dwyer and Greens candidate Jason Ball had, wondering if Katter was avoiding the community. It’s possible that it was just an oversight, because like O’Dwyer and Ball, Katter was at the carnival meeting and greeting constituents with federal MP Michael Danby.

Poor slob without a name. Sometimes the smallest details about our politicians can be quite revealing, including this tidbit about British Labour leader Jeremy Corbyn over the weekend. In an interview with The Independent, Corbyn revealed that his cat’s name is “El Gato”, which means “cat” in Spanish, which is much less fun name than Chairman Meow.

“It’s a black and white cat. I always call it ‘El Gato’, which is just Spanish for cat … When I see the cat I say, ‘Buenos dias, El Gato’. Actually, cats don’t know their name, cats know voices. What he does respond to when I ask him to come in, is the tune of ‘Tie a Yellow Ribbon Round the Old Oak Tree’. I whistle to it. I can’t sing, you see.”

Return of Hillary Bray? Cut and Paste has long been an anonymous column in The Australian, but has the identity of the author been revealed by the paper itself? Online readers of Cut and Paste were greeted with this smiling face this morning: 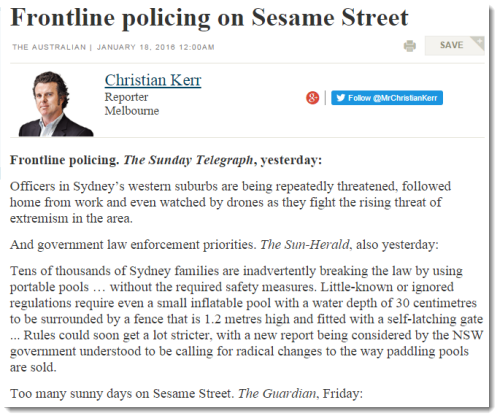 Mallah hurt <em>Q and A</em>, but this tweet wrecked ’em

Yeh, right, who’d recognise B1 and B2 … without their lanyards?

Hillary or Curr – don’t let him back into Crikey.

I’ve often wondered about the identity of Mr/Ms Cut n Paste and felt sympathy for the person whose job description must read “trawl through the output of our competitors, particularly Fairfax and the ABC, and find things we can criticize them about” Not much of a job on which to build the foundations of a media career I think.

Its clear too from the CnP columns that he/she is shunned by colleagues in The Oz lunchroom because the same transgressions of News Corp competitors regularly appear in The Oz itself. In the Jan 2 edition of the Weekend Oz, for example, CnP sneered at a Fairfax journo for commenting that 2016 will bring uncertainty. However in the lead story of the Oz’s Business section on the same day, journo Tim (can’t recall his surname) was quoting a clairvoyant in an article on the prospects for the sharemarket in 2016. Imagine the fun CnP would have had if Tim was writing for the SMH!