Want to read the Oz? Buy a subscription. And other media tidbits of the day.

The bureau life. Australian Financial Review Perth Bureau Chief Jonathan Barrett has left the paper. His farewell email, sent on January 7, finally made its way to Crikey this morning. “I was going to sneak off without a public goodbye; but I couldn’t resist,” he wrote to colleagues. “I call this last piece, The bureau life”. An abridged version is reproduced below:

“Given a reporter’s happiness directly corresponds with how far he or she is from head office (the further, the better … in case you were wondering) the bureau has been a happy work place.

“Paper deadlines hit in the early afternoon Perth time, and so, it’s possible to squeeze in a dusk swim, otherwise known as feeding time, in Cottesloe’s pristine shark-infested waters.

“Not that it is all fun and games across the Nullarbor.

“In my first few years here, it was not unusual to get a call from a sub asking why, for example, some court story hadn’t been filed. ‘Because proceedings haven’t started yet,’ was my usual blunt reply. Or there were the 5am phone calls asking for online copy on the latest company or political announcement.

“The Fin might be the country’s premier financial publication, but time differences apparently trip up the best of us.

“The humble bureau has been shifted around a lot; four offices in five years. We eventually settled into a new home in East Perth, sitting next to news, radio and disc-jockey types working for companies owned, or once owned, by Fairfax. We are squeezed into a corridor. I know I mustn’t complain … at least we didn’t fall for the hot-desking fad.

“Our modest surrounds correlate with the changing economic conditions of the mineral-rich state. At the boom’s peak there were six journalists in the bureau, and we had another four empty desks we were preparing to fill. While printed newspaper sales were dropping everywhere, they were actually rising in WA. I used to order weekly updates from the circulation team for self-aggrandizement purposes. Really nice guys those circulation people. When a WA story was placed on the front page, local sales rocketed.

“Our copy was so good — evidently so, given I use words like ‘self-aggrandizement’ — the AFR’s Perth bureau was bucking global newspaper trends by recording increased paper sales.

“There was even talk the bureau was going to secede. Or, at the very least, I was thinking of a Robert Holmes a Court-styled raid on the rest of Fairfax. Then the boom ended. The figures didn’t look so good. I stopped talking to the circulation team. I never liked them anyway.

“Once I leave, the bureau will be back to two people. It’s no great loss, everyone knows [they] run the office anyway …”

After thanking a few people, Barrett concluded by saying he had no set plans other than to tend his tomato patch.

Guardian down. London’s Guardian newspaper is joining the growing list of UK print media groups cutting costs, including staff. Reports at the weekend say the cuts haven’t been finalised, but the paper swung from a small profit to a loss in 2014-15, as the UK print ad market slid alarmingly in the final six months of the year. The Guardian’s looming cuts follow cuts to jobs and other costs at Trinity Mirror (the Mirror, Sunday Mirror and Sunday People) and at the Daily Mail Group, whose huge free website, the Mail Online, suffered a sharp slow-down in ad revenue growth in the latter months of 2015. As well, the Murdoch clan’s News UK papers have also reported lower ad revenues, especially The Sun, which has belatedly rejoined the free website sector in a hope of winning more readers and a bigger share of social media traffic and ad revenues.

After years of railing against austerity in economies such as the UK and Europe (and Australia for that matter), The Guardian and its free website are facing estimated losses for the year to March 2016 of 50 million pounds for 2015 (well over A$100 million), up from 45 million pounds in March 2014 year (the company balances at the end of March each year).

UK media reports say the Guardian and its website chewed up a reported 70 million pounds in cash (well over A$140 million) in calendar 2015 and the pressure is now on new editor, Katharine Viner (who started the website in Australia, with the help of a loan from Wotif founder, Graeme Wood). She then ran the paper’s US operations before being selected by staff last year to replace the long-time editor, Alan Rusbridger. Now she and CEO David Pemsel face the tough task of telling staff that severe cost cuts are needed. — Glenn Dyer

Want to read the Oz? Buy a subscription. News Corp has pulled its Australian titles off PressReader, a website that displays newspapers and magazines from around the world to paying subscribers.

In a statement accessed when trying to view Australian News Corp titles on PressReader this morning, the company says it is surprised and disappointed by the decision.

“Over the years we’ve helped the publishing industry adapt to the fast-changing ways in which readers consume content. Most publishers love this innovation and see it as the future of their business. At the same time, a select few remain fearful of change, disregarding what readers want in order to protect old, failing business models …

“As of today, News Corp Australia titles you’re used to seeing will no longer be available on PressReader. This is the choice of the publisher. These include The Australian, The Daily Telegraph, and a few additional metro mastheads. We’re surprised at this decision, especially at a difficult time when the legacy publishing industry is bleeding revenues and readers all around. We’re disappointed to see the publisher decide to put their interests ahead of those of readers like you.”

Video of the day. One for the Star Wars fans … 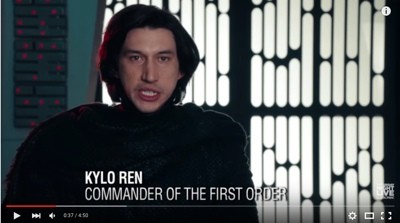 Ok, Fairfax and Murdoch, now pull your crap from Google by putting noindex in. https://support.google.com/webmasters/answer/93710?hl=en

We don’t really want to see your paywalled crap there.

Did you mention Chris Uhlmann and his wife?

What will Jerry Hall do with the Oz after the Scum King kicks the bucket?