Throw away the razor ... pick-up artists are back ... wedding bells for the chair sniffer? ...

Growth spurt. There’s something about summer, kicking back with a book, turning off the work phone, throwing away the razor … Yes, throwing away the razor. Many men enjoy the freedom to not bother with being clean shaven, but this year, many of our pollies have decided to keep the fluff on their face, with mixed results. Here are all the holiday beards we’ve found on our pollies so far:

Wyatt Roy posted this photo on Facebook, saying the beard won’t last long, but we like it: 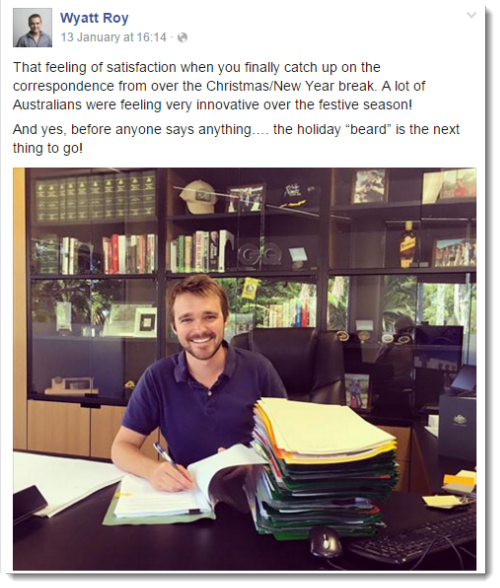 Chris Bowen’s effort featured on television this morning, saying that the beard didn’t have to disappear: 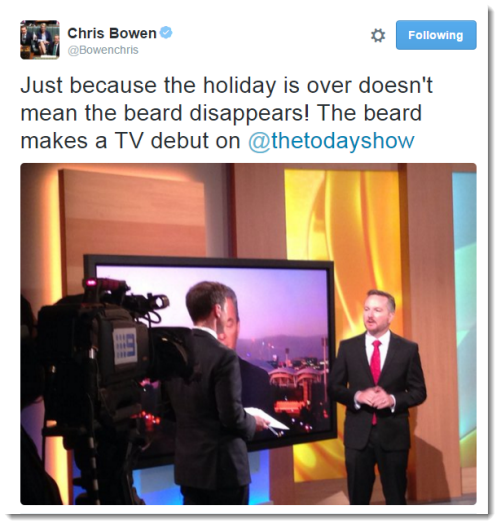 John Alexander may be facing a challenge when it comes to preselection for his seat of Bennelong; lucky he has a beard that makes him look like an elder statesman. When asked if it was permanent, Alexander tweeted “watch this space/face”: 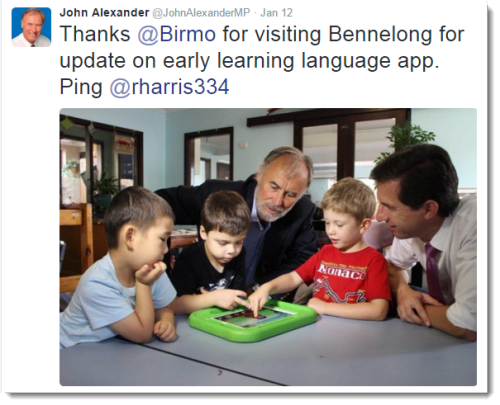 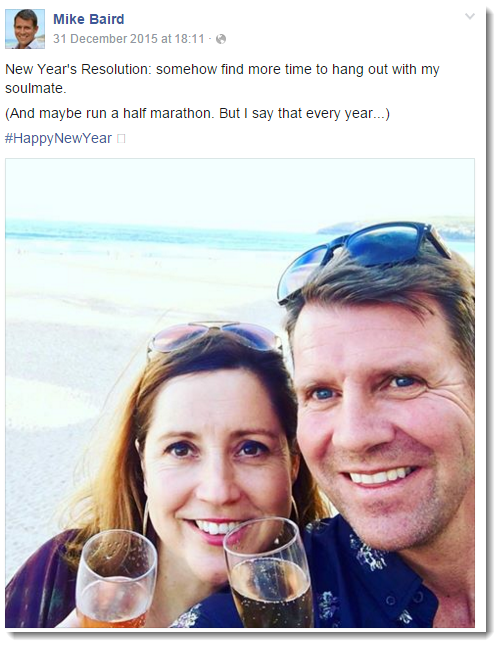 News Corp’s Rob Harris has put together this delightful collage of holiday beards as well: 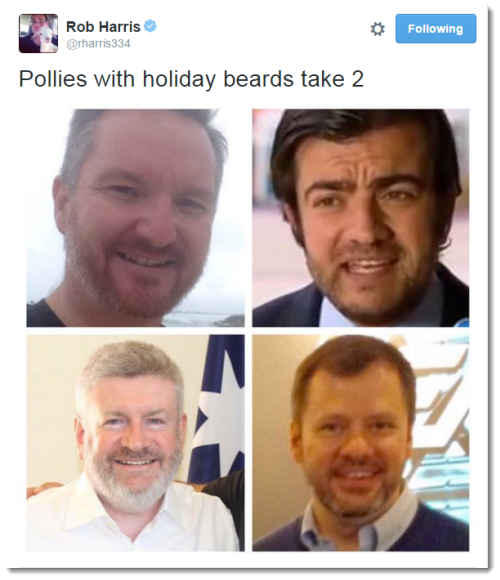 Greens leader Richard di Natale also seems to have given his whiskers a reprieve over the break: 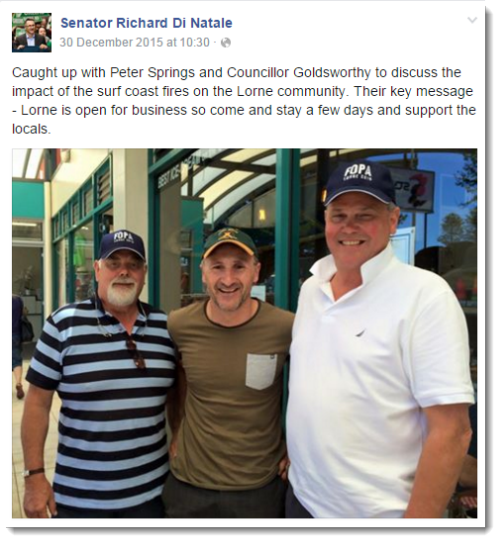 Pick-up artists back. The pick-up artists who promise to teach men techniques to be successful with women are back in Australia, although this time they are being much more secretive with the locations of their lectures. Real Social Dynamics, which promises to help men approach women, held a free lecture in Sydney last night, and is due in Melbourne, Brisbane and Perth in the next few weeks. According to the group’s website, they are also due back in the country in March and April. While the seminars are advertised as free, prospective attendees are required to hand over their credit card details to learn where it will be held, and face a $25 fee if they don’t turn up.

In 2014 Julien Blanc, one of the founders of Real Social Dynamics, was deported from Australia after his lectures were continually cancelled after pressure from activist groups. Blanc and his colleagues at Real Social Dynamics label their work as teaching men to be more assertive and include themselves in the “seduction community”, and videos of Blanc using physical force on women fuelled the outrage when he was last in Melbourne. While Blanc himself is not back, his co-founder Owen Cook, who uses the name Tyler Durden (yes, like from Fight Club), writes that one of the other members of RSD is. Exactly who is here is kept under wraps, but we’re watching this space.

Wedding bells for the chair sniffer?. Perth radio station 6PR has aired a rumour that former treasurer Troy Buswell is engaged. We don’t know much more, but looks like he’s moving on from politics.

Warring analogies. Maybe we’re reading too much into this, but Ms Tips found it interesting that different factions of the NSW Liberal Party used very different analogies to explain what is going down with a co-ordinated move to challenge sitting MPs when it comes to preselection. While conservatives are warning of “World War III”, another source who spoke to Fairfax predicted “worse than Game of Thrones red wedding”, a reference that had to be explained at the bottom of the piece. So what will it be: nuclear war or lots of stabbing?

Freedom! USA! Donald Trump has added to his freedom arsenal, with a rally in Pensacola, Florida, featuring this song and dance by three young girls dressed in the American flag, singing about freedom. Highlights include “deal with strength or get crushed every time” and “over here, over there, freedom and liberty everywhere”. The girls call themselves the USA Freedom Kids, and the number is titled “Freedom’s Call” (you have to answer freedom’s call) 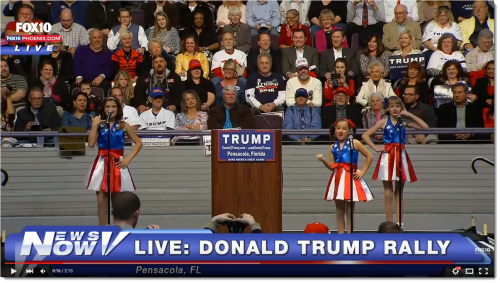 It will be stuck in your head all day … “Enemies of freedom face the music/ Come on boys, take them down” …

Reality sets in for holiday-bearded MPs

The USA Freedom Kids, hilarious. The world is not yet ready for them, we are still struggling to recover from French fries being renamed ‘freedom fries’.

Apparently our American cousins invented & patented the freedom concept. But why does freedom require a surfeit of guns…

I’m amazed that Wyatt could even grown a beard – surely it is photofudged?

Either way, pretty hot though, AR. In a Judd Apatow lead kind of way. He’d be mad to shave it off, frankly, he looks like a bloody Aeroplane Jelly ad without it…