What did Malcolm know and when did he know it? ... Gina Rinehart, Australian of the Year? ... about that roo photo ...

Was Turnbull developing policy on the sly? There’s still much to be written about how Malcolm Turnbull planned his ascension from communications minister to prime minister between September 2013 and September 2015 and how he brought down a first-term prime minister in less than two years. While very little policy outside of the innovation agenda has been announced, it is still worth asking whether the communications minister was quietly working on policy for when the time came for him to move against Abbott.

In September Andrew Leigh’s office filed a freedom of information request with the Communications Department seeking any costing requests from Turnbull’s office to the Parliamentary Budget Office. A month later, the department refused the request, stating that requests to the PBO were exempt from FOI legislation, and refused to confirm or deny whether any documents existed.

A subsequent request about this request revealed it wasn’t as simple as the department just flatly refusing to look for any documents — there were three internal email discussions within the Communications Department running to six and seven pages over the proposed refusal. Does this mean they’d found policy and debated about whether or not to release it?

Vote No. 1 miner. As we approach Australia Day, now more an occasion to debate if lamb really is that good, and if one can simultaneously be vegan and Australian, others are focusing on the titles that are handed out. While this year there will be no knights and dames, we will find out the Australian of the Year, as well as some other less official titles. The Australian runs an annual event inviting readers to vote for their own Australian of the Year, and the Sydney Mining Club wants in on the action. The club has emailed its members asking them to vote in the poll for none other than Gina Rinehart. According to the email:

“Anyone who completed construction of a $100m mine in 2015 deserves great salutation. Gina finished a $10,000m [sic] mine at the end of a perilous journey spanning two decades.”

The online form on the Oz‘s website allows readers to include a sentence or two about why someone deserves to be Australian of the Year. This is what the Sydney Mining Club suggests:

“Gina Rinehart is our greatest ever woman miner, & possibly Australia’s greatest ever miner. She honoured her father, used what he taught and built a $10billion low cost iron mine.”

This suggestion isn’t completely out of the blue, Rinehart launched her second book by the Club last year.

Seven gets to know Hockey and Abbott’s brands. Last year, Channel Seven asked the Department of Finance for a list of items provided to the offices of then-prime minister Tony Abbott and then-treasurer Joe Hockey. They got back two lists with a fairly routine items on them including digital cameras,  fridges, TVs and tables. The brands and models for these items were generally included, except for a Duress security system in Hockey’s electorate office, and a telephone system and security container in Abbott’s electorate office. These were excluded on the grounds that knowing the models and brands of these items could “compromise the safety” of Hockey, Abbott and their staff:

“Release of the model/brand of these items may make it more likely that interested persons would, if so intended, interfere or gain insight as to how to deactivate or render the Duress Security or telephone systems inoperable and, in the case of the cabinet, gain access to confidential information, held by the Minister in the course of electorate work with constituents.”

Information Commissioner Timothy Pilgrim disagreed, and earlier this month ordered the department to hand over the unredacted documents:

“[It is unclear] how the model of a duress security system, and the model/ brand of a security container and telephone system, would enable the security measures and procedures of those offices to become compromised if disclosed … these details do not reveal the placement of the duress security system or control panel, nor do they reveal how the security container could be accessed, or the telephone manipulated in such a way as to endanger the life or safety of any person.”

Good story roo-ined. Australian news organisations went gaga for this series of pictures of a family of kangaroos, which seem to show a male kangaroo lovingly cradle his dying mate as she reached out for her joey. Now a scientist from the Australian Museum has quashed any ideas of romance, with the museum’s principal research scientist Mark Eldridge explaining what is really going on:

“‘The male is clearly highly stressed and agitated, his forearms are very wet from him licking himself to cool down. He is also sexually aroused: the evidence is here sticking out from behind the scrotum (yes in marsupials the penis is located behind the scrotum).’

“Kangroos are extremely sensitive to heat, says Dr Eldridge. Furthermore, the kangaroo is not, unfortunately, ‘propp[ing] up her head so she could see her joey before she died’. Instead, says Dr Eldridge, ‘this is a male trying to get a female to stand up so he can mate with her’.”

You’ll never look at this photo the same way again: 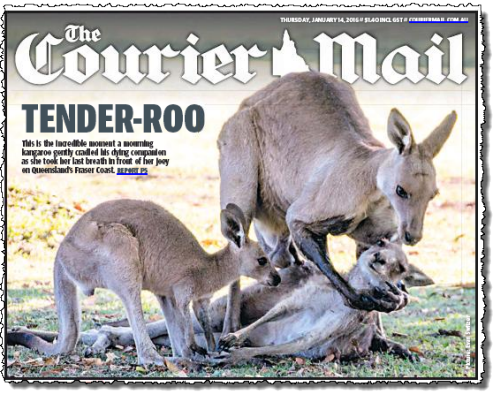 Turnbull back with wombats. Last year we reported that Malcolm Turnbull was due to be the guest speaker at the Wombat Hollow Forum, an event run by his friend and former Liberal Party treasurer Michael Yabsley, in September, and the event’s description made his leadership ambitions a little less opaque: “All the signs are that the level of scrutiny and anticipation are about to go into overdrive again.” Turns out that is exactly what happened, and Turnbull had to cancel his date with the forum, because he had prime ministerial duties to attend to. The appearance was recheduled, and the date has been set as February 5, and it has promptly sold out.

Pride has a cost. Members of the LGBTI community in Melbourne are disgruntled with Minister for Equality Martin Foley over an invite to a Pride March event. Foley sent an invite to a champagne brunch to be held before this month’s Pride March to community groups, which included the line “So if you are interested in the upcoming agenda in this space for 2016 or you have suggestions of your own, this is an opportunity to join in the conversation.” But attendance at the event comes at a cost — $40 a ticket. It’s not a high price, but Crikey‘s tipster didn’t like the suggestion that there was a price on being part of the conversation.

Trumped-up value. When it comes to Donald Trump, his brand is everything, with Politico reporting that his name is the single most significant item in his portfolio. But according to the report, that his run for president is tarnishing his name and his brand. According to a survey of American consumer opinion, people are actually losing confidence in the Trump brand:

“In categories such as ‘prestigious’, ‘upper class’ and ‘glamorous’ the Trump name has plummeted among high-income consumers. Within the same group, it is also losing its connection with the terms ‘leader’, ‘dynamic’ and ‘innovative’ — quite a blow for a man who criticizes others for being ‘low energy’ and considers himself an industry trailblazer.”

That kangaroo is a typical bloody Australian, behaving like an animal!

Kangaroo rape. Where is the outrage?