The Minister for Sewerage. Just before Parliament finished up for the year, there were a few questions put to Barnaby Joyce in question time over what his portfolio responsibility in relation to water was. As part of the deal Malcolm Turnbull made with the Nationals after becoming Liberal leader, the Agriculture Minister took responsibility for water from Environment Minister Greg Hunt. But it was still unclear exactly what aspects of water policy Joyce would be responsible for.

In response to a question on notice from Senate estimates, the Department of Prime Minister and Cabinet has confirmed Joyce is now responsible for “water policy and matters” but not “environmental water use and resources related to the Commonwealth Environmental Water Holder”. This means Joyce has oversight over a number of pieces of legislation, including the Water Act 2007 (but not part 6) and various sewerage agreement acts.

Another interesting tidbit from estimates documents is that when Communications Minister Mitch Fifield took responsibility for the Arts portfolio, including copyright and classification, the latter up until that point had been known as “censorship”, but “the opportunity was taken to update the language to better describe the matter,” apparently. Censorship of censorship at work.

Where’s Tony? Not signing off on anything. Remember back in September after Malcolm Turnbull had won the party room meeting but Tony Abbott had yet to resign? It wasn’t until well into the next day when Abbottsubmitted his resignation to the Governor-General by fax. If we were worried that Abbott had attempted to sneak through any final policies or appointments before he resigned, there was no need. According the Department of Prime Minister and Cabinet, there were no documents relating to ministerial matters signed by Abbott in the period after the party room meeting and his resignation as prime minister. Phew.

GST argument as strong as wet lettuce. Labor leader Bill Shorten is only two days into his tour around the country, speaking to constiuents about the GST and penalty rates, and he has already started one of the most ridiculous political conversations we are likely to have this year. At a supermarket yesterday, Shorten asked an unsuspecting shopper what her favourite lettuce was — she had an opinion on the burning issue, naming iceberg as her favourite. This prompted Triple J reporter Alice Workman to tweet Shorten, enquiring about his favourite lettuce, to which he replied: 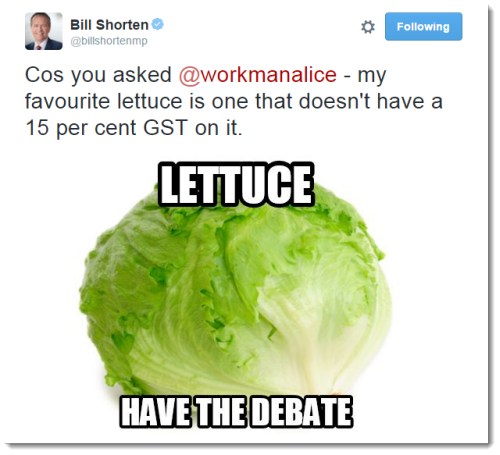 It has been pointed out to Ms Tips that the lettuce featured in Shorten’s tweet is actually iceberg, not cos, making us wonder if he is properly committed to keeping all varieties of lettuce GST-free. His comments have led to other pollies declaring their allegiance, with Christopher Pyne going for the fancy option:

And Tim Watts decided to take a swipe at a different type of Green:

Out of all this, we know that while Shorten was interested enough to enquire about someone else’s favourite variety of lettuce, he isn’t passionate enough about the issue to choose a side.

Team photo MIA. A caller to 3AW this morning says that the Essendon Football Club has had to postpone its official 2016 team photo, which was originally scheduled for next Tuesday. The club has lost 12 players from its senior list after they were found guilty of doping by the Court of Arbiration for Sport yesterday. The AFL has said the club can upgrade all of its rookies to the senior list and recruit 10 more players to make up for the shortfall.

Nikolic doubles down. Tasmanian MP Andrew Nikolic has taken to investing over the break, declaring in the interest register that he bought more shares in Santos over the summer. According to the regsiter, it’s not the first time Nikolic has invested in the resources sector, with Santos shares purchased in April last year and December 2014, as well as Orico and BHP Biliton shares. Nikolic must have got a bargain with the latest purchase, although he did get in before yesterday’s massive drop.

Movers at the Lodge. It appears as if Malcolm Turnbull will soon achieve something that Tony Abbott never managed as prime minister — actually living at the Lodge in Canberra. Removalists EJ Shaw posted this photo to Twitter yesterday, saying that they were delivering gym equipment. Ms Tips can’t help but wonder if a rowing machine was one of the items making the move — Turnbull has previously said that he has nothing in common with fictional US President Frank Underwood (from House of Cards), except that “we both use a rowing machine”. 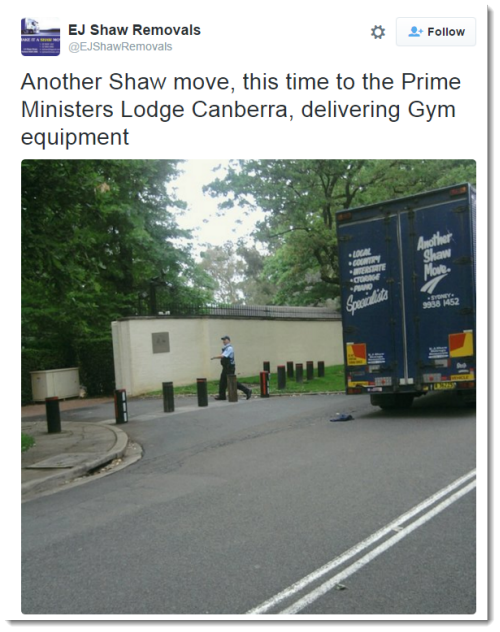 Zinngggerrrr! as limp as usual, I doubt that’cos’ was even an intended pun.
I disagree that “he isn’t passionate enough about (the/any) issue to choose a side” – he seems to believe in “Me for PM”, all else is negotiable including workers rights.

The Commissariat apparently has trouble understanding Joyce is now responsible for “water policy and matters” but not “environmental water use and resources related to the Commonwealth Environmental Water Holder” because this means Joyce has oversight over a number of pieces of legislation, including the Water Act 2007 (but not part 6) and various sewerage agreement acts.
While this is seen by the Commissariat as being, to quote them, “Clear as mud!” any reasonably competent primary school child should have no difficulty explaining it to them — or even AR.

I thought the quip was pretty clever actually.