James Hird to give his first post-decision interview to a sympathetic ABC journo. Plus other media tidbits of the day.

US charity act. Normally most of us are sceptical about rich Americans giving part of their multibillion-dollar fortunes to charity (“look at the tax break,” I hear the chorus chant). So what will the chorus make of the news that Gerry Lenfest (a wealthy former major cable player in the US and serial giver to needy causes) is donating the two US newspapers he bought almost two years ago to a charity foundation, and topping them up with an extra US$20 million?

Lenfest paid US$88 million at an auction in May 2014 to end years of rancour about the operations and management of The Philadelphia Inquirer, the Philadelphia Daily News and their websites. But early yesterday he announced in the US that he had created a new body, the Institute for Journalism in New Media, donated the papers and the website and other assets and added US$20 million.

“My goal is to ensure that the journalism traditionally provided by the printed newspapers is given a new life and prolonged, while new media formats for its distribution are being developed,” Lenfest said in the statement, adding that the two news organisations would remain committed to producing “independent public service journalism and investigative reporting that positively impacts the community, while also creating innovative multimedia content”. He said that readers would not see any immediate changes and the company’s contracts with its labour unions would remain in force. (So it is not a union-busting exercise).

Lenfest said in the statement that the Philadelphia Media Network would remain a self-governing, for-profit company, owned by the institute and run by the news organisations’ current management team and board of directors.

It is not the first time this route has been taken in the US. The Tampa Bay Times in St. Petersburg, Florida, is a for-profit operation owned by the Poynter Institute, and The Day, a New London, Connecticut-based paper, is owned in a public trust. — Glenn Dyer

London paper war looms? In the midst of the continuing downturn in print sales, stagnating website traffic, falling ad revenues (both print and digital), could we be about to see a new newspaper war in the UK? Last year, the Daily Mirror was rumoured to be working on a new paper, and overnight that story firmed up with the Press Gazette reporting that the Mirror has a team of people working on a new cheap paper modelled on The Independent’s “i“. The Gazette said that a “small team is being led by Sunday editor Alison Phillips along with executive editor Barry Rabbetts”.

The idea is to produce a paper that will sell for around 20-40 pence a copy against the Mirror’s 60 pence (which makes it the most expensive of the so-called red-top tabloids in the UK). The “i” newspaper sells for 40 pence and has been a huge success, selling 273,961 copies a day, compared with The Independent’s weak 56,005. The Mirror sells around 900,000, but has been losing sales (like all other papers, bar The Times).

If it looks like the Mirror is going to attack its rivals (and itself?) from below in the red-top sector, others will have to move. The Daily Mail, although not considered a red top, will have to react because, of all the other dailies, its niche is closest to the red tops. — Glenn Dyer

Video of the day. If the State of the Union were a Wes Anderson film … 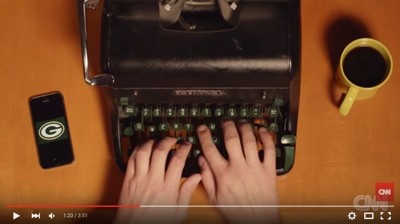 Front page of the day. Another shot in the New York tabloid wars … 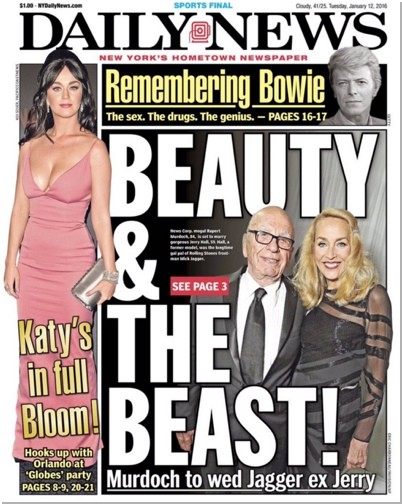 I can’t imagine mudorc marrying yet again without thinking of the Eagles’ “Lying Eyes”.

Marrying Rupert? It was either that or “Mother’s Little Helper”?