Corruption, sport and farewelling the Thin White Duke: 2016 begins with a bang.

As some of us were happily snoozing on the couch and “watching” Christmas movies, Prime Minister Malcolm Turnbull quietly “took out the trash” according to the Labor Party, after Special Minister of State Mal Brough and Cities minister Jamie Briggs — who enters our first top 20 of the year in second place — left his ministry. Briggs quit after admitting to inappropriately dealing with an Australian public servant in a Hong Kong bar, and was criticised further after a photo of the woman was leaked to media. There are also calls for Immigration Minister Peter Dutton, up 16 places this week into third, to leave the cabinet, after falling victim to the (somewhat) relatable mistake of sending a text about someone, to that someone. The slightly less relatable part was how he described a female journalist as a “mad fucking witch” just for doing her job, which paired with the controversial Chris Gayle sports interview, brought discussions surrounding sexism and women in the workplace into the media spotlight for the first week of 2016.

Acting Leader of the Opposition Penny Wong was quick to have a crack at Agriculture Minister Barnaby Joyce, describing him as “entertaining” but not leadership material, after he confirmed his desire to lead the Nationals and become deputy PM of Australia should current leader Warren Truss announce his retirement. Meanwhile, the Nick Xenophon Team has introduced a candidate for Warringah (Tony Abbott’s seat) in the upcoming election: Marie Rowland, a counsellor from Manly, with Xenophon conceding Rowland needs a “small political miracle” to take the seat, although independents have been successful in the past in that area of Sydney. 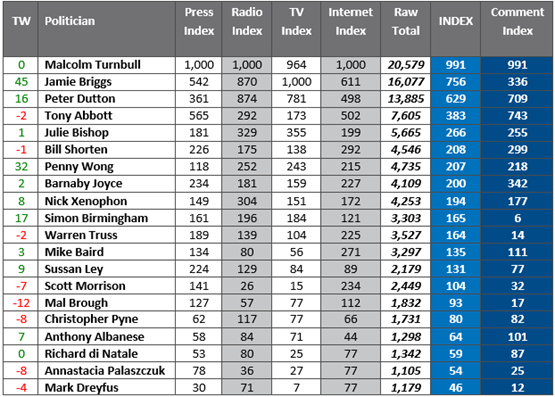 Social media was unhappy with Dutton’s texting blunder, but quickly jumped onto one of the first #auspol memes of the year. 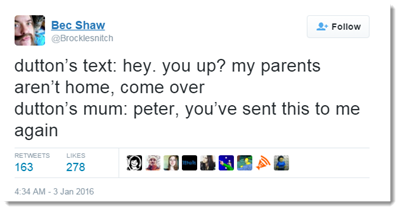 And as the federal election year begins, talkback radio wonders whether anyone can vote for the Liberal Party after “what they did to Tony Abbott” (caller Maureen, 2GB).

With over 4 million mentions on social media in less than 24 hours, and more than 300 calls on talkback radio, it’s clear the star man has left the world a better place.

Given that he lacks opposable thumbs, how can Dunnuttin be expected to text properly?