Irvine tries to patch up Immigration’s online debacle. Last year we reported that former director-general of security at ASIO David Irvine had been contracted by the Australian Border Force as a consultant, a role that we were told at the time was “to lead the review of the department’s intelligence function in support of the consolidated Immigration Department and the Australian Border Force”. Irvine’s contract was worth $159,500 over five months last year. Crikey can now reveal that his advisory role centred around the Immigration Department’s privacy breach, during which the details of almost 10,000 asylum seekers were published in an online bungle. Before ASIO, Irvine was the director-general of the Australian Secret Intelligence Service, and Australian high commissioner to Papua New Guinea.

Money for nothing, tricks for free. While students wait for university offers and those looking for a career change consider their options, it seems the vocational education sector has gone into overdrive, with one tipster reporting that advertisements for colleges have been appearing all over social media and online advertising. This one seemed particularly troubling, with a company called Funded Training Australia advertising to prospective students just how much the Australian government would cover in course costs. 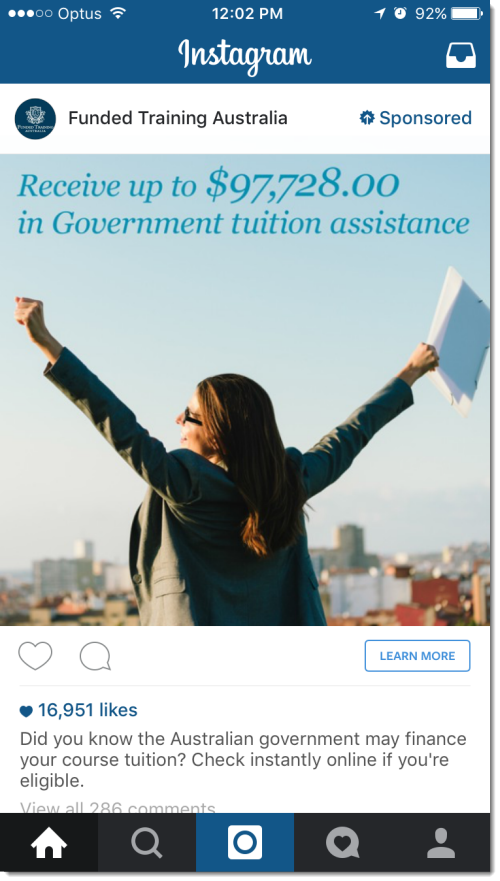 Funded Training Australia is not a government body or a registered training organisation, but a recruitment company. Its website says that it receives commissions from Estrada College for people who enrol in a course after being referred by FTA. While the government has banned colleges like Estrada from advertising free iPads and laptops as inducements for courses, and it was also made illegal to advertise courses as “free” or “government funded”. Now the language is “receive up to $97,728.00 in Government tuition assistance” and “Did you know the Australian government may finance your course tuition?”. Seems like a long way to go.

Guess who, don’t sue! A Crikey tipster tells us that between the Christmas and New Year’s Day an outspoken former politician was seen walking through Sydney Airport wearing a KFC bucket as a hat. We’re not sure if the pollie had been attending the cricket or whether the unusual headgear was a way to foil photographers. Our tipster didn’t grab a photo, but if anyone did, we’d love to see it. And if you know more, get in touch — you can stay anonymous.

A new hope. As our friends at Strewth wrote today, no one can replace Bruce Billson — and now we’re wondering if the man himself is angling for another chance at the table, after announcing his retirement from politics last year. Entrepeneur news website EntreHub wrote yesterday that “Billson is considered to have been one of the best Small Business Ministers in recent times responsible for the passing of key legislation that has boosted spending and employment by the sector since the May Budget”. It also claimed “Many are now calling on Prime Minister Malcolm Turnbull to bring Billson back to the Cabinet and convince him to stay on in Parliament at this year’s election”. Billson retweeted a link to the piece — could it be true? Or are we just getting our hopes up only to have them dashed again? 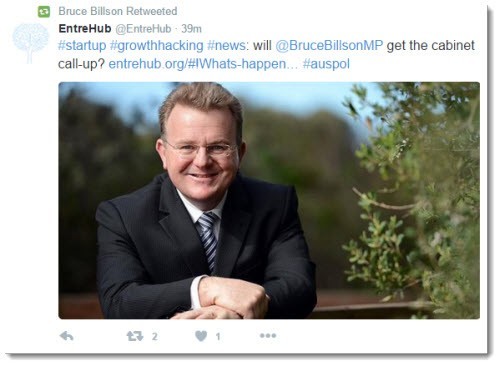 There’s always one. After the death of rock legend David Bowie yesterday, many of us used social media for tributes, posting YouTube clips of songs and memories. Footwear brand Crocs, howver, decided to use the opportunity to advertise its product. The tweet was quickly deleted, but it shows that Crocs are not only guilty of ugly shoes, but also insensitivity: 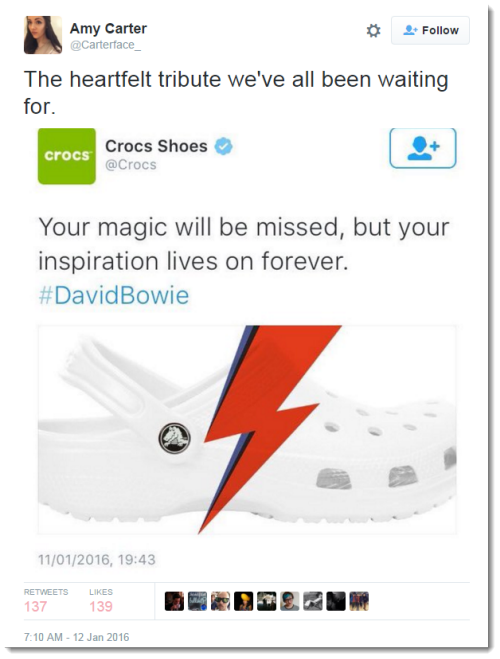 Tips and rumours: the spy who annoyed me

The Festive Season apparently continues with Crikey ever vigilant for trivial items, while ignoring such things as how Faux Progressive theories continue to have disastrous effects on Australian Education.

I stand to be corrected, but I thought that the Minister for Small Business…was a newly created portfolio.

Billson “… the best small business minister in recent times ….”? That would explain a lot of things. Billson would make a barely adequate used car salesman, maybe.