Sky deal finish in sight. Crikey hears that the long-rumoured News Corp takeover of Sky News Australia is very close to completion, with part-owners Seven and Nine having reached early agreements on some specifics before Christmas. That said, the deal’s not entirely done yet, with some due diligence still ongoing. It was reported in November that News Corp had begun “high-level due diligence” that week, and was expected to have offered something slightly above $20 million for Sky News’ owner, Australian News Channel. The widely anticipated sale will likely lead to  repercussions for Channel Ten, particularly its news division, which is part-owned by Foxtel, itself half-owned by News Corp.

Abbott the entertainer. Last last year Crikey reported that Tony Abbott had been holed up in his Parliament House office until days before Christmas, long after most other backbenchers had vacated Canberra for their electorates. We now hear from a tipster that Abbott’s time in his office wasn’t completely solitary, and that in mid-December he hosted drinks with ambassadors from the Five Eyes countries — the United States, Canada, the UK and New Zealand. Our tipster says that the reformation of Islam was one of the topics up for discussion. We asked Abbott’s office if the meeting took place, but didn’t hear back by deadline.

Who’s scared of Nick? Damn you, autocorrect! One of the candidates for the Nick Xenophon Team had an unfortunate mix-up on his Facebook page over the break, with the social media site describing him as a candidate for the Nick Xenopobia Team. The mistake has been rectified now, but a tipster got this screenshot for us: 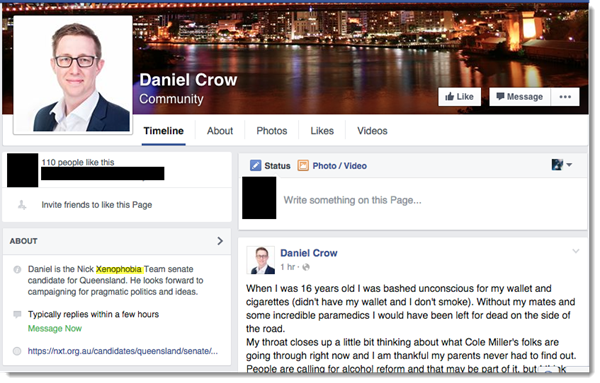 Long shadow of the moth. Ms Tips has long noted the ritual in Parliament House of MPs, staffers and journalists complaining about the invasion of bogong moths during the warmer months, moths have plagued Parliament since at least the 1980s. In cabinet papers released on January 1 from the Hawke era of 1990-1991, just two years after the new Parliament House opened in 1988, then-minister for administrative services Nick Bolkus noted that already funding was required to fix moth damage in the new building. Moth-proof carpet needed to be installed in the House of Representatives and the Senate over Christmas in 1990, at a cost of $48,000 for the House of Representatives and $132,000 for the Senate. The government also sought the help of the CSIRO to “regularly monitor the deterioration of the [carpet] fabric’s moth-proof treatment”.

On the upside, the paper noted that the construction of Parliament House came in $11 million under budget at $1.08 billion.

Strong headwinds for F35. It looks like 2016 is shaping up to be another year of bad news for the F-35 strikefighters, with yet another delay being reported by Defense News. The US Air Force has confirmed that it won’t lift weight restrictions on the jet until 2018 at the earliest, because it requires more testing to fix safety issues with the jet’s ejection seat. There is concern that pilots face an increased risk of neck injury during low-speed ejections, meaning that lightweight pilots won’t be able to fly the jets until a fix is in place. Originally a fix was meant to be in place by 2017, but that has now been pushed back to 2018.

Davey Cameron is a pie. It looks like the Twitter account of the leader of the Labour Party in the UK was hacked over night, with four strange tweets appearing, then being quickly deleted. According to website Politiwoops, which tracks deleted tweets from politicians accounts, Corbyn first tweeted “Here we… here we… here we fucking go!!!”, followed by “davey cameron is a pie” and “fuck trident \]”. His final tweet hit a bit close to home, when his account tweeted “Straya cunts”: 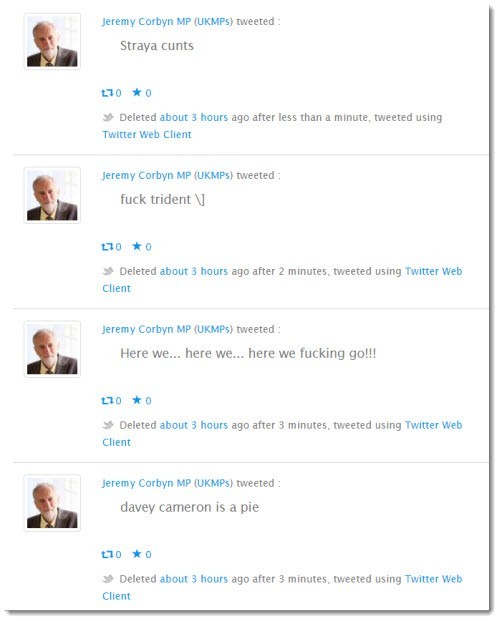 It is unclear why the hacker (and we’re assuming it was a hacker and not Corbyn after a few too many cream sherries) decided to use an Australian term to play with Corbyn’s account, but we are glad that BuzzFeed‘s UK oupost translated it for their readers as ” a phrase used by some Australians as a spontaneous expression of pride or to justify idiotic behaviour”. All the tweets were deleted minutes after they were posted.

Xenopobia? (sic) In an note drawing attention to a typo/auto-correct error, you make an error – not just in the text – but in the same word. Worth a chuckle.

Well the good Senator is that rara avis, the Too Seldom Spotted StrangeSound of Truth.

The most wretched TV program was Channel 2 featuring Tony Abbott commenting on the art work in Parliament House. The little creep wouldn’t know a work of art if he fell over it-and it showed.

With Sabra Lane in his fawnicating thrall?