Peter Brent has been sent packing from The Australian. Plus other media tidbits of the day.

Brent departs. The Australian’s new editor-in-chief Paul “Boris” Whittaker has already made his presence felt, telling Oz psephology blogger Peter Brent (who ran the Mumble blog first independently then at the Oz, though more recently he’s been primarily a columnist) last week that his services would not be needed in 2016. Because Brent was on contract, his departure from the Oz doesn’t strictly speaking count as a redundancy, but Brent tells Crikey his departure was presented to him as a cost-cutting measure. He wasn’t surprised.

“I was hired way back in 2010 by editor-in-chief Chris Mitchell; his departure, and the arrival of Paul Whittaker made my exit more likely than not,” he said. “Back when Boris was editor under Mitchell it was apparent that he did not necessarily perceive the magnificence of my product, but I had carte blanche from Mitchell to write about whatever I wanted.” Brent says it’s also possible his snark on Twitter at News Corp journos from time to time, supplemented by more veiled opinions in his writing, might have figured in the equation.

“But in the end it’s not personal, it’s just business. I enjoyed my time at the Oz a lot. Great, hard-working colleagues. And it was fun being a bit of a token (centre-)lefty. As for the future, I intend to continue writing for Inside Story and, hopefully, elsewhere. This is an election year, after all.” — Myriam Robin

Real estate case studies make for tricky territory. It can be hard for reporters to find that perfect case study to illustrate a story on a deadline. So we feel for the Daily Tele scribe who was asked to find a family happy to rave about Strathfield in Sydney’s inner west for Saturday’s paper, and who settled on the Susan Bonaccorso, who lives with her husband and four children in the “very cosmopolitan” suburb the Tele says people never want to leave. Look up Sebastian Bonaccorso, however, and you get the profile of the managing director of Elders Inner West, who sells houses in Strathfield, as well as other places. The Tele story makes no mention of the profession of Susan Bonaccorso’s husband, though it does name him. — Myriam Robin

‘He has hit on every female cricket journalist I know’. Over the break, West Indies cricketer Chris Gayle (now playing for the Melbourne Renegades in the Big Bash) made on-air advances towards a female reporter as she was interviewing him after the game. The incident has prompted quite a bit of introspection from sports journalists, with many saying Gayle’s behaviour wasn’t out of character. Over the weekend on his Facebook page, Australian cricket writer Peter Lalor added his thoughts:

“He has hit on every female cricket journalist I know and they felt really uncomfortable with it. Two cried as they spoke about it.

“I can’t imagine what it’s like to always be the odd one out as women are in these situations in sport … I have spoken to a number of former Australian players and they all concede they are not saints, but say that Gayle’s behaviour in bars was appalling … He has form and this incident was minor in itself but very important on a broader scale. There are no females writing cricket at the moment in Australia aside from Cate [McGregor] and only a couple who work for TV or web. India has a far better balance of the sexes. The male skew is understandable but needs to be addressed. People like Gayle make that very difficult.”

Lalor’s post made reference to allegations carried in the Fairfax press that Gayle had exposed himself to a woman working around the West Indies team during the last World Cup. Gayle is suing Fairfax over the allegations, having hired Sydney media lawyer Mark O’Brien to represent him. — Myriam Robin

Eat your heart out, TV. The radio revenue numbers are only a fifth of commercial TV revenues, but the 4.6% growth rate in the six months to December will prove hard to top. Figures from Commercial Radio Australia and Deloitte show that advertising revenue for the sector grew 4.62% to $390.821 million for the first half of the 2015-16 financial year. Brisbane and Perth stood out with higher-than-average rises but from smaller bases. The reports show advertising revenue for Sydney stations rose 4.06% to $119.627 million; revenues for commercial stations in Melbourne was up 3.75% (to $119.243 million); Brisbane stations recorded a sluggish rise of 2.37% (to $61.014 million); Adelaide jumped 11.84% (to $36.847 million); and Perth was up 5.80% (to $54.089 million). CRA chief executive officer Joan Warner said: “While advertising revenue was slightly softer in December, the overall performance for the first half of 2015/16 has been positive and reflects how well radio has adapted to structural change and subdued economic conditions.” Deloitte’s report showed a slowing in December (which should normally be a time of growth given the run-up to Christmas). In the month of December 2015, commercial radio advertising revenue for the five capital city markets fell half a per cent to $55.116 million, compared to December 2014. — Glenn Dyer

Press Council membership drive continues. The Press Council’s membership drive under newish chairman David Weisbrot has attracted some early success, with three new members signing up over the Christmas period. The biggest fish is Schwartz Media, publisher of The Saturday Paper and The Monthly. Chairman Morrie Schwartz said the company was “proud to join the Press Council and to continue [to] make an important contribution to Australian journalism”. Also joining was community paper the Bushman Shire Telegraph and Emanila group of websites, which cater to Australia’s Filipino community. The Press Council has particularly focused on signing up Australia’s multicultural press in recent months. — Myriam Robin

Front page of the day. Rolling Stone yesterday published an interview conducted by actor Sean Penn of Joaquin “El Chapo” Guzman. Penn met Guzman before the drug kingpin’s arrest yesterday. Guzman has been on the run since he tunnelled out of a Mexican prison six months ago. 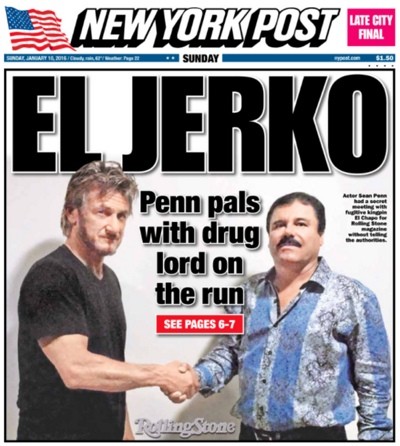 When the Crikey Commissariat undertake serious campaigns against ALL prominent personalities who engage in this sort of behavior we can take them seriously; but that could be a long, long time, couldn’t it?
If Post #1 isn’t censored, we shall have an indication they actually might do something worthwhile; but who’d be so game — or foolish? — as to do that.

AR…I was getting a bit worried for a while there…too much celebrating over the festive season, I thought!
Then I read your final comment with relief!!