“Chris, just so bad. Just so standard. We don’t care. We make money for kids. You? Well it’s a different journalism ideal I bought into. Probably not your fault. Greg Hywood should hang his head. Fuck off. Eddie”.

The text was sent at 2.48am, prompting Vedelago to respond: “Time to stop drinking Eddie. It’s 3am.” (Vedelago put screenshots of the exchange on his Facebook page, after which someone else passed them onto Crikey). A subsequent text from Vedelago read: “Brave enough to send a text in the middle of the night but not to speak on the record. You’re right, we don’t have the same ideals.”

Yesterday Vedelago, along with Cameron Houston, wrote a piece alleging the foundation’s CEO was resigning “over concerns that the promised shake-up of the charity could be misleading donors and sponsors”. In recent days the foundation has promised to hold fewer events, part of a “new direction’” intended to boost donations.

The piece somewhat stymies a comeback campaign the foundation has been waging this week, after Vedelago and Houston wrote last month that it donates just 16c on the dollar to children’s charities. Earlier this week the body invited some journalists (though not Vedelago or Houston, Vedelago claimed) to a briefing where it outlined its point of view on the issue of donations. McGuire is quoted in coverage from the briefing as saying the foundation has done nothing wrong, and that innocent kids would be harmed by The Age’s stories. “The reason why nobody has bailed off the board is that we really believe in this bloke, we believe in Shane Warne, we know his heart, we know his track record, we know he has recast this foundation,” he said.

Alan Jones not in the Christmas spirit. The Macquarie Radio Network Christmas party at Sydney’s Ivy turned feisty this year, when Alan Jones took the microphone and issued an editorial that probably wouldn’t make it to air. In a speech, observers say, the radio titan took to the stage and over the course of a 20-minute spray said the radio network was losing its culture and small business ethos and wasn’t looking after its people properly, a comment that was taken to be referring to redundancies at the network this year. Crikey called around this morning and had the comments confirmed by two sources, though another observer said it wasn’t all critical. Whatever he said, Jones didn’t have to worry about whether or not his comments were hitting their mark — Macquarie chief operating officer Adam Lang was also on stage, reportedly, and was described as looking quite uncomfortable as Jones unleashed. Crikey attempted to contact Jones to ask about the comments, but didn’t hear back.

As Macquarie Radio merged with Fairfax Radio earlier this year, many pondered what impact this would have on the home of figures like Jones and Ray Hadley, both conservative commentators often contemptuous of Fairfax who’ve historically had a far closer relationship with News Corp. Speaking to Fairfax last year, Hadley dismissed concerns about culture clashes, saying he worked and would continue to work for John Singleton and so “nothing has changed”.

Cash takes out the trash. Feisty Employment Minister Michaelia “yeah, nah, we’re not touching penalty rates” Cash is a former industrial relations lawyer — like Julia Gillard, who also held the industrial relations portfolio before becoming prime minister. Having someone well-versed in a portfolio area is a rarity in Canberra, and you’d expect it would be helpful, especially in an area as complex as industrial relations law. But it also means there’s a good chance that you not merely know, but may well have worked with, someone you appoint to the industrial relations umpire — currently the Fair Work Commission. A reader has pointed out an interestingly timed media release from Cash the Friday before last, in which she announced a slate of FWC appointments including the current Director of Workplace Relations at the Australian Chamber of Commerce and Industry, Richard Clancy, who’ll become deputy FWC president in February. Given ACCI’s stance on penalty rates, that makes Cash’s insistence that only the FWC should change rates a little more interesting. But she also announced the appointment of Perth lawyer Melanie Binet as deputy president. Binet was a colleague of Cash’s at Freehills in Perth between 1999, when Cash joined the firm, and 2003, when according to Binet’s CV, she left Freehills for Clutz. Binet is a prominent Western Australian IR lawyer who now has her own boutique firm, so there’s no suggestion of anything unmerited about her appointment, but it reflects how — like many other sectors of the Australian economy — IR is a small pond in which governments have to fish, and all the more so when each side of politics carefully fishes at its own end.

Making a list, checking it twice. Prime Minister Malcolm Turnbull has used Christmas to prove how agile and innovative he is, sending out an e-card instead of physical cards this year, leading to breathless reports about how he is the first PM to do so. 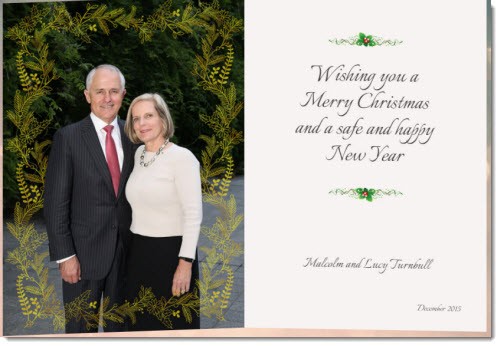 We don’t know why he didn’t send everyone one of those novelty videos with his and Lucy’s faces photoshopped onto dancing elves, but we wait for next year.

Gonna find out who’s naughty and nice. Another member of the government who is getting in on the e-card fad is Small Business Minister Kelly O’Dwyer, who has tweeted that instead of spending $1500 on cards, she’s donating books to children through the Smith Family. 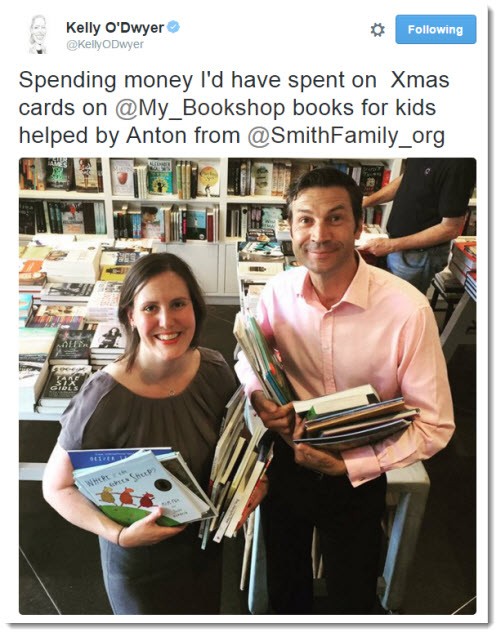 Of course, doing something agile and innovative and also charitable can’t be done quietly. Ms Tips has been told that O’Dwyer’s media advisor has been asking journalists if they want to interview O’Dwyer on the charitable use of e-cards, but hasn’t had much luck. One journo who refused the story didn’t even get sent an e-card after that, which seems very uncharitable indeed.

Queensland Senator James McGrath has sent out a different kind of e-card, photographing his paper card with a special message for social media: 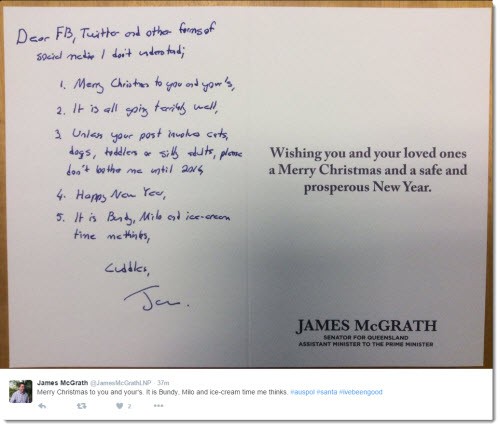 Foxtel seeks piracy detective. Australia’s pay TV network has already said it is planning to launch a court case next year to block piracy websites, and now the company is advertising for someone to be an “anti-piracy investigator”. Some of the work seems to be related to fraudulent Foxtel cards, but the role also involves preparing court cases and conducting piracy investigations. Interestingly, it seems that the position also has a dual role of being the person to deal with metadata requests from government agencies. Foxtel is now also an internet service provider, so now also has to deal with the mandatory data retention regime. If you’ve got ASIO security clearance, then perhaps this is the job for you!

MyGov, yourPrivacy. MyGov, the government website responsible for people’s online Medicare, Centrelink and ATO accounts, has been criticised for encouraging users to lower their security settings over the holiday season, to make it easier to access their accounts. If people turn off the setting, it means they won’t receive text messages with codes that allow them to verify their identity while signing in to the account. It’s not a good look for the agency to be encouraging people to cavalier with their online security, especially when its security has already been shown to be vulnerable. 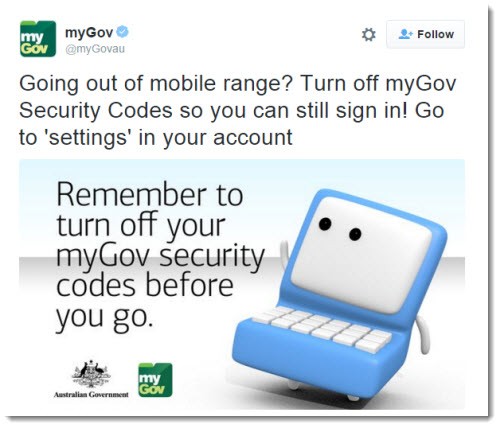 Onions and Christmas. The National peak body for onions, Onions Australia, has had a bumper 2015, pushed along by ex-prime minister Tony Abbott’s penchant for biting into the vegetable in front of TV cameras. Onions Australia has made the most of Abbott’s love of their product by sending out this picture with their Christmas message: 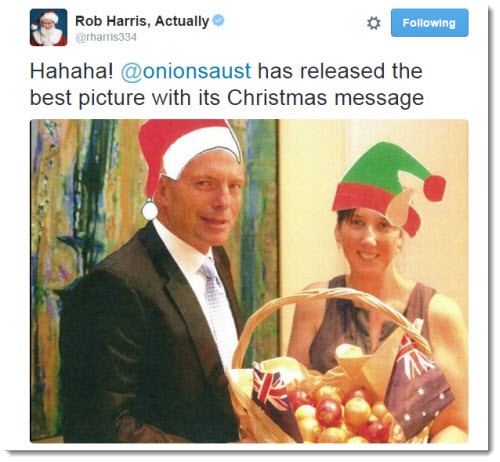 What a relief it must be for the Crikey Commissariat to see from the examples in this article that there are so many other capitalist media entities out there attempting to challenge them in the race to the bottom.

Doesn’t that ape ever run out of flags?

Where the heck can you go where you have internet connectivity but no mobile reception ?