Scott’s combative morning. Peter Costello is “no friend of the ABC”, and so his spray against the broadcaster in yesterday’s News Corp tabloids was utterly predictable, wrote Mark Scott in a response op ed carried in today’s News Corp papers and across the ABC’s websites. “As is the fate of some former political leaders, it is […]

Scott’s combative morning. Peter Costello is “no friend of the ABC”, and so his spray against the broadcaster in yesterday’s News Corp tabloids was utterly predictable, wrote Mark Scott in a response op ed carried in today’s News Corp papers and across the ABC’s websites.

“As is the fate of some former political leaders, it is easy to lose touch with the current reality and the sentiment of the public,” wrote the outgoing managing director.

“The ABC is a digital public broadcaster because the law says it must be – it is in the ABC charter. And the ABC’s most important stakeholder and owner, the Australian public, have demanded it be digital to remain relevant to audiences today and in the future.

“If you want to be a contemporary media organisation, you have to have a digital strategy that allows you to deliver across multiple channels to different audiences on different devices.”

While he was at it, Scott also responded, in a way, to an editorial in today’s Australian slamming the ABC over the Michelle Guthrie appointment.

“Radio and television news and current affairs — covering local, national and international issues — is the ABC’s core business. For that reason, it almost defies belief that a background in news and journalism was listed as the least important of 15 selection criteria the corporation used in choosing its new managing director/editor-in-chief,” the paper stated, following on from a Michael Bodey story yesterday that said the ABC board hadn’t prioritised journalistic experience in its search for a new managing director. 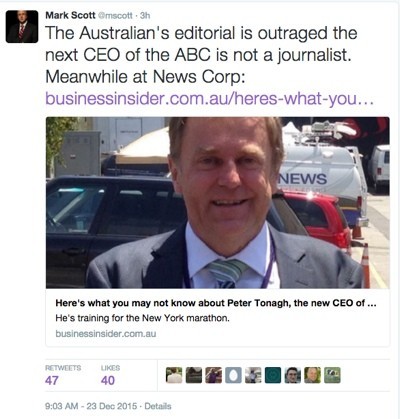 Tonagh has never worked as a journalist — he’s a former management consultant. To quote former News Corp chief John Hartigan at the Prime AGM this year:

“Who would have thought that Peter Tonagh would be running the company. It shows the level of disruption when you’ve got someone of his background coming in to the CEO [role]. It wasn’t all that many decades ago that I recall Rupert Murdoch just never countenancing having a management consultant anywhere near the building because he had a view, that wasn’t dissimilar to mine, in that once you let them in they’re a bit like white ants, you can’t get them out.”

Ain’t that fun. Although, in News Corp’s defence, Tonagh isn’t editor-in-chief, a title it appears the ABC’s new managing director will still retain despite a lack of journalistic experience. — Myriam Robin

Video of the day. R Kelly storms out of an interview after a journalist starts asking about his history of sexually abusing minors. He says he’ll only answer positive questions … 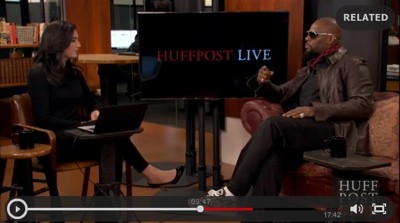 Front page of the day. Not everyone is going home for Christmas … 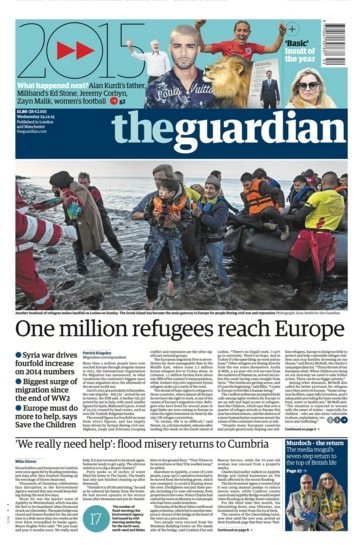 It may be that, “The ABC is a digital public broadcaster because the law says it must be – it is in the ABC charter.” But this avoids other aspects of the Charter which envisaged it seeking to provide quality programmes many of which Commercial media ignored, rather than as often happens now going for the lowest common denominator because it wants ratings. It often uses its exemption from Laws restricting what commercial enterprises are allowed to do, and anyone who isn’t aware of how the ABC / SBS duo exploit this would seem to be consuming some variety chemical ‘facilitator’ of the brain cells.
Those who can’t understand Scott was correct are intellectually challenged and/or biased beyond belief. When the selection criteria for choosing the ABC’s new managing director/editor-in-chief lists a background in news and journalism as the least important of 15 selection criteria in making their choice, they need to be replaced — as promptly as possible.
As a capitalist enterprise Crikey can approve of such appointments in its own domain; but it can’t set the ground rules where taxpayers resources are being squandered on the whims of its soul mates.

The idea that the primary role of the ABC is news and current affairs is simply the narrow and limited vision of Newscorp: it’s all they see.

Without the ABC a wealth of Australian history, oral and otherwise would simply be lost forever.

We would even more, be simply a subset of US mindlessness and corporate interests. Which is, of course, exactly what Rupert would like.

Elisabeth Meehan, while it may be an overstatement to say, “the primary role of the ABC is news and current affairs “ when it comes to what other areas the A.B.C Chater spells out, their bailiwick is higher level material and not as has become the case nowadays of pandering to the lowest common denominator and competing with SBS thus causing more money than was needed to be spent on events such as the Soccer World Cup rights.
It will be a relief when they start providing QUALITY programmes on some of the issues you mention such as “music, arts, culture, history, science, literature, children’s programmes, architecture, philosophy, religion, and a great deal more.”

You could try listening to Radio National and Classic FM.
Norman.

Elisabeth, I do listen to them and sometimes they’re as good as those on the old Radio 2FC programmes of the 1940s; but as is the case with the Sahara Desert, although there may be some wonderful oases, most of the time it’s not much value.
In any case, living on the NSW Central Coast as I do, since the previous Labor Governments made places such as Aurukun priorities for receiving FM, it’s only in my car that I have reasonable reception anyway.