From Abbott to Zed, which pollies copped the most mentions in Australian media this year?

In our 2015 year-end wrap, there are no prizes — oh, go on, have an onion — for guessing who topped the list for media mentions, with former prime minister Tony Abbott placing first with nearly 2 million mentions on traditional media and over 3 million mentions on social media.

Starting with the controversial knighthood of Prince Philip in January and ending the year as a backbencher, Abbott has stayed in the media spotlight months after being deposed, remaining second or third on our recent weekly indexes. Despite laying low in the Communications portfolio for most of the year, the new PM Malcolm Turnbull placed second overall, although a long way behind Abbott, after two leadership spills and lengthy speculation over whether he would challenge Abbott.

Our “other” Opposition Leader Bill Shorten is only joined by three of his Labor colleagues in the Liberal Party-heavy index, with Shorten himself mentioned over half a million times this year in Australian media. His colleagues Victorian Premier Daniel Andrews, Queensland Premier Annastacia Palaszczuk, and shadow treasurer Chris Bowen, placed eleventh, eighth and 19th respectively. Former treasurer Joe Hockey was dropped from Cabinet by Turnbull and was last week announced as Ambassador to the US, while Scott Morrison was named Treasurer after the second leadership spill. Elevated to the cabinet at the start of the year, Health Minister Sussan Ley made the list in 15th.

Foreign Minister Julie Bishop was deputy leader under both Abbott and Turnbull, and had a busy year dealing with troubled relations with Indonesia, Russia, the ongoing crisis in Syria and Iraq and global climate negotiations. Christopher Pyne moved on from attempting to deregulate our tertiary education system to become Minister for Industry and Innovation after Turnbull became PM, while Annastacia Palaszczuk defeated Queensland LNP premier Campbell Newman in an unprecedented swing, coming from seven seats to take government, in what some media described as an early indicator of Abbott’s political future. Minister for Immigration and Border Protection Peter Dutton, up 10 places from 2014 into ninth place, faced criticism for Operation Fortitude and a poor-taste joke or two, and Independent Senator Nick Xenophon had an opinion on everything from submarine-building to same-sex marriage. 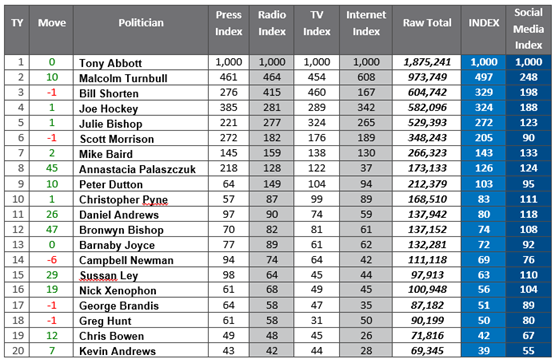 Tony Abbott was the topic of social media this year, with nearly every speech dissected and memed into oblivion. Mentions peaked during the second leadership spill, with nearly 150,000 in one week.

Despite what the polls say, on talkback not everyone loves the new PM. Meanwhile, former speaker Bronwyn Bishop snuck into the top five most mentioned MPs on talkback due to Choppergate in the middle of the year.