Correction Stephen Mayne writes: Re. “Mayne: NSW council mergers are well overdue” (yesterday). Graham Samson has indeed been critical of the decision not to merge Mosman with North Sydney, but I was wrong yesterday to say Mosman has been left standing alone in the NSW council amalgamations plan. Instead, the proposal is to merge Mosman, Sydney’s […]

Stephen Mayne writes: Re. “Mayne: NSW council mergers are well overdue” (yesterday). Graham Samson has indeed been critical of the decision not to merge Mosman with North Sydney, but I was wrong yesterday to say Mosman has been left standing alone in the NSW council amalgamations plan. Instead, the proposal is to merge Mosman, Sydney’s smallest council along with the equally affluent Hunters Hill, with all of Manly and part of Warringah.

All boats, all the time

Walter the Water Rat writes: Re. “The nautical nitty gritty” (Monday).  David Hynd is wrong about the disputed length of Wild Oats XI because he misunderstands both the issue and the applicable rules. This has nothing to do with waterline length. It is about length overall (LOA) which is measured at deck level. Bear with me shipmates, this gets complicated…

The eligibility limit for the Sydney to Hobart Race is set by the Cruising Yacht Club of Australia in their Notice of Race. Paragraph 3.1.1 states that boats must have “an overall length (LOA) not more than 30.48 metres (100 feet)”. The Yachting Australia Special Regulations (applicable to all Sydney-Hobart entrants) note that LOA does not include pulpits, bowsprit, bumpkins etc.” But…

The Equipment Rules of Sailing (which provide the definitions for the YA Special Regulations) state at F.1.4 (c) that a bowsprit is a “hull spar” and, as such, must be “attached to the hull”, not be part of the hull.

Now look at this photograph of the new bow section of Wild Oats XI: 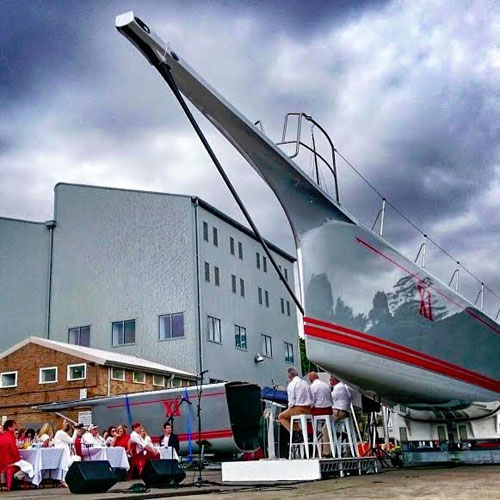 It is plain to see that the substantial curved portion which extends up from the bow to the bowsprit is laminated to the hull and forms part of the hull. It is not a necessary support for the bowsprit because there is already a strong bobstay in place to perform that function. Considerable flare has been built into the curved bow section to act as extra hull volume to counteract the boat’s previous tendency to nose-dive into waves.

All of this confirms the view that the new curved section is part of the hull and quite clearly means it should have been included in the measurement of its overall length. Being generous, the true LOA of Wild Oats XI is now around 105 feet, which makes it ineligible for the Sydney-Hobart race.

All the other maxi yachts entered for the race — Comanche, Loyal, Ragamuffin 100 and Rambler 88 — have vertical bows to conform with the hull length rule measurement guidelines that Hynd cited. Wild Oats XI does not. In fact, to achieve a rated LOA of 100 feet the measurer must have imagined a theoretical datum point at the spot where the implied extension of the vertical plane of the bow would intersect with the deck (which it doesn’t).

And laying all the rules and definitions aside, if adding this structurally unnecessary extra section beyond the 100-foot limit was not intended to improve the yacht’s performance, why do it at all?

Answers to the tabloid moniker quiz