Signatures that actually change things. As we come to the end of the year, we can only hope that the Twitter outrage machine also takes a break, at least for a couple of weeks. Interestingly the issues that made the biggest impact on petition website Change.org were actually very different than the daily anger churn. Change has released a list of its most successful petitions of the year, covering state and federal politics, getting drugs on the PBS and credit card surcharges. Interestingly, Change.org believes that while the majority of petitions started on the site relate to local government issues, the most successful ones relate to state and federal issues. The most successful petition for the year, with 172,000 signatures, resulted in a drug that treats melanoma being added to the PBS. But the biggest petition of the year is yet to be called a victory. A petition calling for medical cannabis to be decriminalised has more than 250,000 supporters, and although the federal government has announced it will move toward legalising medicinal cannabis, the campaigners won’t call it a victory until legislation is passed.

What do we pay you for? Most of think we pay our politicians to make decisions for the country, but over in the UK the Scottish National Party has decided, after doing its own research, that MPs have “wasted” six working days by voting since the general election in May. The SNP is using the stat to lobby for electronic voting, which is already in place in the Scottish Parliament. While the UK also has the Westminster system of government, UK MPs don’t just vote by crossing the chamber like here in Australia — they walk down “aye” or “no” corridors, which are known as lobbies. The SNP says this takes on average 15 minutes every time there is a vote. We think keeping the current system is also good for the pollies’ health — at least this way they get to get up for a walk every now and then.

Taking out the trash. Environment Minister Greg Hunt has approved the expansion of the Abbot Point terminal, with the condition that 1.1 million cubic metres of sand will be dumped in industrial land, not in the Great Barrier Reef marine park. The expansion means that coal from projects like the Adani Carmichael Mine could be shipped from the terminal. The expansion will increase the port’s capacity from 50 to 120 million tonnes a year and Hunt says the reef will not be affected. “The port area is at least 20 kilometres from any coral reef and no coral reef will be impacted,” he said. Did he think we wouldn’t notice?

Meryy Christmas, Mark Scott. ABC boss Mark Scott must be relieved at the announcement that Michelle Guthrie is taking over his role in May 2016 — after a long lead-up, the end is in sight. He posted this photo on Instagram yesterday, saying that he was pleased to receive the book of the scripts of ABC comedy Utopia. He said “they know I have been living it”. 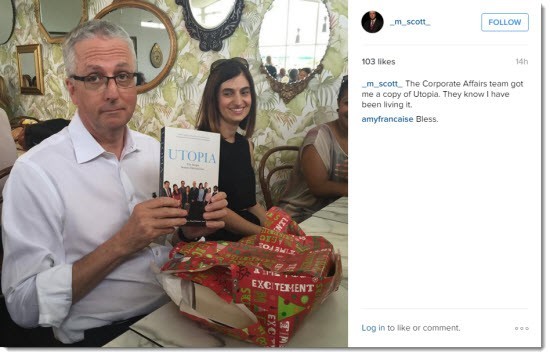 Trains canter and gallop along. Operator of Victoria’s regional train network, V/Line, has announced that it will name one of its trains after Melbourne Cup winning jockey Michelle Payne. We like the idea of a Payne Train, especially as Payne and her family are true blue country Victorians — hailing from the Ballarat area. Although one tipster did point out to Ms Tips that it could equate to false advertising — the Payne Train would need to run on time and not break down, and we’re not sure any public transport in Victoria can completely live up to that promise. We’ve already had the Hayne Plane this year — although Aussie Jarryd Hayne is still struggling to make a mark on the NFL in the US, hopefully the Payne Train fares better.

Is that all zinc? The IPA’s Chris Berg writes today that to attack cultural appropriation is to attack culture itself, saying that the food we eat and the symbols we use are all part of cultural appropriation. Ms Tips enjoys both yoga and wearing a sombrero for sun protection, so we’re mostly on board with Berg, but we’re not sure we can stomach this man dressed as a “red-skin” at the Big Bash yesterday: 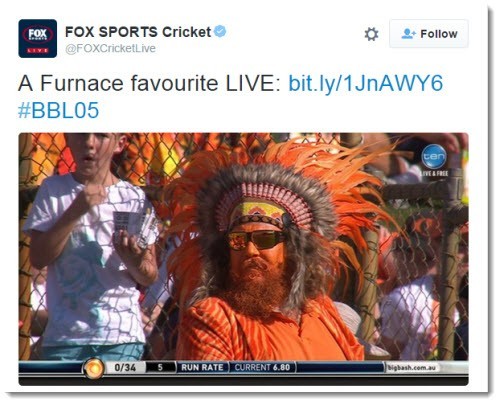 In defence of Christmas. Speaking of the IPA, it wouldn’t be Christmas without someone telling us Christmas was under attack. This year, “Victoria’s public schools are the frontline in the war on Christmas”. Or, so says an IPA director (and, while this isn’t declared in the column, national Young Liberal president) Simon Breheny.

For those outside Victoria, the Labor government there scrapped the controversial chaplaincy program in its schools in August. To replace it, the government has released new guidelines for special religious instruction, which require it be delivered during lunchtime or before or after school. The guidelines characterise “praise music” as religious material suitable only for outside school hours, but “carols” as fine. State education minister James Merlino slammed comments from the Liberal opposition that the government was trying to ban Christmas carols as “misinformation”. “Traditional Christmas ­carols have been and will continue to be sung at Victorian government schools, along with other activities, such as colourful celebrations during Diwali and candle lighting during Hanukkah,” he said. Back to Breheny:

“This is a cultural turning point. The Victorian government isn’t just banning Christmas carols; this is an attempt to strip away the meaning of Christmas. It’s an overt attack on one of the most significant events in the Christian calendar.”

So because it banned religious instruction delivered by taxpayer funding through outside contractors during school hours, something you’d imagine the libertarians at the IPA would fully support, the Andrews government is now engaged in a plan to “strip away the meaning of Christmas”. Yep, that makes sense. Merry Christmas everyone!

Royal baby photoshop. The internet conspiracy mill is questioining whether all is well with Princess Charlotte. The royal family released its Christmas portrait this week and there are whispers that Princess Charlotte doesn’t look quite right. No one is accusing the bub of not being cute enough, or her cheeks not pinchable enough, but it has been pointed out that her smiling face is focused differently to the rest of her family. Was a crying Charlotte swapped for a more happy princess? 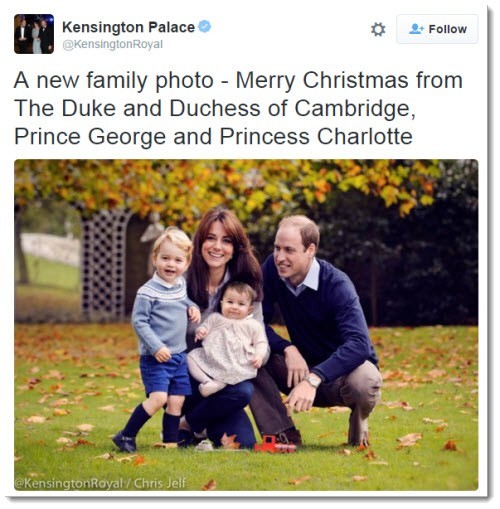 Just a heads-up to Miss Tips.
The Paynes from Ballarat are actually from Noo Zulland.
We have a long & fine tradition of claiming Kiwis as Aussies when they are successful.

Hi Stozonomo, yes the Payne family is from New Zealand, but Michelle was born in Ballarat, and has often spoken of the influence of growing up in the area, so maybe we can claim her as ours!

I hoped that ‘taking out the trash'(why the amerikanism?)referred to the truly appalling ghunt being binned.
Alas, no.