How many Ts in Abbot? And other media tidbits of the day.

“There was a three-part, three-night series, Strippers, filmed in various Scottish lap-dancing clubs. To show a bit of cultural diversity, there was an Australian who showed what it was like to work in an Australian brothel and a program on A very British brothel.

“Nor is the ABC sexist because there was another program called Male Hookers Uncovered and one on transgender called Ladyboys.

“Friends of the ABC will tell you that its role is to broadcast programs that the commercial networks won’t. In this case that was probably true. A commercial network would not be game to run programming like that every night for a whole week.

“But let me ask whether Australia would be the poorer if taxpayers’ money was not used to put this stuff to air?”

Coal for Christmas. The government chose today to announce approval of the controversial Abbot Point port expansion. It’s the top item on the Oz’s website this morning, but have the subeditors gone on holiday early? Early this morning, it was spelt correctly as “Abbot Point” twice in the copy, and incorrectly as “Abbott Point” another two times (and wrong in the headline). By the time we hit our deadline it had been fixed … 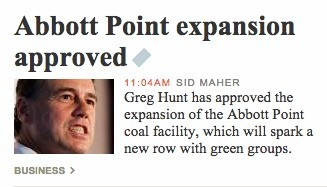 What future for foreign correspondents? Correspondents young and old considered how their craft is changing last night on the ABC … 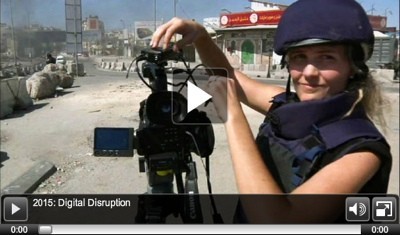 Front page of the day. Fresh from her Dancing with the Stars win, Bindi Irwin on the front cover of The Australian Women’s Weekly … 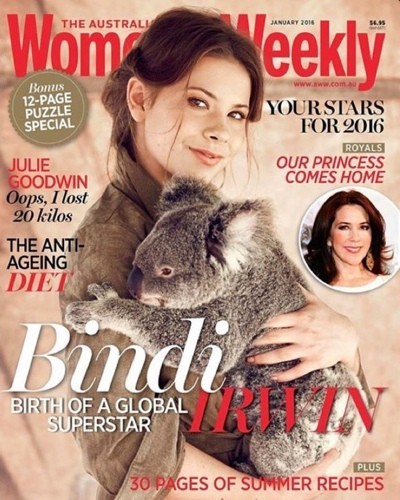 To “expert” Peter “The Velvet Worm” Costello whining about the price of morality :-
“How much has Iraq cost?”
“How would we be placed now, if the revenue from the mining boom had been used for investing in the present future – rather than you, Howard and the rest of the party, pissing it up the wall of “Tax Cuts for Electoral Popularity”?

Re Mr Costello and ABC porn, perhaps if federal governments of both persuasions weren’t in a constant war with the public broadcaster, screwing it financially whenever possible, it could afford to broadcast better programming. The stuff he complains about isn’t to my taste either, but the ABC’s entertainment programming is largely dire these days, with a few home-grown exceptions. The loss of so may BBC gems to Foxtel is particularly sad. And the prospect of a more commercial approach under its new boss if worrying. I’ve just been in New Zealand and TV there, where advertising is so intrusive, is awful and inescapable. Be warned.

There was a time when the ABC under the leadership of genuine Left Wing radicals such as Alan Ashbolt set high standards; but that’s long past, isn’t it.

If he was fair dinkum he’d be urging the current Cabinet to strip off, oil up and save the ABC a few bob with some DIY content. Apparently the PM is quite the titillating drawcard with even The Yoof demographic…

Dunno about Oz subeditors (if such still exist)going off early but today’s Crikey has had more typos. and fractured sentences with missing words than the rest of the year combined.
Not complaining mind, it’s easy enough to skip or autocorrect but glass houses are fairly fragile.
Thanks for another year of excellent reportage and analysis.