When the personal truly is political

Crikey readers discuss politics and other issues of the day.

Don’t blame the Nazis for Fanta

Russell Bancroft writes: Re. “Quantum physics, the tyranny of stop signs, and why the hell was Tab discontinued?” (Friday). Dear Guy. The Nazis did not invent Fanta. It’s an urban myth.

Mark Freeman writes: Guy Rundle was far too kind to Francis Fukuyama. I’d returned to study in the early 90s and End of History was getting talked up big time. When I finally got around to reading it I was underwhelmed to say the least. My memory is of a fairly short, thinly referenced, unconvincing and decidedly undergraduate level piece. I thought the same when re-read it ten years after. I really couldn’t understand what the big deal was. I realised later that it was both sufficiently academic and simple to appeal to neocons, voters and the commentariat. If ever there was a flash in the pan belonging in the dustbin of academic history that was it.

Getting down to the nautical nitty gritty

David Hynd writes: Re. “Messing about in boats” (Friday). The curved section is a supporting structure for the bowsprit.  It does not increase waterline length.  On other boats there is sometimes a separate spar attached to the leading edge of the bow and to the bowsprit.  This is the same arrangement except it’s gel coated. The bowsprit is NOT measured under IRC, so hull length is measured from the vertical of the leading edge of the bow. This is the relevant section of the IRC measurement handbook.  LH is the Hull Length.

This is best done ashore. Owners should be informed in advance that the boat has to be set up level with the waterplane in Measurement Condition, which is a task that has to be performed before the measurer arrives. Hang plumb bobs on the centreline over the bow and stern. Measure from a convenient point on the keel or underbody to each plumb line and total for LH.

The day the music died

Chris Duckett writes: Re. “This. Sick. Beat.” (Friday). It doesn’t matter how many gigs Albo shows up to in a Pixies t-shirt, all right-thinking mainstream Australians who are indy music listeners will never forget the day music in Albo died: 17 June 2014. 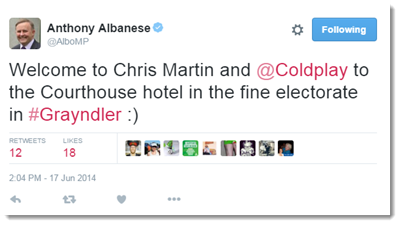 May it rest in mylo xyloto.

Usman Mahmood writes: Re. “Memo to white men: Abbott’s bigotry and inflammatory language not a free speech issue” (Friday). As an Ahmadiyya Muslim, I welcome legitimate advice of ASIO head Duncan Lewis to Australian politicians about their comments on Islam and admire the courage of our Foreign Minister Julie Bishop in wisely supporting Duncan.

It is important for our leaders and politicians to talk with wisdom and insight. Most Australian Muslims stand united with the government in fight against extremism, but if politicians will wrongly accuse Islam, they will lose support of peaceful Muslims.

We cannot establish peace and harmony in our society without observing equality, and justice. We should treat every member of our society with dignity and respect. Alleging Islam for the atrocities of Islamic State is not only against morality and justice but also a root cause of increasing anti-Muslim attitude in our society. Politicians should encourage building bridges with Muslims rather advocating hatred and divisions.  I welcome our politicians to follow motto of “Love for All, Hatred for None”.

Crikey end the year as it began, by continuing to publish poor quality items on issues where they ignore contributions by those with greater knowledge of and involvement in important issues.
Vale quality intellectual analysis at Crikey.