The government's already inept prosecution of the case for tax reform may be crueled by its lack of understanding of voter anger about multinational tax avoidance.

While Malcolm Turnbull continues his charming performance as Prime Minister, the government is ending the year in a mess on tax — the reform of which will notionally be its centrepiece for 2016, unless Turnbull decides to bolt for an election early on and leave the whole matter to be sorted out later. And Treasurer Scott Morrison increasingly looks like part of the problem rather than part of the solution.

Morrison’s first issue is his rhetorical obsession with a hardline fisal position that the government won’t accept an increase in taxes — manifest not merely in his mantra “we don’t have a revenue problem” but in his attempts to negotiate a tax reform package with the states in which he refuses to countenance any increase in the GST to offset the Commonwealth’s $80 billion cuts to state and territory health and education budgets.

Morrison has impressively found not just one but two ways to be wrong about revenue: the “we don’t have a revenue problem” line has been elegantly counterpointed by his having to reveal last week a collapse in revenue of over $30 billion over forward estimates since May. And the whole “we don’t raise taxes, Labor raises tax, we don’t raise taxes” line continues to be contradicted by his own budget papers, with MYEFO showing that tax revenue will still go from the 22.3% of GDP that the Coalition inherited from Labor to 23.6% of GDP in 2018-19. 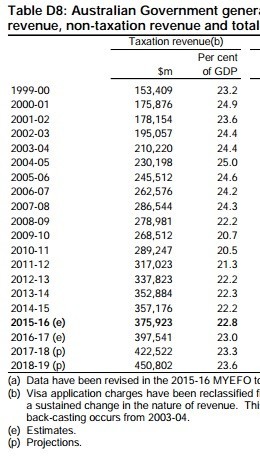 What did Morrison say in November? “We don’t want to see the tax burden increased on Australians, we don’t think the way you grow your economy is by increasing the tax burden.” Just so, Scott.

While Morrison takes the long fiscal road to nowhere on a family holiday from hell, the specific area where his rhetoric is having an actual impact on policy is in the tax debate with the states.

In the lead-up to his meeting with state treasurers two weeks ago, Morrison insisted that he’d abandon any discussion of a rise in the GST if the states wanted to use it to make up for the massive cut in health and education funding announced by Tony Abbott and Joe Hockey in the 2014-15 budget. Instead, Morrison’s idea of tax reform was a pea-and-thimble trick in which a GST rise would be used only to pay for lower taxes elsewhere — like income tax cuts.

But the states cleverly countered Morrison’s attempt to hijack what is supposed to be a states’ tax. South Australia proposed that Morrison get to achieve his GST hijack — but at the cost of the states getting a guaranteed 17.5% of income tax. Why is that appealing to the states? Let’s again turn to the MYEFO papers, which give us updated figures for expected GST revenue over the forward estimates. They show GST growing by just under 18% in nominal terms over the next four years to $70.5 billion. But income tax receipts are forecast to grow by nearly 22% over the same period — and that’s at a time of lower economic growth, lower commodity prices and weak wage rises. Unless the one-time “growth tax” is extended to areas like health and education, where spending is growing much faster, a share of income taxes would provide the states with a faster growing source of revenue, even after Morrison’s accounting trick of swapping a higher GST for lower income taxes.

And while Morrison has never actually explained what the point of tax reform is beyond the motherhood goal of faster growth and more jobs, or how tax reform would achieve those, he and Turnbull now face a greater challenge in explaining to voters the need for whatever measures they end up putting forward: widespread and egregious big business tax avoidance. The issue had already soared in public consciousness, but last week’s release of the extraordinary list of high-profile local and international companies that literally pay no tax will only make life more difficult for the government.

The Coalition has a reputational problem here: voters think it’s too close to the top end of town. Essential Research found in September that two-thirds of voters think the Liberal Party is “too close to the big corporate and financial interests”. Moreover, voters — regardless of how they vote — want multinationals to pay more tax. Nearly three-quarters of both Labor and Liberal voters believe they don’t pay enough tax. And well over half of voters think large corporations don’t pay enough tax either.

In that context, Joe Hockey’s half-baked multinational tax plan — the one where he wouldn’t even put revenue numbers to the measures — isn’t going to cut it. Voters are constantly reminded that some of the highest-profile companies in the country are paying no tax on billions in revenue, and the government appears to have no interest in doing anything about it — but plenty of interest in listening to the Business Council of Australia demanding lower taxes for companies (below zero, one assumes, for many of their biggest members).

What tripped up Hockey and Abbott was fairness — the perception that the 2014-15 budget was targeted at low- and middle-income earners. The perception of fairness is fundamental to convincing voters of the need for reform; even if it’s painful reform, voters will be more receptive to it if they believe the burden is being fairly distributed. Turnbull and Morrison have a major problem with perceptions of tax fairness and it’s unclear whether they understand it — or whether the Liberals’ big business mates and large donors have helped them disconnect from political reality.

If left unaddressed, the issue may not merely cruel voter support for tax reform, but deliver Labor a potent weapon to use against the Liberals in 2016. 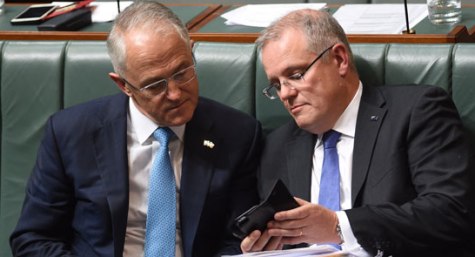 State income tax: a political problem in search of an economic solution 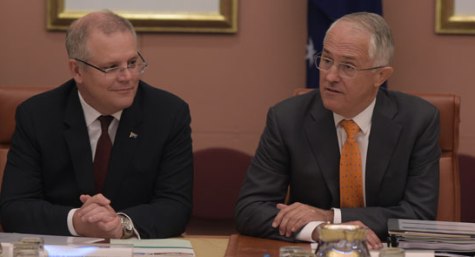 Isentia Index: Will election 2016 be another GST referendum?

I wonder if some politicians believe that IQ is not uniformly distributed so that lower income groups do not understand what is done to them.

On the political evidence it may be that the IQ distribution is just the opposite of what the current government seems to believe.

Still waiting for the MSM to start asking hard questions on this issue (and a multitude of others) and not settling for non-answers or misdirection.

You guys smoothed the way for Abbott to hoodwink the Aussie electorate until it became so obvious that you couldn’t hold back the torrent of negative sentiment.

Has the Aussie media no shame?

This is the thing, the sooner we hear and the more we hear about what’s going on the more riled up we will become with much of corporate Australia.

“two-thirds of voters think the Liberal Party is “too close to the big corporate and financial interests”.
The other third are LNP member that want it that way.

”but plenty of interest in listening to the Business Council of Australia demanding lower taxes for companies (below zero, one assumes, for many of their biggest members).”
and getting rid of the minimum wage and penalty rates so they can screw the PAYE workers in this country.
If Labour wants an issue to win an election, this article has given them two.