The 2015 Crikeys: Andrew Bolt sook of the year

The best, the worst and the sookiest of media stories of the year.

From the moment Tony Abbott chose Australia Day to make a prince a knight, 2015 was a year of bewildering culture wars. And culture wars are good for one thing: generating news about the media, of which there was plenty this year. This was the year where the political cycle spent three weeks talking about a TV show. The year a soccer writer got fired for mouthing off about Anzac Day on Twitter. A year where the prime minister demanded the ABC justify whose side it was on, while the News Corp tabloids played a pivotal role in ending his government.

But it wasn’t all fire and fury. For the best, the worst, and the most amusing of the media in 2015, read on.

Most constructive media campaign of the year. While some were further ahead than others, almost all the major media outlets in Australia this year thoughtfully covered the domestic violence crisis. Regional papers across the country ran concerted campaigns about domestic abuse, encouraging victims to go public; the Herald Sun convinced a range of influential men to front campaigns against domestic violence; the ABC and The Guardian helped give a name and personhood to those whose domestic abuse turned fatal; freelancers like Jess Hill in The Monthly and Radio National did important and immersive work; and ABC television’s Hitting Home shone a light in very dark corners. Outlets, highbrow to tabloid, have this year changed how they consider and cover domestic violence. It’s hard to imagine ever returning to the days where domestic abuse was a private affair, rarely covered and little understood.

Story with the biggest political impact. In July, the Herald Sun ran a story by Annika Smethurst (on page 5) about how speaker Bronwyn Bishop had charged the taxpayer for a helicopter flight to a political fundraiser. As Bishop refused to apologise or show any contrition for the trip (something she still refuses to do), the scandal got bigger and bigger. As the nation’s News Corp tabloids ran reams of coverage on the issue, we called it the Abbott government’s first real tabloid scandal. Bishop would eventually pay with her job, while Abbott, who defended her for three weeks, wasn’t able to separate himself from the actions of his speaker. The whole saga also provided us with some of the best front covers of the year. Our favourite was probably this one … 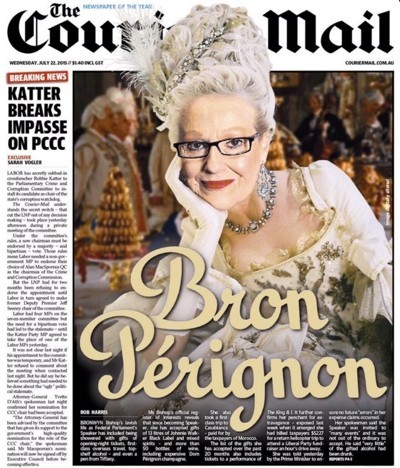 But back to the gong. The story with the biggest impact, which actually cost Abbott his prime ministership, came courtesy of The Daily Telegraph, and it was probably planted by his own side.

On September 11, the Tele ran a story by Simon Benson and Daniel Meers about six ministers who were likely to lose their roles in a cabinet reshuffle. Journalists don’t give up their sources, and we’ll probably never know for certain who the Tele’s source was. But the perception in Canberra was that the story had been planted either by Abbott or his supporters, with many blaming chief of staff Peta Credlin. If so, it certainly backfired, putting urgency and weight behind moves to depose Abbott (ironically, three of the six ministers named in the piece — Kevin Andrews, Eric Abetz and Ian Macfarlane — did end up losing cabinet positions under Turnbull).

Most amusing newspaper tiff. Andrew Bolt spent much of the year growing more and more frustrated with News Corp stablemate The Australian. First the paper claimed Tony Abbott wanted to send troops overseas to fight Islamic State; a claim Bolt said was without foundation. Then the broadsheet took the view that those who booed Australian of the Year Adam Goodes probably did so because they were upset at his speaking out on race. Bolt disagreed. And then he was unhappy about the Oz’s support for recognising Aboriginal Australians in the constitution. All up, it made for fascinating reading.

By September, Oz editor-in-chief Chris Mitchell had had enough and hit back at Bolt through his paper’s media section. “Bolt’s audience includes many conservative retirees whereas The Australian’s readership is younger, rich, better educated and working in legal, political or the business community,” he said by way of explaining why his paper had taken such different positions on such issues. “These people don’t read the Tele or Bolt.”

To which Bolt hit back:

Mitchell’s no longer editor-in-chief at the Oz (more on that later), but he’ll be writing a column in that paper’s media section in 2016. With any luck he’ll find a regular sparring partner in Bolt.

Biggest sook. While we’re on the topic of Bolt, let’s all take a moment to remember the other entertainment he provided this year. When Abbott lost power, he spent months in mourning. It’s worth rereading this piece on Andrew Bolt’s five stages of grief.

Best term coined by the media. There are Walkleys, Quills and Kennedys for just about everything you can do in the media, but there isn’t a gong for coming up with a snappy phrase. So we’ll leave it to others to recognise fantastic reporting and content ourself with this. From news.com.au this year came the phrase “Antarctic vortex”. You might have read it elsewhere — it was very popular — but it owes its genesis to Anthony Sharwood. He’s since moved to the Huffington Post.

Apology of the year. While not strictly a matter of coverage, the three-year old Kennedy Awards managed to send the wrong person home with the gong. After the wrong list of names was sent to the engraver, The Guardian’s Mike Bowers took out a photography award instead of the SMH’s Nic Walker. When the awards finally got in touch with Bowers a few days later to tell him they’d got it wrong, he swore he’d never enter again. His editor didn’t seem too impressed either.

Meanwhile, when a young woman died of a drug overdose at the Stereosonic Music Festival, The Daily Telegraph put the wrong woman on the cover. It appears the Tele took a photo off a public Facebook profile, but other outlets had been reluctant to use the image as the profile looked fake. The stuff-up had shades of what had happened at The Age a few months earlier, when it took a picture of a teen believed to be suspected terrorist Numan Haider from a Facebook page. The photo wasn’t of Haider, who’d been shot dead by police in 2014 after attacking a police officer with a knife, but of Abu Bakar Alam. The Age ended up splashing its apology on the front page, as part of what was no doubt an expensive settlement that also included a $20,000 donation to help build a new mosque. It’s one of only a handful of times globally a newspaper has apologised in so prominent a manner. 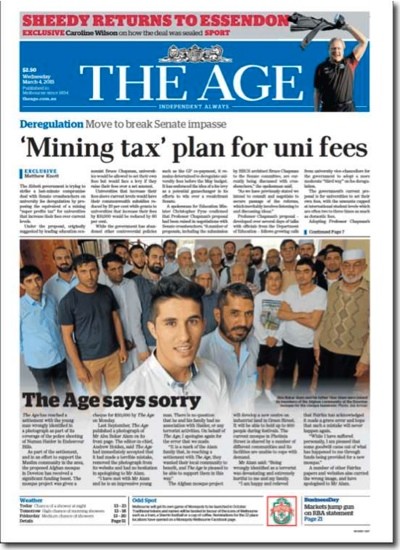 Dumbest complaint to a press adjudication body. Somebody complained to the ACMA after Rage aired the video clip of Hozier’s Take Me To Church, arguing the clip contained violence and smoking. Go figure — the clip tells the story of a gay man being brutally bashed after being ambushed by a group of thugs who’d earlier seen him with his lover. ACMA ruled the video fine. 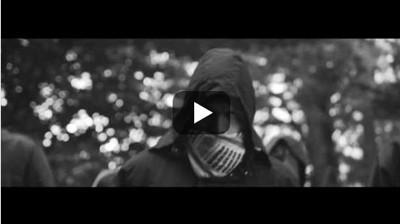 Biggest editorial shakeup. This year The Australian‘s formidable editor-in-chief Chris Mitchell finally stepped down from that paper. As Guy Rundle has previously argued, during his tenure, Mitchell sharpened up the paper, editing in a way that was bolder, more interesting, and, for some, utterly insufferable to read. Love him or hate him, he was certainly a giant of the Australian media. It’ll be interesting to see how his successor, Paul Whittaker, changes things up — he’s already beefed up the Clover Moore coverage at the Oz.

But back to Mitchell. His paper was embarrassingly good at singing his praises, so you’re probably already familiar with them. But because he’s gone, here’s something nice about Mitchell you won’t read in The Australian. Mitchell was a man who took his critics head on, and who was always willing to defend what his paper did or didn’t do. We didn’t always agree with his reasoning, or his methods, but your correspondent always respected his willingness to engage. It’s not a trait he shares with many other editors in the country.

There will be yet more impactful departures next year. We already know about the impending departure of Mark Scott from the ABC (it’s been announced this morning that Michelle Guthrie will take over from May). Change is coming for Fairfax as well. Greg Hywood has been CEO since early 2011, which wasn’t all that long ago, but tongues are beginning to wag about his departure. Could Domain chief Anthony Catalano be his replacement? Now that would be a fun redemption story — Catalano famously bled Fairfax of millions in real estate advertising when he left to found his own media group, which he then sold back to Fairfax (a Fairfax senior manager famously described him as “a turncoat” and “no friend of Fairfax”).

Meanwhile, News Corp has seen off CEO Julian Clarke, but the arrangement replacing him doesn’t look all that stable to us. News Corp Australian now has two chiefs — a somewhat odd structure in which both Michael Miller and Peter Tonagh are to rule more or less side-by-side. It’s a clunky arrangement — who knows if it’ll last.

Most constructive media campaign. You just have to take your hat off to Rosie Batty – what a magnificent person she is.

The Australian; insufferable to read? Absolutely.

When the Crikey Commissariat bestow the “award” they did on Andrew Bolt, it has to be said that unwitting as it may have been, and this can be said of numerous Crikey efforts, they unwittingly gave him the highest possible praise, didn’t they.

Surely it’s time for a BLOT Award, for the most tendentiously mendacious, biased and ignorant specimen of journalism?
It would be a very crowded field and can only become more so.

Where’s the No mans Hand comb award for continual carping criticism of all things Crikey ? The recipient would need to be regularly incoherent, must never provide links to back up their opinions and be ready to leap to the defense of shock-jocks,rabid conservative commentators and Murdoch hacks at short notice.
One nominee springs to mind.