Nobody can stop the music … except Border Force. Recently strengthened laws to stop employers rorting 457 visas by asking overseas workers to pay for sponsorship has had the unexpected consequence of an added workload for music promoters trying to get international acts into Australia. The rules, brought into effect on Monday, are designed to make it an offence for Australian employers making potential employees pay to be sponsored for the chance to get to Australia, or to offer the chance of permanent residency with a 457 visa. The change has taken the music industry by surprise, though, with promoters told that all visa applicants under the 420 visa — the one most used by touring musicians — must physically sign a declaration form and get it to Border Force to go with their application. Ms Tips understands that the changes have completely overwhelmed the workload of promoters at such a busy time, with many musos coming to Australia for the summer festival season. Know more? Drop us a line; you can remain anonymous if you wish.

Messing about in boats. It didn’t take long for The Australian to pick up yesterday’s Tips story on the looming scandal over the eligibility of Wild Oats XI for the Sydney to Hobart Yacht Race. The Oz piece ran as news, splashed over six column on page 3 (not that they acknowledged us by name, preferring to describe Crikey as “an Australian website”. How gracious).

Rather than follow up the explosive allegation that the recently rebuilt Oats is now longer than the 100-foot (30.48m) limit for the Hobart race, reporter D.D.McNicoll simply went to the race organisers and the skipper of Wild Oats XI for reaction. Both adopted the Watergate defence: total denial. 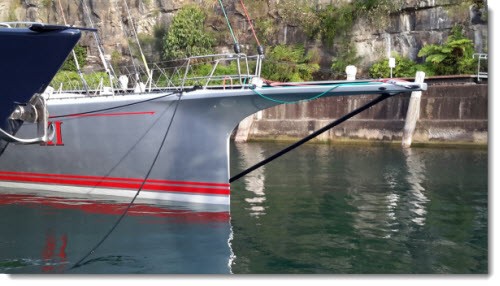 Commodore of the Cruising Yacht Club of Australia, John Cameron, said that the boat had a valid rating certificate stating that it was not more than 100 feet, and “that is the end of the matter”. Mark Richards, who has been skipper of Oats for a decade, told the Oz: “She is not too long. It is measured and approved.”

Nobody denies the yacht has been measured or that a certificate confirming compliance has been accepted by the CYCA. The issue, rather, is whether Wild Oats was measured correctly. The top section of the new curved bow of the hull clearly extends beyond the 100-foot limit. So where did the measurer place the end of his tape?

The rules of yacht racing allow for protests, and that is the most likely next step for any opposing crew with the courage to take on the might of the Wild Oats organisation. A protest of this nature would be heard by a committee nominated by the sport’s governing body, Yachting Australia. For many years one of the major sponsors of Yachting Australia has been Robert Oatley Wines. Robert Oatley is the owner of, er… Wild Oats XI. This could get ugly.

This. Sick. Beat. What is Anthony Albanese doing with his Christmas break? This video of Albo DJing next to SBS’ Lee Lin Chin is a bit of a hint, but if the beats in the four-second clip are anything to go by, we are concerned that Albo may be moving away from his good taste in classic music: 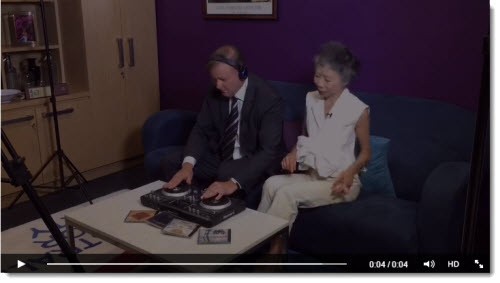 The continuing legal adventures of David Barrow. Late last year, the Victorian Supreme Court threw out a defamation case brought by lawyer and accountant David Barrow against columnist Andrew Bolt (Barrow argued Bolt’s description of him as a “vexatious litigant” in a letter to the Press Council was defamatory). That case saddled Barrow with $500,000 in costs (discounted from the $825,000 News Corp says it spent defending the case), and Barrow told Crikey he’d go bankrupt if he had to pay that amount, though he felt he’d won the moral battle.

Barrow launched an appeal to the High Court in July, as well as further defamation action against the Herald Sun’s coverage of the trial. But on Monday, he announced he’d settled with News Corp, relieved News Corp had to spend what he estimated to be $1 million in costs while he avoided spending big money himself (he says he only spent $1000 on the case and didn’t and won’t go bankrupt over it — “it only took four years in the trenches … and plenty of fighting spirit”, he says).

Barrow has now set his sights on other targets. On Wednesday, he published to his blog an open letter to NSW District Court Judge Judith Gibson, an expert on defamation who’s presided over several high-profile cases, objecting to the way she’d described him in a March paper delivered to the State Legal Convention examining recent issues in defamation law. In a section examining the legal costs of defamation, she made a passing mention to the “unsuccessful (and now bankrupt) plaintiff who sued Andrew Bolt”. The footnotes reference the Crikey article where we wrote Barrow intended to go bankrupt, so it appears this was the source of the claim.

But because he never actually went bankrupt, Barrow now wants “non-litigous amends” on the issue. He says it’s easy to check the insolvency register, which he is not on, to show he is not bankrupt. As a registered CPA accountant, a claim that he is bankrupt could have professional ramifications, he argues. “Given that your Honour has caused a false statement that I am ‘now bankrupt’ to be published to the world at large, and your Honour’s standing as a defamation expert, I believe the outcome of our situation should be made public,” he wrote. He has invited Gibson to fly down to Melbourne to sort the whole thing out. We’ll keep you posted on what happens.

Now that’s how you FoI. He’s been dubbed “the most hated man in the world” and now Martin Shkreli has been arrested on fraud charges. Shkreli was launched into public consciousness this year after he acquired a pharmaceutical company and greatly increasing the price of a lifesaving drug, but today’s charges are unrelated to that. Shkreli was also in the news this year for reportedly paying $2 million for the only copy ever to be released of the latest Wu Tang Clan album Once Upon A Time in Shaolin. Writer Andrew Wiseman used the opportunity of Shkreli’s arrest to make a Freedom of Information request to the FBI asking for the album to be released under the laws: 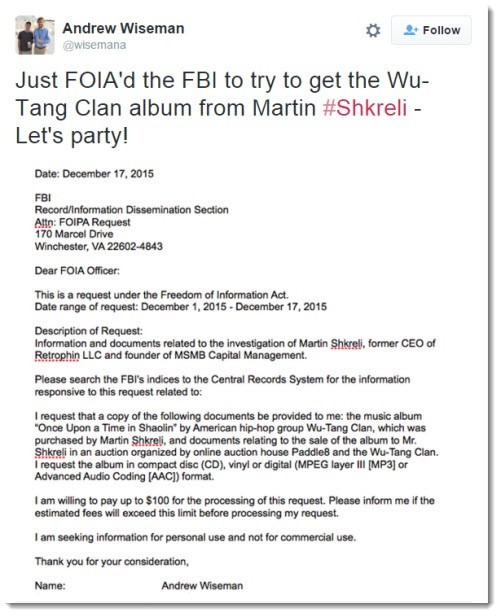 The FBI resaponded on Twitter though, saying that as they did not have a seizure warrant, they didn’t have the album:

Soundwave shredded — and not in a good way. Yesterday we reported that the Soundwave music festival was on the verge of collapse, and by the end of the day, the festival had crashed over a cliff, with promoter AJ Maddah announcing the festival wouldn’t go ahead due to poor ticket sales. Then the real shitstorm began, with Maddah claiming that ticketing company Eventopia was responsible for refunding fans for their $172 tickets, and Eventopia saying it was Maddah who had to pay up. Music Feeds has reported that the festival’s demise reads “like a Shakespearean tragedy, the seeds of the festival and its promoter’s downfall seem to have been sown – ironically – when both were at their peak”. Music feeds also reports that Maddah’s creditors will now receive about 3 cents in every dollar loaned to him.

When I grow up I want to be a faceless man. A tipster tells us that at a primary school in Thornbury in Melbourne’s northern suburbs, one of the awards to be given out at the grade 6 graduation on Wednesday night was the “David Feeney Award”. Thornbury sits inside Feeney’s electorate, but we do wonder what kind of attributes a student would need to display to get the award named after Feeney.

Such a sexy scandal. As Ms Tips has been promising all week, the winners of the 2015 Crikeys have been announced in today’s newsletter, but we hear that supporters of one of the entrants were planning on exploiting the voting system to promote one particular male deputy leader of the Greens. We can assure you that the votes have been counted thoroughly and the winner did not get there undeservedly.

I thought I’d have a look to see if any subscribers deemed this collection worthy of a comment, but the cupboard was bare.

Alas if only you’d asked a yachtie. The protruding section from the bow on Wild Oats IX is called a bowsprit. And bowsprits are not included in the measurement of length overall for ocean racing formulae. Indeed bowsprits are one of the oldest, legal, tricks in the sport to extend the length of a yacht without it being included in the rating formula, predating winged keels by many many decades. They have become less common in modern times, maybe the Oatey’s are bringing back an old trend.

If there is any dispute it will be down to whether the bowsprit is actually a bowsprit, and at what point the bow stops and the bowsprit begins.