Scandal brewing before the Sydney-Hobart Race. An apparently offhand question posed yesterday in a forum post on an obscure American sailing website could well snowball into a huge controversy that could engulf some of the most respected Australian names in the sport. Responding to the impressive appearance of the recently rebuilt maxi-yacht Wild Oats XI, “Duncan” wrote:

That one short post makes public a potentially explosive issue that so far has been kept hidden by the yachting authorities. Wild Oats XI is the most successful ocean racing yacht in history. Built to the international maximum length of 100 feet (30.48 metres), it has won eight Sydney-Hobart races and recently won the 2400-mile Trans Pacific race. It is the plaything of wine squillionaires Bob and Sandy Oatley, and they have spent countless dollars on constant modifications to keep it at the front of the fleet. The head of the Oatley development team, Ian Murray, and the yacht’s skipper, Mark Richards, are both sailing legends.

But when the boat emerged last month from the builder’s shed after yet another rebuild, WOXI had a new profile. Instead of the normal straight or “plumb” bow, it now has a curved top section at the front of the hull to support the bowsprit (a spar that extends beyond the bow from which the spinnakers are set). Some waterfront experts who believe they know the rules of how yachts are measured were quick to pose the question: where does this new hull actually start? If the bowsprit is now permanently joined to the bow, doesn’t that make it part of the hull itself?

That question is dynamite because 100 feet is the absolute maximum length overall (LOA) a yacht can be to remain eligible for the Sydney-Hobart Race. If the new extended bow on Wild Oats XI is found to be part of the hull, then the yacht is much longer than 100 feet and can not be accepted as an entry in the race, which starts on December 26. Wild Oats XI‘s media manager answered our query about the length of WOXI quickly, saying that the 100 feet rule applies to the “waterline” length of the boat, not including the extra length of the bowsprit. He emphasised the experience of the team that has developed the yacht. There’s only one mention of waterline lengths in the Sydney to Hobart Notice of Race, and it refers to a minimum waterline length, while the maximum is measured as length overall. Could they have got it wrong? That’s a story that would move very swiftly from the sports section to the front page.

Soundwave trembles and teeters. The music industry is bracing for another huge shock, with the news yesterday that punk and metal festival Soundwave will be definitely be cancelled after the 2016 tour, and next month’s tour might not go ahead. Controversial promoter AJ Maddah tweeted last night that ticketing company Eventopia “were supposed to give (Soundwave) a scheduled advance to pay deposits to NOFX and BMTH (Bring Me The Horizon)” but “their CFO changed her mind and decided not to make the advance but didn’t tell anyone. so we (SW & bands) waited and waited for $”. He described the issue as a “bad situation” and said “we cannot hold festival without their support”. Band Bring Me The Horizon had tweeted earlier this week that it was not a certainty that they would play at the festival. Eventopia released a statement earlier in the day to music news website Musicfeeds, denying that it was in control of whether the festival went ahead. The festival was already in a precarious place, with the previous operating company of the festival going into voluntary administration in October. In a letter to an unsecured creditor, seen by Crikey, Maddah promises that profits from this year’s festival will go towards paying off debts, which are estimated at approximately $25 million. More than $6 million is owed to the Tax Office and the Office of State Revenue. Both Harvest Festival and Big Day Out festival were both discontinued under Maddah’s watch.

Voters and punters get ready. There is less than 24 hours left to vote for the winners of the 2015 Crikeys, and for the first time, a betting agency is taking wagers on who will win the races of Australia’s sexiest male and female pollies. Politics has been described as “show biz for ugly people”, but Ms Tips (and evidently Crikey readers) think this is grossly unfair. While not all pollies are as suave as Malcolm Turnbull or Scott Ludlam, there is a certain charm for some in the personages of Jason Clare and Richard Marles. Gippsland in Victoria is possibly over-represented in the list of nominees, with both Darren Chester and Ricky Muir on the list. William Hill says this morning that odds have shortened on Ludlam, in to $11 from $15, but PM Turnbull is still the favourite at $2.25. New MP Andrew Hastie is on short odds at $2.50, while the Greens leader Richard di Natale is at $7 — way ahead of his Greens doppelganger Adam Bandt at $51. Deputy Labor leader Tanya Plibersek is leading the ladies’ field on $2, ahead of her Liberal counterpart Julie Bishop on $2.25. Voting closes at midday tomorrow, and the winners will be announced in tomorrow’s newsletter. You can vote here, and put your money where your mouth is here.

Abbott drinking assessment. It’s been widely reported by now that Tony Abbott walked into the Alexandria Hotel in Sydney for a drink, only to find himself deep in enemy territory — the South Sydney Greens Christmas party. A tipster has described Abbott as “rowdy”, noting that his pints were full-strength German beer, while others tweeted that he also enjoyed a glass of red. Abbott was challenged by Green Alex Turnbull on his views on “Muslim Reformation”, but responded politely. Our tipster tells us that the night ended with raised voices, though: “He stumbled out at 9pm drunk singing old tunes. Greens responded by singing the Internationale“. One Greens member even had this assessment of the ex-PM:

A big deal it is. In case you have been living in a galaxy far, far away and have managed to miss it, today is the worldwide premiere of the new Star Wars film, Star Wars: The Force Awakens. The franchise is now owned by Disney, which means everything from paper towels to fresh fruit has been branded with Jedis and Death Stars, and politicians and bureaucrats are trying to get in on the hype. The Australian Bureau of Statistics used the opportunity to show just how many Australians list “Jedi”as their religion in the census: 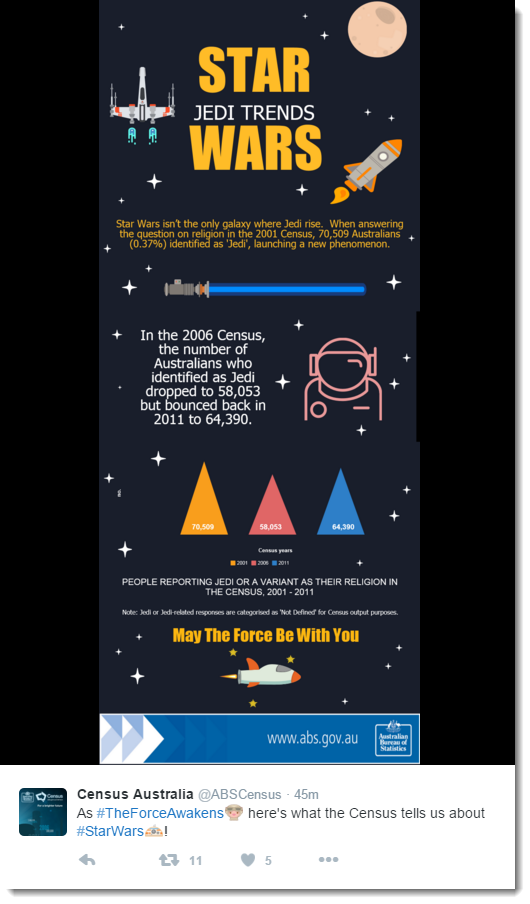 While the Australian Young Greens used this dodgy photoshop job to try and entice new members: 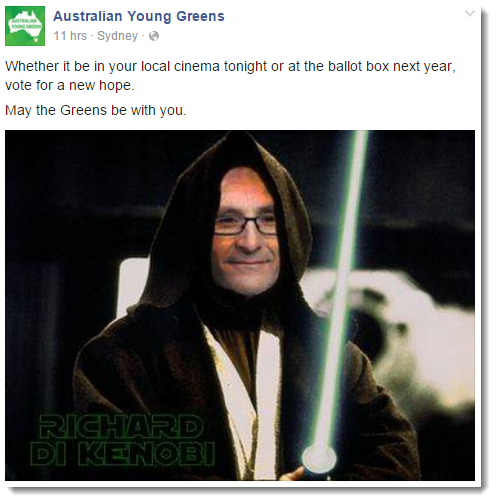 But the force seems to be with Senator Lee Rhiannon, tweeting this photo of her toys from the original series: 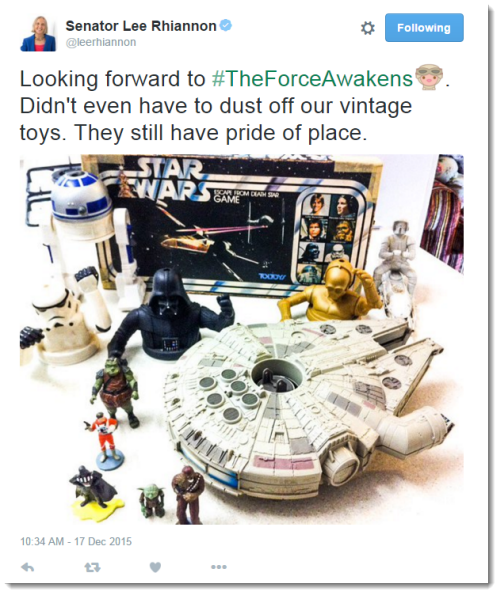 NBN cable not NBN-like. Optus has been forced by the ACCC to pay $51,000 in fines for claiming in advertising that its cable network offers “NBN-like” speeds. Apparently this cable, which is already in the process of becoming part of the NBN, did not in fact, offer speeds comparable to the NBN in the plan for the price mentioned in the advertisement. NBN will no doubt say that the network will be upgraded to offer these “NBN-like” speeds, but it is amusing in a month where the cable network has been under scrutiny after leaked documents suggested it might not be fit for purpose on the NBN (something NBN denies based on current testing).

Shorten brings in the herd. Labor leader Bill Shorten’s family Christmas card has made its way to the Crikey bunker, with a happy family snap, showing no dissenters like in Andrew Leigh’s family. 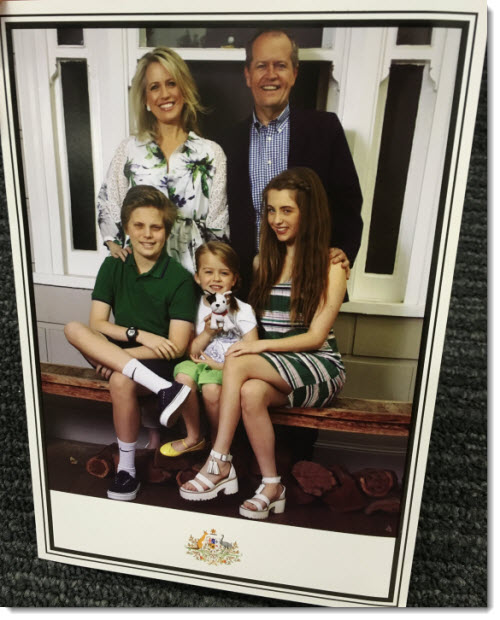 So in a pub full of alcohol fuelled Greens Tony Abbott was outnumbered. What odds would you give that in most working class pubs any vote between Abbott and the best of those Greens [even after they sobered up] would be a lay down misere for Abbott, with daylight second.

Perhaps the Oatleys should book the latest Wild Oats into a marina berth. They will soon know what the length of their new boat is.