Won't someone please teach The Australian some maths? Plus other media tidbits of the day.

Now that’s an apology. In the SMH today:

“The article ‘Humpty Dumpty’s not so charitable return’ published on December 5 incorrectly understated the amount of money paid to benefit children by the Humpty Dumpty Foundation.

“In portraying the money raised to benefit children, the article omitted to include about $10 million in fundraising — received in the form of paid pledges — over a 14-year period.

“The Herald accepts that pledges in the foundation’s accounts have in fact been paid by donors and used by the foundation to purchase lifesaving medical equipment for sick children.”

Stats 101. There’s a new fun game doing the rounds: how crap will Jennifer Oriel’s column be this week? The Oz‘s new resident kultur-warrior wowed the crowd a fortnight ago when she claimed that Robert Menzies had successfully banned the Communist Party 65 years ago (his failure to do so was one of the most important events in modern Australian history). Earlier efforts on Marcuse and “neo-Marxism” suggested that, ideas-wise, she was still in the remedial stream.

This week she does not disappoint, penning a love letter to … Donald Trump. How August 2015! Apparently his 41% rating among the 25% of the population who identify as Republicans means he has won the “silent majority”. I thought it meant he had won 10.25% of the population. But the maths gets worse: “And despite media portrayals of Trump supporters as rednecks a Rasmussen poll showed a majority of Americans [46%] support a temporary ban on Muslim immigration …”

Not sure where Oriel went to school, but sounds like the neo-Marxists got to the maths department first and replaced it with Stalinist Jazz Ballet for Diversity 101. Forty-six per cent is many things — a plurality, a “highest number of” — but it ain’t a majority. Someone in the office explain. Meanwhile, we look forward to Oriel’s column in 2016. Fortnightly, right? So that’s how many columns, Jennifer? Thirty-seven? Six? 2129? You say. — Guy Rundle

What, no sequel? Last Friday, the UK Director of Public Prosecutions ruled out prosecuting News Corp over the News of the World phone-hacking scandal. That decision ended Operation Weeting, which was the police investigation into the scandal. But the UK government seems to have failed to announce a far more important decision: the second part of the Leveson Inquiry.

According to reports in The Times, owned by News Corp, the UK Conservative government of Prime Minister David Cameron has quietly shelved the second part Leveson inquiry, which was supposed to examine specific claims about phone hacking at the News of the World and what went wrong in the original police investigation (which was called off, allowing the hacking to continue). The first part of the inquiry examined the culture, practices and ethics of the British press and published a 2000-page report in November 2012.

For many in the UK (and the hacking victims) the second part of the inquiry was the most important, because it would have probed police and senior News Corp executives and editors, including James Murdoch and his father — not to mention the now resurrected Rebekah Brooks (News’ recently returned UK boss).

The Times report came a day after The Guardian reported that Rupert Murdoch and senior News Corp executives “met government ministers 10 times in the year to the end of March 2015, more than any other newspaper group, research has found. Murdoch personally attended eight of those meetings, three of which were with chancellor George Osborne, three with then culture secretary Sajid Javid and two with then education secretary Michael Gove …” — Glenn Dyer

Front page of the day. A long time ago in a galaxy far, far away … 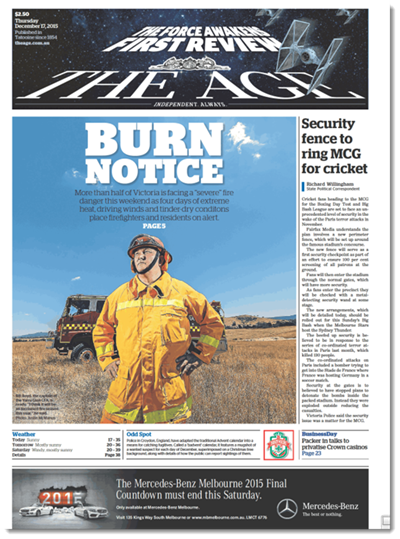 Regarding the front page of The Age, I was travelling in Melbourne on Thursday and as I walked past one of those charming Melbourne CB news stands the word “Transparent” on the front page of The Age caught my eye. My interest piqued, I turned back to purchase a copy, only to discover that the entire front page of this previously respectable newspaper had been turned over to an entertainment join venture between its owner and some other party. No longer interested, I changed my mind and walked on.