Eric Abetz’s sad, sad year. It’s been an eventful year in politics, no one would deny that. But the Australian Christian Lobby’s Lyle Shelton has described it as “traumatic” for politicians like Eric Abetz, who was booted from cabinet after the leadership spill that left Abetz and other conservatives on the outer. “You’ve been through a traumatic time, as has the nation, politically,” Shelton opened the ACL’s Political Spot podcast, before launching into an interview that was not so much a sponge bath, but a pampering session at a day spa. Abetz went on to have a go at the Canberra press gallery and the media generally, saying “media bias is very corrosive for the political framework within our country. One would hope that reporters actually report instead of commentate and insert those subtle and sometimes none-too-subtle descriptors to try and denigrate — or indeed uplift those that they support and denigrate those that they oppose.”

He repeated his comment to the Oz‘s Sharri Markson that it was a shame that the media didn’t report more on the “godless left”, and railed against the “ingrained, endemic bias that the Australian people have to deal with”. Shelton went on to say that Abetz had called out the bias without “in any way playing the victim” and called his stance against marriage equality “courageous”.

Abetz didn’t sound at all bitter about losing his gig as leader of the Senate, even finding a silver lining:

“The fact that no role was found for me by [Malcolm Turnbull] is a matter for him to justify and not for me to be concerned about, and I seek to continue to be of service in my new role and now with the freedom of the backbench I have the freedom to speak out on these issues.”

Abetz also said that when it came to marriage equality, his views were formed by not only thinking about the current generation, but people eight generations into the future. And yes, it is too much to hope that Shelton asked if he also applied that logic to his views on policies to fight climate change.

The budget has been shot — round up the usual suspects. You can never accuse the Australian Industry Group of not being consistent. No matter what the problem is, AIG’s solution is invariably cutting wages and reducing employment conditions. In its response to MYEFO yesterday, the AIG didn’t focus on pesky things like whether we need more revenue, or need to cut spending, or both. Instead, the response from chief executive Innes Willox literally begins “Today’s MYEFO and the sobering budget revisions again highlight the importance of progressing the key policy areas currently on the agenda: lifting the flexibility of our workplace relations arrangements …” Not even the Business Council, the other outfit that has “more flexible industrial relations laws” hard-wired into its keyboards, tried to blame workers for the deficit blow-out. They settled for warning that raising taxes was not the answer to a collapse in tax revenue. Clearly they share Treasurer Scott Morrison’s view that there’s no revenue problem.

The blurst of times. Voting has begun in earnest for the 2016 Crikeys, and Ms Tips understands that the races for both Person of the Year and Arsehat of the Year are very close. As we told you on Monday, despite many nominations, Tony Abbott is ineligible for Arsehat of the Year this year, as we have awarded him a Lifetime Achievement Award in Arsehattery. There’s no shortage of pollies on the list of arsehats though, with Peter Dutton on the list for specialising in immigration arsehattiness. Auburn deputy mayor Salim Mehajer is a nominee for his obnoxiously large wedding (among other things), as is Mark Latham, for using his columns and Twitter to air strange personal grievances. The list of arsehats is not without female representation, with Miranda Devine, Bronwyn Bishop and Peta Credlin rounding out the nominees.

The nominees for Person of the Year actually make for uplifting reading. Adam Goodes is there, for standing up to racists and proudly displaying his Aboriginal heritage. Rosie Batty is nominated for her tireless work to bring domestic violence to the front of the national agenda, and Gillian Triggs is on the list for fighting the government that employs her when it comes to human rights. Voting is open until midday on Friday, you can cast your vote here. 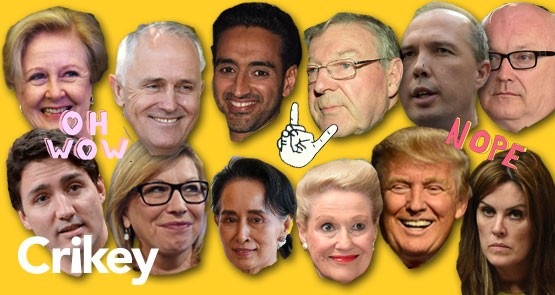 Abbott v the Greens. This tale comes from a tipster who tells us that former PM Tony Abbott walked into enemy territory recently, when all he wanted was a beer:

“Tony Abbott walked into a pub recently, ordered a beer only to turn around and see a group of Greens t-shirts. He didn’t move for a couple of hours. It was like a Mexican standoff with Tony not wanting to be beaten. As a sign of good will and concern for his hydration levels, someone ordered him a shandy. Oh and the Green shirts won the standoff.”

It sounds almost too good to be true. If you were one of the Greens buying Abbott a shandy, let us know here.

They do things differently there. The Victorian branch of the Liberal Party is advertising its Christmas fundraising raffle on social media at the moment, with prizes like a Bertocchi ham, wine and Swisse “wellness products”, but that seems like small fry compared to what the Young Republicans of New York State offer to their members. According to an article on Jezebel, where two writers attended a holiday party “undercover”, the prize for the raffle on the night was the choice of three guns — a pistol, a rifle or a shotgun — or just $500 cash. No meat trays here, just the chance to go out and shoot your own. 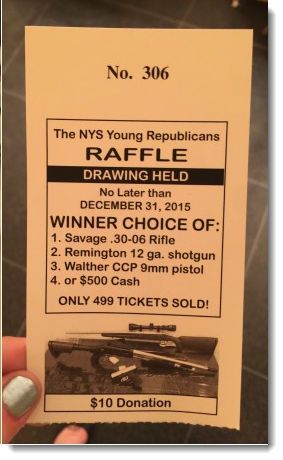 Not what was intended. A tipster has pointed out to us that Jamie Briggs, famous for his dance moves, or crash tackles, depending on which story you believe, has an unfortunate combination of cover photo and profile picture on Twitter, which make it look like he’s about to be bathed in wine. Which sounds like it would be great, actually.

Abetz – “Media bias is pretty bloody awesome when it’s with you!”

A sign of the times – the races for both Person of the Year and Arsehat of the Year are very close – or poor syntax?

The Hon Justice Peter McClellan AM. is the Australian of the year… by a country mile..