O Christmas tree, O Christmas tree. By now most workplaces have erected a sad-looking Christmas tree, with a few mismatched baubles, under which Kris Kringle gifts will be regifted to ungrateful colleagues. Ms Tips hears that the Christmas tree in the newsroom at the ABC in Melbourne is particularly festive, though, in a secular, politically correct, inner-city latte-sipping way. Adorning the top of the tree is not a star or an angel heralding the birth of baby Jesus, but a picture of News Corp columnist Andrew Bolt. While Ms Tips doesn’t find Bolt’s face inspires Christmas cheer, we’re sure it’s a nice gesture. Our big question now is, if Andrew Bolt is the angel in the Aunty version of the nativity, who is the boy child Jesus Christ? Tony Abbott? Rupert Murdoch? Who will lead the people to salvation? Inspired by our friends over the river, the Crikey Christmas tree now features Prime Minister Malcolm Turnbull: 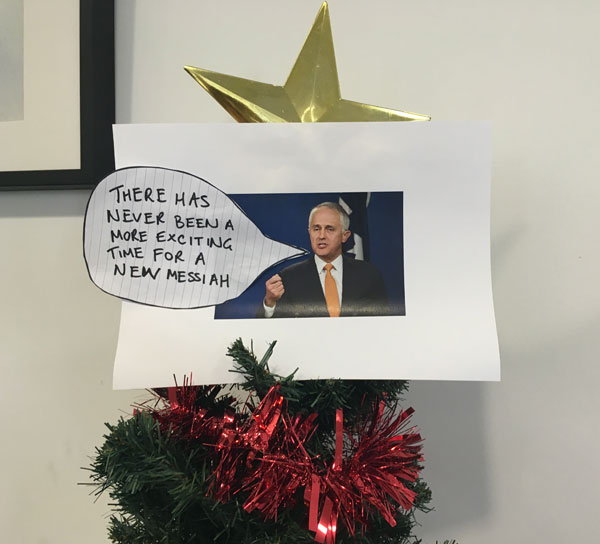 She’s a lady, whoa, whoa, whoa. Speaking of Malcolm Turnbull, he is just one of the nominees for this year’s Crikeys. While Turnbull has dominated the field of sexiest male pollies for a few years (barring last year’s upset by Scott Ludlam), the women’s field is a much more tightly run race. When it comes to the list of sexiest women in Parliament, the nominees cross all age groups and parties, as well as independent Cathy McGowan. Tanya Plibersexy has taken out the award for the last two years, but will this single eyebrow raise from her colleague Penny Wong put the title in doubt? This year the list also features Health Minister Sussan Ley, who has put in a strong entry after this cover photo of the Weekend Australian magazine. You can vote now on the sexiest female and male pollies of the year, as well as Crikey’s Person and Areshat of the Year, here.

Dangerous times. In our new agile and disruptive society, we hear that reporters at the national broadcaster are being asked to make their news reports more interesting by doing their pieces to camera while walking. Apparently the news will seem more exciting if instead of being told the facts by a stationary reporter, the journo is moving for no real reason. It sounds like the same logic that results in commercial news reporters shivering on dark streets doing live crosses to the 6pm bulletin, even though the action wrapped up hours before. We hope that the ABC has proper health insurance for their now agile and innovative reporters — a search for “reporter walks into” returns thousands of results on YouTube.

What’s his secret? Republican presidential candidate Donald Trump has released a medical statement to prove that he is physically fit (whether he is otherwise fit is another story altogether) to run the United States. The letter, from Dr Harold N Bornstein, is addressed “To Whom My Concern”, says that Bornstein has been Trump’s doctor since 1980, and that he was previously treated by Dr Jacob Bornstein Senior. Trump’s test results were “astonishingly excellent,” the letter states as it goes on to list Trump’s blood pressure and his recent weight loss. It then goes on, in a way that only Donald Trump’s doctor could, to say:

“If elected, Mr Trump, I can state unequivocally, will be the healthiest individual ever elected to the presidency.”

The letter doesn’t mention anything about the health of Trump’s hair. 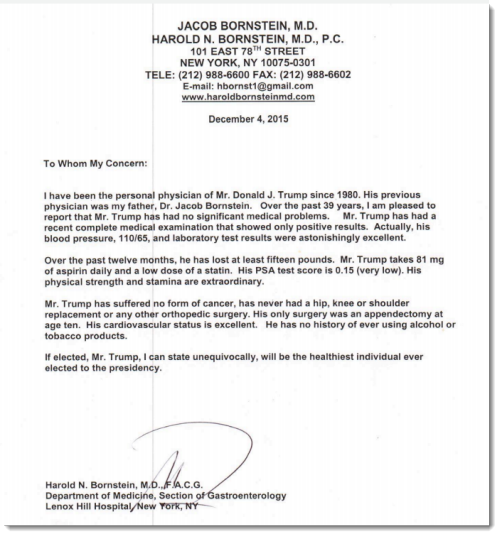 Coal not all bad at Christmas. A tipster in Brisbane tells us that coal might have been a topic of discussion at Annastacia Palaszczuk’s Christmas drinks last night — but they probably weren’t talking about giving it to naughty children:

“Adani Australia Chief Executive Jeyakumar Janakaraj spotted mingling with and lobbying Queensland government MPs and officials at the Qld Premier’s drinks last night in Brisbane. The proposed Carmichael coal mine is further under scrutiny post the Paris COP21 agreements. JJ (as he is known) had a lengthy discussion with Mines Minister Anthony Lynham … presumably about the weather and cricket!”

A pointed farewell. It’s been a bumpy year at the Art Gallery of New South Wales (as covered by Crikey) and last night was the farewell for Judith White, outgoing executive director of the NSW Art Gallery Society. In her farewell speech, White told her audience that the society, a membership organisation with 30,000 members, “finds itself largely misunderstood and undervalued” in the upper echelons of the management of the Art Gallery of NSW.

“Yet the society has levels of membership activity and loyalty that are the envy of other institutions, as visiting lecturers from interstate and overseas keep telling us,” she said.

White is leaving this month after her second stint as the society’s executive director, and her successor will be announced in the new year.

“The society’s relative independence is unusual these days, but it’s needed more than ever.”

“Our cultural institutions face a tidal wave of corporatisation and commercialisation that threatens the very purpose for which they were founded.”

“The society’s management team and I have been doing everything we can to maintain the society’s independence and our network of relationships that sustain the gallery.”

“The future will be up to the society’s council, my successor and our members to keep the society independent for many years to come.”

We stuffed up. Or did we? Ms Tips often makes fun of Fairfax for telling us the world is fukt, The Australian‘s inability to correctly name the Greens leader, and The Guardian‘s repeated confusion of Malcolm Turnbull and Malcolm Fraser. This means that when Crikey makes a boo boo, Ms Tips cannot let it slide. Yes, we did yesterday caption a photo of Foreign Minister Julie Bishop as “An Indian daily wage labourer carries coal at a local depot”. Strewth mused this morning: “Maybe it’s a metaphor that has to be stared at for ages like a Magic Eye puzzle before its meaning becomes clear”. Yes, that’s exactly what it is, completely on purpose.

I personally disagree with Donald Trump’s doctor. I think George W Bush would have been the most physically fit person ever elected as President of the United States. Regular exercise, including golf and running, a resting heart rate most people would dream of, plenty of rest and relaxation.

If elected, Donald Trump wouldn’t go close. On the other hand, we all known what a success George W Bush was.

If the Donald is such a blood-spitting colour with BP of 110/65 (a reading a teenaged peak athlete might have at rest) then there is something else seriously wrong. Apart from between his ears.
As to yesterday’s caption beneath Lady Macbeth’s pic, I assumed that it was meant as biting satire.