As expected, the mid-year economic update shows another revenue writedown, a larger deficit and poorer growth - but it's not all bad.

In what has now become a well-established ritual under both sides of politics, the end-of-year fiscal and economic update has revealed a slump in revenue and a revision to overly optimistic budget forecasts that have blown out the deficit and delayed the return to surplus. The Mid Year Economic and Fiscal Outlook for 2015-16, released earlier today in Perth, shows the government’s fiscal position continues to deteriorate. The 2015-16 deficit is now expected to be $37.4 billion, up $2.3 billion from May, and the return to surplus has been pushed back to 2020-21. The total of combined forecast deficits in coming years is now $108.3 billion, up from $82.2 billion in the budget.

That means that our overall fiscal position has barely improved since Joe Hockey loaded up the 2013-14 MYEFO with spending in an effort to blame Labor for hiding the true state of the budget — and has deteriorated significantly since the 2014-15 budget. 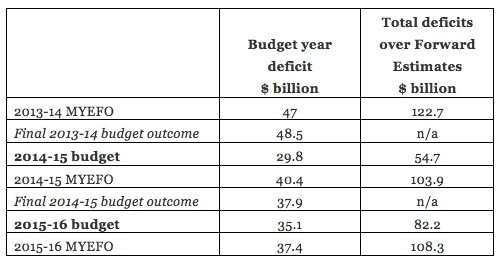 The deficit blowout is driven by a further fall in tax receipts that leaves the budget nearly $31 billion poorer over four years; from the 2014 budget to now, forecasts for this year’s tax receipts have deteriorated by $17 billion.

As long foreshadowed, Treasury downgraded its GDP forecasts from May of 2.75% growth this year to a more plausible 2.5%, while 2016-17 is also down a half of a per cent to 2.75%. Projections for the last two years of forward estimates are down from a wildly optimistic 3.5% to just 3%. Unemployment, however, has also been revised down: the budget forecast unemployment to peak at 6.5% this year and stay above 6% into 2016; now it is expected to remain at 6% this year and next. Participation has also been revised up slightly to 65%, reflecting an unexpected improvement in the number of people looking for work this year.

Inflation is expected to remain subdued, with May’s forecasts revised downward to just 2% and 2.25% this year and next, although Treasury has left wage price index forecast at 2.5% this year (and actually lifted its forecast for 2016-17). Nominal GDP, too, has been revised downward from 3.25% to 2.75%, which will put revenue under further pressure.

The Commonwealth will take 23.9% of GDP in revenue, slightly less than forecast in May but still 0.4 points higher than 2014-15 last year and the highest level since Peter Costello’s last budget, while spending will remain at 25.9% of GDP, as forecast in the budget, reflecting that Morrison and Mathias Cormann have managed to reduce spending from the Abbott-Hockey excesses that caused it to reach 26.2%.

The spending cuts in the statement are small in scale and will be targeted at welfare recipients and health, with new integrity measures forecast to earn $704 million over three years from next financial year. There’ll also be a total of over $1 billion cuts in health programs in areas such as GP incentives and workforce programs.

The key economic forecasts at a glance:

Meanwhile economic and fiscal vandal Joe Hockey is leaning on the taxpayers with his reward for incompetence in the US.

I’d love to see some ‘cost-benefit’ analysis on ‘integrity measures’. How much is spent on them and how much does it yield in genuine abuse of the system?

Is it possible that treasury is under pressure to be optimistic with forecasting? In a former private co I worked for (in finance) there was definitely pressure to be free with the optimism in order to delay bad news for as long as possible.

Surely the past performance of all their forecasts are sufficient to disregard them in future?
Astrology exists to make economists look reliable except they still fail, miserably.

Oh for the good old days when ‘Treasury was politicised’ (economic forecasts and such) – under Labor of course – according to Hockey and Abbott?