Tony Abbott sends a letter (which the Oz buries). And other media tidbits of the day.

The meaning of “engagement”. There was a time when every pronouncement Tony Abbott made was splashed on the front pages of Australia’s newspapers. But his criticisms of the first of several books about him was made in an unusual place this morning — in the letters page of The Australian.

It wasn’t even the top letter. In a response to a review written by Ross Fitzgerald of Wayne Errington and Peter van Onselen’s Battleground: Why the Liberal Party Shirtfronted Tony Abbott, Abbott writes the book is “riddled with errors of fact”. But he takes special issue with one:

“On page 213, the authors state: ‘We would like to thank Tony Abbott for engaging with us. He helped shape our arguments in this book even if he may not like the conclusions we reached.’

“I did not ‘engage’ with the ­authors. They requested an interview and emailed questions. These were so obviously a stitch up that I declined to answer other than to deny some of their claims.”

Abbott also dismissed the book as “partisan advocacy rather than disinterested scholarship”.

So what exactly was Abbott’s input to the book? Crikey asked both van Onselen and Errington this morning but didn’t hear back by deadline. But on Twitter, van Onselen, a contributing editor at The Australian, Sky News host and University of Western Australia professor, has been explaining the issue to his critics.

“He answered email questions, but said it was background so I had to be vague,” PVO wrote when asked to outline his exact “engagement” with Abbott. “How’s it not engaging?”

“He just doesn’t like that we found his email answers telling enough to say he helped shape our thinking.”

Peter van Onselen used to work as an adviser for Abbott when he was industrial relations minister, but the two haven’t seen eye-to-eye for some time. Abbott refused to grace PVO’s show while he was PM, a fact the journalist has not been shy in complaining about. — Myriam Robin

Firstly, The Australian, with a bold pronouncement that Australian-born British TV exec Jay Hunt was the front-runner (despite the same piece also carrying her denial: “It’s a fantastic job but I love Channel 4 and don’t have any plans to move at present”). Then, Fairfax’s Matthew Knott took the decidedly safer route of pointing out who wasn’t going to get the gig — apparently Kim Williams is out. Today, the Financial Review’s Joe Aston reckons it’ll be Singapore Google exec Michelle Guthrie.

Making politicians look good. South Australia’s media is in uproar after Premier Jay Weatherill took a two-person taxpayer-funded video team to Paris with him, leaving local media to pay its own way to accompany him (none did). The footage was supplied to media outlets as well as used on the Premier’s Facebook page (leading the opposition to claim taxpayers were funding political campaigning). 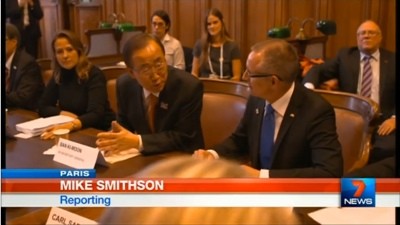 Veteran Seven news director Terry Plane told InDaily that he had no issues with carefully using the supplied footage, given his journalists would still have the power to shape the story around that footage.

“I see the conflict,” he added. “We would always prefer to have our reporter there asking the questions we wanted answered.”

But Weatherill said the “old media” was merely threatened by his use office’s production of high-quality video content, and said the footage was “promoting South Australia”.

“It’s already been used by a number of the news networks and the very same networks that were also running stories criticising us so I found that curious,” Weatherill told ABC 891, adding that it was “a bit of a threat to old media”.

“We’re publishing our own material, bypassing the old media — they don’t like that.”

Weatherill is far from the first political leader to turn to in-house production teams. In New South Wales, some of the most iconic images of Mike Baird have been taken by his in-house team and shared on his social media channels. At a federal level, Tony Abbott had his own photographer, as does Malcolm Turnbull. For politicians, the practice helps them control their image and limit the amount of media they have to take on trips with them. It’s controversial with journalists for much the same reasons. — Myriam Robin

Industrial-scale branded content. The New York Times’ content marketing team employs 50 people, and together, they make up about a fifth of the paper’s revenue. More in Monday Note.

Front page of the day. A year since that day at a Martin Place coffee shop … 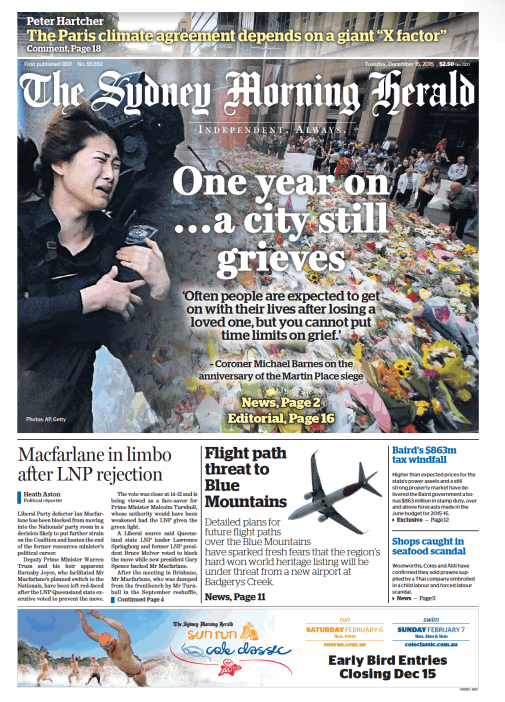 When Crikey runs a poorly disguised criticism of Tony Abbott’s reaction to what he did NOT do when the book was being written, and lets the authors hide unscathed by Crikey journalists [you do have some?] it says a great deal about this capitalist media enterprise, doesn’t it.
It must sadden you that you didn’t receive adequate twitter answers from the two authors, mustn’t it.

I read ‘Battleground’ and I thought it was very good. Not that it didn’t have any slight errors or exaggerations.

It was written for people who dislike Abbott, not to be ‘even-handed’ to appeal to the few Abbott-lovers by including the few good things Abbott did (I can’t think of any off the top of my head).

The Age had anything Abbott story this morning – about how he insisted that the previous Victorian Liberal government was handed $1.5 billion for the East-West tunnel, despite the project not being ready, so as to make the budget of the last year of the Labor government look worse.

I didn’t like Abbott ever since he opposed funding of embryonic stem cell research when he was health minister on the grounds that no one knows what the results would be and whether it would be of use.

That’s precisely why you do science. We wouldn’t be here were it not for the urge to discover the unknown. Captain Cook’s first voyage was primarily to observe the 1769 transit of Venus, so as to be able to calculate the size of the solar system, not to find a penal colony for when they lost their American colonies in 1783.

May we assume that all these writing & speaking fees are reported on Abbott’s pecuniary interest statements?
At least they’ll assist with the 2nd mortgage he loudly whined about having to take out after the 2007 election deprived him of a Minister’s salary.

Our overblown commemoration of the Sydney “siege” must look awfully shallow to countries we have decided to bomb..

I felt considerable Schadenfreude at the demise of Tony Abbott. I read ‘Battleground’. I wasn’t expecting a ‘fair’ book because there’s no way that the debacle of Abbott’s leadership can be made to look ‘good’. It was a disaster from the word go. Its result should have been realised from Abbott’s time as opposition leader.

I’ve always said that Malcolm Turnbull ought to be the leader. I was surprised that he only won 54/44 – his numbers man had estimated that his ‘pants down’ count was 52 (meaning that’s how many votes he’d get if he forgot to put his trousers on before the meeting).

If the bias of the book upsets you, then good – it adds to my Schadenfreude.