Voters end the year more optimistic than over the last two years, and the Coalition rounds off 2015 with a sound lead, Essential report shows.

The Turnbull government is ending the year strongly, with Australians more optimistic about 2016, but the performance of Treasurer Scott Morrison remains a big question mark for voters, today’s final Essential Report of the year shows.

The Coalition has moved up a point on its primary vote to 45%, while both Labor and the Greens are down a point to 35% and 10% respectively, for a two-party preferred Coalition lead of 52%-48%. 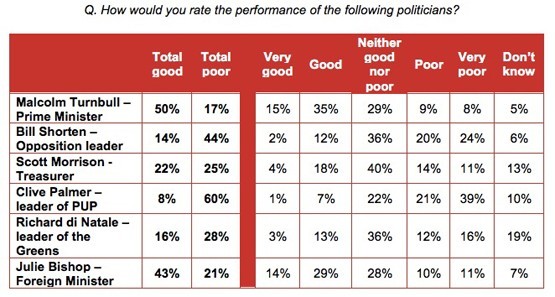 The figures between 2013 and 2014 vary depending on the category, but when it comes to things that affect them, voters definitely seem more positive than they were at the end of a catastrophic year for the Abbott government in 2014, which left political and economic sentiment in the gutter.

However, Malcolm Turnbull’s appointment of former treasurer Joe Hockey to the ambassadorship to Washington DC has left voters unenthused — 42% oppose it, including 21% who strongly oppose it, while 33% support it — mainly Coalition voters, who back it 57% to 23%.

Whether today’s Mid Year Economic and Fiscal Outlook changes those perceptions, or whether that gets swamped by Christmas and the summer break, won’t be clear until next year.

The Crikey Commissariat is indeed short on Santa’s lists when you have to take comfort from the fact that most voters aren’t happy about Joe’s appointment. Of course Australian Citizens are unhappy about Politicians always on the lookout for new and bigger troughs into which they can stick their snouts; but the present you didn’t wish to receive was the news that in light of the low views we have about Politicians, Joe’s appointment received reasonable acceptance.

I imagine Greens voters’ relative dislike for Xmas correlates to their more independent-minded stance on mainstream matters; ie what they dislike is the commercialised nature of the event and the pressure to take part in a strictly prescribed manner. Sounds like a praiseworthy attitude to me.