Chainsaw gets chopped down, but more climate quarrels beckon

The failed defection of Ian Macfarlane is a win for Malcolm Turnbull but will exacerbate what will be a difficult relationship with the Nationals over climate policy.

On the basis that politicians needed reminding yet again that treachery rarely turns out well for anyone, yesterday the political gods, or at least the Liberal National Party executive, lowered the Checkpoint Charlie boom on Ian Macfarlane’s defection to the Nationals. Macfarlane was sent trudging back in the direction whence he came. Or, more accurately, into political oblivion.

The decision was also bad for the Nationals, who thought they’d orchestrated quite the coup to lure Macfarlane into their ranks and score another cabinet spot, and not even that great for Malcolm Turnbull. The Prime Minister has successfully asserted his authority but saw the Queenslanders split 14-12 on a decision that would clearly have undermined him and infuriated Liberal MPs. Moreover, Turnbull is now left with a Deputy Prime Minister who keeps secrets from him. The only real winners are Nationals juniors like Darren Chester, who won’t be stuck in the queue for a frontbench spot longer than necessary.

Macfarlane is no stranger to humiliation. With that frighten-the-kids voice and his extensive background in agripolitics, “Chainsaw” seems to cut an intimidating figure, but in 2010 he humiliated himself when he and Andrew Robb hatched a plot to remove Julie Bishop from the Liberal deputy position, as part of Robb’s campaign to secure the shadow treasurership (in retrospect given Joe Hockey’s performance, maybe not a bad idea). As Peter Hartcher revealed at the time, Macfarlane confronted Bishop to tell her “we’ve got the numbers”. Except he didn’t have the numbers, and by the end of the meeting, he didn’t even have Robb, who’d dropped his campaign to knock off Bishop.

It’s one thing to fail to knock off a deputy leader, but quite another to botch your own defection — both in terms of public humiliation and in terms of Coalition stability. Macfarlane’s move elicited plenty of criticism from senior Queensland colleagues like George Brandis and Peter Dutton, and he even got a send-off from junior minister Jamie Briggs. But he’s also inflicted an own goal on a government where management of internal divisions may be the biggest threat to Turnbull’s chances of winning power in his own right next year.

While the Nats are less interested in destabilising Turnbull — who has significantly improved their electoral prospects — than Tony Abbott and his kitchen-cabinet-in-exile, the boys (and occasional girl) from the bush share many an issue with Abbott’s little band, most especially climate denialism. And the Nats will become even more denialist when Barnaby Joyce, an out-and-out conspiracy theorist, replaces Warren Truss as leader at some point in the coming months.

The Paris agreement has already brought the denialists out in Liberal ranks, with Dennis Jensen — who’d be all for climate action if the only answer were nuclear power — Sydney backbencher Craig Kelly, WA Senator Chris “somebody poisoned the waterhole” Back and foetid ungulate George Christensen all offering their insights on the deal. Jensen who, unlike the others, occasionally shows evidence of having a functioning brain, also spotted the direction alleged environment minister Greg Hunt was going in when he flagged in the wake of Paris that he “probably will take on board international units” for his Direct Action plan.

The purchase of international emissions reduction credits to help meet Australia’s emissions reduction goals was outright banned under Tony Abbott, who regarded international permits as akin to Monopoly money. But as it stands, Direct Action won’t meet our current emissions reduction targets, let alone the underwhelming targets we took to Paris, and definitely not the more ambitious targets that the government is now under pressure, post-Paris, to upgrade to. That’s why the Australian Industry Group, which nailed the problem of Direct Action when it calculated meeting our targets with it would cost up to a quarter of a trillion dollars, says international permits are “critical“.

As Jensen noted, joining an international trading scheme would be a significant shift for the Coalition, and one unlikely to be enthusiastically endorsed by denialists. And that’s before the issue of more ambitious targets is dealt with.

Aside from the budget, this is the biggest policy challenge for Malcolm Turnbull: he knows better than anyone that Direct Action needs to be “supplemented” by a real climate action policy, but both the Nationals and the hard right within his own ranks are opposed, and Abbott is ready to exploit any tensions. Turnbull is unlikely to adopt the crash-through approach of 2009, and probably won’t move on the targets issue until after an election has delivered him power in his own right and greater authority within the joint party room.

That, however, will undermine any election campaign against Labor on climate: the opposition has already committed to the more ambitious targets that the Paris agreement suggests Australia needs to embrace, and sees international permits as a key part of achieving them.

The extra irony of all this is Macfarlane was Turnbull’s hand-picked negotiator with the Rudd government over Labor’s Carbon Pollution Reduction Scheme in 2009. Even if Chainsaw disappears from Parliament before February, the fallout from his failed defection will continue to bedevil Turnbull’s climate action plans throughout 2016. 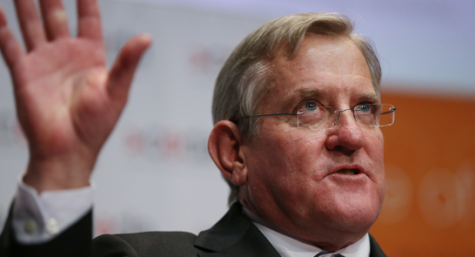 Set upon by Brandis and Dutton – now there are a couple of lead lights?

What on earth is wrong with the Great Big Tax on everything: simply charging the big polluters for overstepping their quotas? No trading. No fudging. It would also bring in revenue.

Wasn’t there a film called ‘Chainsaw Massacre?” Or am I confusing MacFarlane with moviedom?

After such a gross display of disloyalty, surely McFarlane must be dis-endorsed, or at least dropped from pre-selection by the Liberal Party.