Vote for Arsehat! (no, you can't vote for Tony) ... Photoshopping Miranda Kerr's breasts ...

And the nominees are … This year we had a prince become a knight, a speaker undone by a chopper, and a Prime Minister bestowed with the addendum “ILF” and called “Daddy” by the youth. The end of the year signals a time to reflect on the year that was and vote on the sexiest pollies, the Person of the Year and the Crikey Arsehat of the Year. This year we have included many suggestions from our readers, who helped with both surprising and completely expected nominations.

We believe that new Prime Minister Malcolm Turnbull is in an ideal position to take back the crown as sexiest male politician, after losing out to Scott Ludlam last year. Ludlam has had a quiet year, but Turnbull has risen to the top job in the country, allowing many voters to issue a sigh of relief. And let’s face it, power is kind of hot. 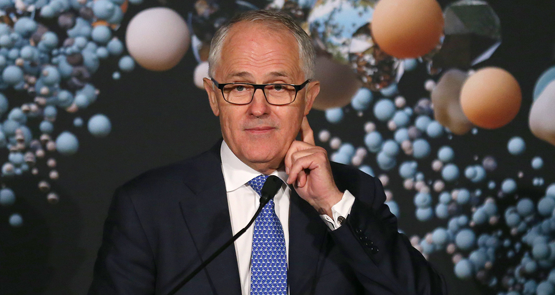 Andrew Hastie, the MP whose byelection fell just after the spill, is a fresh addition to the list, with one reader giving this reason for his nomination:

“It’s like a committee of gay men were asked to design a parody of a straight man — muscled, wavy hair, nice eyes, dimpled smile, family man, army uniform, son of a preacher man. Is it wrong that the Christian fundie thing just makes him even hotter to me? Give Hastie your votes this year before he morphs into an unlikeable Andrew Nikolic-type.”

Hastie isn’t the only new entrant from the Coalition; the George Clooney of Gippsland Darren Chester is also on the list of nominees. Readers who make a habit of following good-looking politicians will notice a marked absence from this year’s list. Despite concerted campaigning within the Crikey bunker, Canada’s Prime Minister for Muscles Justin Trudeau is ineligible for the vote, as it only includes Australian federal politicians. Trudeau is, however, nominated for Crikey‘s Person of The Year, after naming a 50% female cabinet, and personally welcoming Syrian refugees to Canada (he has pledged to take 25,000 from the war-torn nation by February). 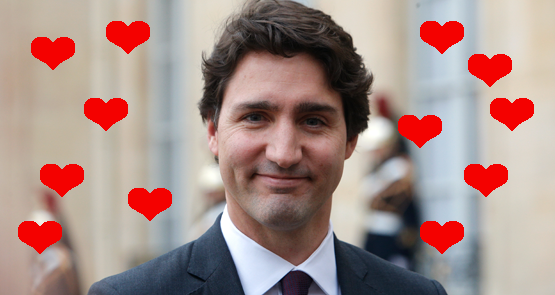 Now to the nominees for Crikey‘s Arsehat of The Year, where nominations from our readers led overwhelmingly in one direction — Tony Abbott. This year the former PM named Prince Philip as a knight, ate a raw onion (twice!) and after promising that he wouldn’t be sniping or undermining Malcolm Turnbull’s government, moved on to do exactly that. To avoid a landslide victory, Crikey has awarded Tony Abbott a lifetime award for Arsehattery, recognising that his long career of gaffes and stupidity could not be narrowed down to one arbitrary 12-month period. Instead we offer you arsehats who have applied their skills in many areas. Peter Dutton, George Brandis and David Leyonhjelm are just a few politicians, while Miranda Devine and Mark Latham also feature on the list. And Donald Trump spat the dummy when he was not named Time‘s Person of the Year, but you can give him an honour just as great — Crikey Arsehat. It’s been a big year — get your votes in here before Friday.

Bizarre rules at Bazaar. The latest edition of Harper’s Bazaar hit the stands a few weeks ago, but Ms Tips hears that the high-profile nude cover of model Miranda Kerr hasn’t been quite so simple for Bauer Media, publisher of the magazine. Kerr admits in the magazine that she was wearing a tiny G-string, which was photoshopped away, to give the impression that Kerr was wearing nothing but expensive jewellery and shoes (at this point Ms Tips almost wishes to channel Rupert Murdoch and ask why a fashion magazine would do a cover image with no clothes). Ms Tips understands there were also strict stipulations when it came to photoshopping other parts of the photo, such as just how much bigger her breasts were made to appear. A tipster told us that Woolworths supermarkets had found the magazine too racy to stock, pulling it from the shelves, but Woolies have kiboshed that rumour, saying it’s business as usual with Harper’s. It wouldn’t have been the first time racy magazines had been pulled from supermarket shelves — Coles gave Zoo Weekly the flick earlier this year, after a petition against the men’s magazine. We asked Woolies if they were stocking the current edition of Harper’s Bazaar, but were told that it was stocked as it normally is.

New favourite at leaderless Courier-Mail. The music has stopped for the moment at News Corporation, but there’s still a chair empty. With Chris Mitchell departing with much misty-eyed fanfare as spiritual leader of The Australian, Paul Whittaker taking over this week, and Chris Dore stepping into the vacant Daily Telegraph leadership, inquiring minds want to know who’ll replace Dore at The Courier-Mail. Especially in the Bowen Hills newsroom, which is wondering why the carefully arranged reshuffle didn’t, apparently, include filling their post. In fact, all staff know about the decision is what they read in Saturday’s paper: that an “announcement of a new editor … will be made in coming weeks”.

We told you Tele deputy editor Ben English was the hot tip — he’s still in the running, apparently — but speculation up north has shifted to a local, stablemate Sunday Mail editor Peter Gleeson. What hacks don’t want is to take the foot off the pedal: Dore was seen as an aggressive leader who campaigned hard on the front page (witness the screaming Gerard Baden-Clay front pages last week) and actually managed to grow print sales in the last survey. Unlike Gleeson’s Sunday Mail …

In other news from The Courier-Mail camp, Kylie Lang has been taken off Saturday insert QWeekend after three years in the chair. She’s moving to a role as “columnist and brand ambassador” on the paper, she announced on Twitter over the weekend, with assistant night editor Baz McAlister taking over on the weekly glossy.

Meeting up a stink. It’s a stressful time of year in retail land, as big bosses look at daily sales hoping that high December sales will cushion their slow sales throughout other months. Ms Tips hears that the CEO of one women’s fashion chain was feeling the strain so much that he held a teleconference meeting with store managers while sitting on the toilet. According to our source, it wasn’t a Col Allen-style time-saving measure, but it had a bigger meaning — that if sales didn’t improve, they’d all end up in said toilet. The move didn’t quite hit the spot with the many female managers who staff the stores, who found it an immature move. So who could it be? If you know more, drop us a line.

Isn’t Hastie already the turd on the floor that everyone steps around?

Way past time to stop presenting women as exclusively sex objects. In addition, a famous couturier once noted that it is not what is revealed which tantalises but what is not.

Once again Crikey keeps alive the style of the late Dorothy Dix, and pretends it’s involved in serious journalism.

What’s the point in Crikey subscribers voting for person of the year? You have already made up your minds that it will be our useless ‘leader’ Talcum Malcum.
I am a lone voice who thinks he should be Arsehat of the Year…after all, he knifed a sitting PM and hasn’t done a damn thing for the country since then.
All hot air and no substance…he will continue to be kept in check by half his own party, and all the Nats!
He needs to go!!

You aren’t alone, CML. But knifing a PM is common political practice. You can’t really take one out any other way. would you prefer he hadn’t, and Abbott was still PM? surprising number of people, even Crikey readers, agree with the rest