Is Caleb Bond the new Bolt? And other media tidbits of the day.

Adelaide Uni posed to sell Radio Adelaide. It appears increasingly likely that Radio Adelaide, Australia’s oldest community radio station, will be sold, with current owner the University of Adelaide unwilling to financially subsidise it for much longer.

As Crikey has previously reported, the university is currently conducting a public inquiry into what to do with the station, after arguing the status quo is unsustainable for the university.

In an email sent to University of Adelaide staff this morning, vice-chancellor Warren Bebbington said “several organisations well positioned to operate a community radio station have stepped forward with proposals to take over Radio Adelaide”.

“We are now in negotiations with these parties, and over the next 10 days we also welcome registrations of interest from other organisations with the capacity to take a significant financial interest in the station.”

The festival of Mitchell continues. In case you haven’t read all you want to about The Australian‘s departed editor-in-chief, here are former Oz journo Simon Canning’s reflections on his former boss, as well as on how he expects Paul Whittaker will go down:

“Philosophically, nothing will change, and that is the point.

“But from the perspective of the newsroom, life under Boris will be very different.

“Known for rolling up his sleeves and getting stuck in, there will be none of the subtlety of Mitchell’s reign and he will be a common sight on the newsroom floor. His tabloid instincts — far stronger than Mitchell’s — will need to be kept in check.”

So much for transparency. The Las Vegas Review-Journal — Nevada’s largest media outlet — has been purchased for $140 million. The problem is, no one knows exactly who its new owner is, as the transaction was made through a holding company set up for the purpose and attempts to uncover more have so far turned up nothing.

“I don’t know who I’m working for,” tweeted the capital bureau reporter Sean Whaley. And he’s not the only one who’s upset. From the Huffington Post:

“The new owner’s decision has put Review-Journal staffers in a tough spot. They could inadvertently create conflicts of interests by reporting on the undisclosed backers of their businesses. And Review-Journal reporters seeking more openness from government and the business community will have to contend with questions about lack of transparency in their own shop.”

Bolt’s replacment. While Andrew Bolt is away filming a series on reconciliation for the ABC, 16-year-old South Australian Caleb Bond has been hired as a replacement. Bond, probably Australia’s youngest right-wing culture warrior, has already been published across various News Corp titles. Over summer he’ll write a weekly column on Thursdays for the Daily Telegraph.

Correction: An earlier version of this item said Caleb Bond was a student. He isn’t.

Not so fast, Rupert … Just as the Murdoch clan was breathing a big sigh of relief at the decision of the UK Director of Public Prosecutions to drop all legal action against News Corp over the News of The World phone-hacking scandal, a report by Reuters will strike terror into the clan’s inner circles (if it hasn’t already). The report claims US investigators are probing links between a key media rights marketing company close to FIFA and 21st Century Fox, the most important company in the empire. — Glenn Dyer

APN: slip sliding away. Buried in last week’s market swings and roundabouts was a very curious slide in the price of shares in the regional newspaper, outdoor advertising and trans-Tasman radio group APN News and Media. For some unexplained reason or reasons the shares lost 14.7% of their value last week with Friday’s fall a small 1.1%. Normally you would have expected the ASX to lob a “please explain”; especially as APN is about to rule off its 2015 financial year at the end of the month and report in February. The fall is rather close to the end of the year and management and the board would have a good idea how the company performed for the year. The fall last week raises the question, is a negative trading update in the air?

Last week’s fall continued a slide that started on December 3 when the shares peaked at 52.50 cents. The fall to last Friday has been more than 17%, with the slide concentrated in the five trading days last week. By the opening last Monday, APN shares had recovered the small loss of the week before and peaked at 51.50 cents at 10.13am, just after trading opened. The shares then fell consistently over the week before reaching the week’s low of 43 cents on Friday afternoon, just before the close. Last week’s slide extended the year’s fall from around 33% to nearly 48%. But if you go back to the year high of $1.04 in March, the loss is more than 57%. All without a query or explanation. Last week especially was a costly time for shareholders — around $66 million, or more than $13 million a day. — Glenn Dyer 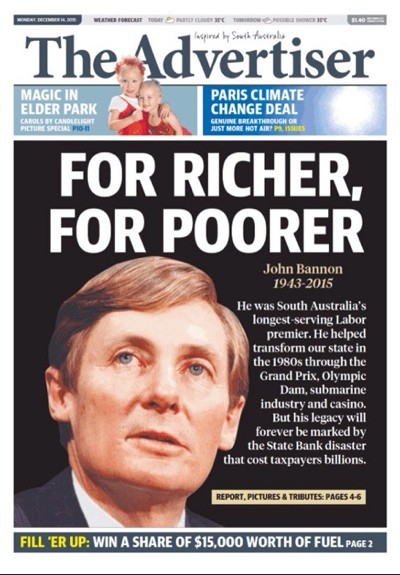 Front page of the day: Trust Ltd News to include the last sentence…how disgusting when the man has just died.
John Bannon was a rarity in politics…a good man. It is very questionable whether he was solely responsible for what happened at the State Bank of SA, but he took all the blame anyway.
How many politicians do you know who have done anything like that? He will be missed.

It’s not often you get to use the words pompous and lickspittle in the one sentence..thanks Chris..