The Tasmanian senator visited Townsville just ahead of the Queensland election and charged her trip to the taxpayer.

Independent Senator for Tasmania Jacqui Lambie has charged taxpayers more than $4000 for a trip to Townsville, during which she campaigned against the sitting Liberal-National Party government just days before the state election in January.

As she was telling Queensland voters to “put the LNP last” in the state election on January 31, the rogue Senator charged the taxpayers for her flights, car travel, and accommodation from Tasmania to Townsville between January 27 and January 28. 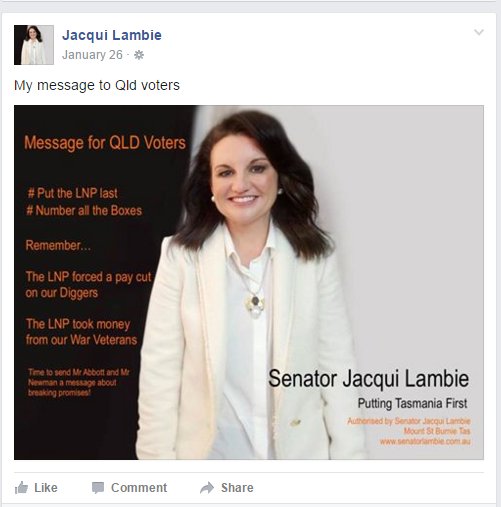 According to parliamentary entitlements for January to June this year, the charges include $562 claimed as electorate business for two nights away in Townsville just days out from the January 31 election that had Queensland premier Campbell Newman roundly defeated and the LNP ejected from office after just one term.

To get to Townsville from Tasmania, the Devonport to Melbourne, Melbourne to Brisbane, Brisbane to Townsville flights cost $2928.25 total, and car expenses for Lambie’s two-day stay added up to $883.27.

Travel entitlements permit MPs and senators to travel for parliamentary, electorate or official business, but not for election campaigns. While Lambie has said she was meeting with Defence personnel in Queensland to argue against the then-Abbott government’s opposition to pay rises for ADF personnel, her press releases and social media postings during her trip in Townsville make it clear she was also campaigning against the sitting Queensland government. In a YouTube video Lambie posted before her trip, Lambie noted it was unusual for a senator for Tasmania to be weighing in on the Queensland election, but called for voters to put state LNP candidates last because of the federal government’s actions around Defence pay and entitlements:

“If you want to kick Tony Abbott and his Liberal-National Party mates in the shins — or a little bit higher — over the way they’re treating our defence families, then make your vote count in the Queensland state election. On your ballot card put the LNP candidate last.”

Lambie posted a photo of a meeting with the Vietnam Veterans Association in Townsville to Facebook, but in another post Lambie asks Queensland voters to “send Mr Abbott and Mr Newman a message about breaking promises”. Lambie did not have any candidates in what she is now calling the Jacqui Lambie Network running in the state election, as she did not apply to register her own party until the end of March.

On her return, Lambie spent two days in Adelaide, with flights costing $1021.13, car costs, $78.60, and accommodation in Adelaide for two nights at $714, also for electorate business. There were no social media postings around the time indicating why Lambie had visited Adelaide.

Lambie’s chief of staff, Rob Messenger, said the travel was within guidelines.

“The senator visited Townsville on official business — dealing with life and death issues associated with the welfare of serving and ex-ADF members and their families. She continues to travel on the mainland doing the same. Senator Lambie and other cross bench senators in this parliament are in the unique position where their votes greatly influence a broad range of important national matters. In order to be fully informed she chooses to travel to all parts of Australian and meet people face to face.”

Messenger says the government hates how hard-working Lambie is, and accused Crikey of “political malice” and being part of a “Liberal campaign to stop [Lambie] from travelling Australia to do her job”.

“The Senator’s travel to Townsville is hardly a helicopter flight to a political party fund raiser. It’s 100% legitimate.”

Lambie is not the only pollie to claim expenses for travelling to an election. The Herald Sun reported last week that Melbourne Greens MP Adam Bandt and his wife charged taxpayers over $3000 for a trip to Sydney in February and March where he campaigned for the Greens in the New South Wales state election.

It would raise the tone of political discourse in this country if the media got over this outrage regarding politicians doing their jobs.

You make fundraising and campaigning look sleazy when it is not. You are pandering to the ignorant set that hasn’t worked out that if politicians are made to pay for this stuff themselves, parliament will be occupied by the rich and this is not a good outcome for Australia. Combining parliamentary work with fundraising or campaigning is a smart way to enable politicians to do their jobs and stop costs becoming unsustainable.

Fundraising and campaigning are part of a politician’s job description.

Get over it Crikey.

I bet Tony Abbott has been charging us more.

David, taxpayers provide extremely generous perks for parliamentarians, but the distinction between what it should and shouldn’t be used for is VERY clear, even for any mediocre intellects in their ranks, the more so since they have staff who could be chosen on capability rather than obsequious loyalty.
bushby jane, can’t you make a relevant comment now and again instead of venting your spleen on public figures you don’t love?

If campaigning on behalf of your political beliefs is not part of the job then buggered if i know what is.
What wasn’t was Abbottrocious using taxpayer money to promote his book.
Nor flying Barnyard Rduge and lady Macbeth back from a knees up in Bombay for a billionaire miner’s daughter’s wedding.