Media briefs: Mitchell on Mitchell … Wood on The Guardian … Martin on the ABC …

Chris Mitchell says he's not an angry guy, really. Plus other media tidbits of the day.

A creek of gold? On the evening of his departure from The Australian, Chris Mitchell gave an interview to the ABC’s Richard Aedy. In it, Aedy asked Mitchell why the paper had become so combative during his tenure. Mitchell said it was a sign of the times:

“I’m not an angry person. I think if you asked around the staff they’d say I’ve only raised my voice once in 13 and a half years. But we’ve been ‘elbows out’ — as one of my former editors Michael Stutchbury would say. It’s important in building the Oz brand …

“I think everybody’s campaigning, particularly in the print media, has sharpened up. You’ve had to do that to maintain an audience. It’s easy to imagine if you do the same thing as you have in the past the audience will come. [But] in a more crowded media marketplace, you have to be more relevant and more noticed.”

Mitchell thinks the Oz‘s strategy is working. He says the paper, which hasn’t been profitable since the GFC, could break even this financial year.

“Our revenue over the last two years has recovered quite dramatically … [it’s] up $32 million in revenue. Total revenue the for paper is $130 million. We can make a viable business out of that.

“Obviously my editorial costs are high. It’s an old-fashioned paper with a large staff. It’s not going to be hugely profitable. But I think we can be back to the black by the end of this financial year. These 80,000 people paying full-freight for digital [subscriptions] have helped us replace around half what we lost through classifieds.

“We’ve got a way to go, but we’re probably doing better at building that digital business than anyone else.”

While his contribution helped establish the news website in 2013, The Australian reported this week that Wood had since issued The Guardian with a directive to turn a profit within two years — or risk him withdrawing the investment.

The Australian claimed to have obtained documents revealing “a horror story of decline” since the site’s launch, including a loss of up to $14 million.

When the ABC asked him about it, Wood said: “No, that’s bullshit. Never.”

In a statement issued yesterday, The Guardian also denied the reports, calling them “misleading” and announcing that in reality it had enjoyed a revenue increase of “64 per cent last year”.

Centre for Advancing Journalism director Margaret Simons told the ABC she believed the outfit was not turning a profit.

“I doubt it’s making money yet, and my understanding is that they’ve got a five-year plan to build a sustainable business,” she said.

No timeline for the debt owed to Wood has been reported, and the businessman is said to have “no say” in the operations of the business.  — Sherryn Groch

Q&A gets the all-clear. The ABC has been cleared of all “left-wing bias”, according to a draft report of the highly anticipated review into its flagship program Q&A that was leaked to The Guardian yesterday.

Headed by broadcaster Ray Martin and SBS executive Shaun Brown, the report dismissed claims levelled by senior Liberal MPs that the ABC had an “anti-Coalition” agenda and found consistent balance in its reporting across both sides of politics.

The independent inquiry was instigated earlier in the year when Q&A came under fire for including former terrorism suspect and the first Australian to be charged under anti-terror laws Zaky Mallah in its live studio audience.

Following Mallah’s divisive comments on the program, then-prime minister Tony Abbott called for “heads to roll” at the ABC and demanded a review. Frontbenchers were also banned from appearing on the program in a blackout that has since been lifted.

But the response from the ABC was perhaps equally swift: Q&A host Tony Jones apologised on air for the incident and the broadcaster issued a hasty statement admitting “an error in judgement in allowing Mr Mallah to join the audience and ask a question”.

The review studied the past six months of programs aired on the ABC and concluded that, while the broadcaster had been a “challenge” to the Coalition this year, it was equally as hard on Labor during its 2012 term in government.

It also recommended that the ABC include “a greater diversity of perspectives” outside of the traditional two party camps to “avoid being too much of an attack on the government of the day, regardless of which particular party is in power”.

That meant more Greens and independents on its screen rather than more Liberals, the report said, though it added that the broadcaster could also benefit from including more conservatives from overseas alongside typically progressive international guests.

While it is unclear whether this review will answer the question posed to the ABC by Tony Abbott of “whose side are you on?”, it has reaffirmed the views of supporters of the program, who called the government’s condemnation of Q&A a “political beat-up”.

After the ABC logo was depicted as an Islamic Flag flag on the front pages of Murdoch newspapers, former Media Watch host Jonathan Holmes raised concerns that the ABC hadn’t been allowed to defend itself.

ABC managing director Mark Scott later fired back at Abbott in a speech declaring that he ran a “public broadcaster, not a state broadcaster”.

After the incident, Q&A executive producer Peter McEvoy was issued a formal warning but continues to work on the program.

Q&A has since been moved from the television division of the ABC to its news division at the request of the government. — Sherryn Groch

The goose that laid the Golden Globes. The Golden Globe nominees were announced this morning in the US, and there’s a big, big surprise in the TV section — instead of perennial favourite HBO dominating the nominees, Netflix has thumped them all. In fact the streaming video giant grabbed nine Golden Globe nominations to lead all other networks and TV distributors. HBO was second with seven, down from 15 last year and the first time since 2001 it hasn’t topped the TV nominations. Netflix’s nominations were for its original TV series Narcos (2), Orange is the New Black (2), Bloodline, House of Cards, Grace and Frankie, and Aziz Ansari’s Master of None. And there was also one for its first feature film, Beasts of No Nation, with Idris Elba nominated for best supporting actor in that film. The move justifies Netflix’s commitment to original content; the company says it will spend US$6 billion on its own ideas for TV and film next year, and this week chief content officer Ted Sarandos said he planned to double the number of original TV series the company makes.

It wasn’t all Netflix, of course. Amazon’s content arm, Instant Video, grabbed five Golden Globe nominations for TV, and Hulu, the joint venture between 21st Century Fox, Comcast’s NBC Universal and Walt Disney, grabbed its first ever nomination. In fact, of the six nominations in the musical or comedy category, only two came from HBO; the other four are from either Netflix, Amazon or Hulu. And in the movies, Carol, starring Cate Blanchett, received five nominations. Blanchett herself received two nominations! NBC, which will broadcast the awards next month, failed to get a single nomination. — Glenn Dyer

Video of the day. Perhaps Donald Trump’s hair is just reacting to years of being stuck under Darth Vader’s helmet? 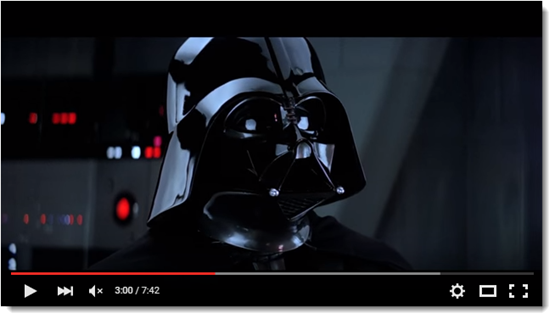 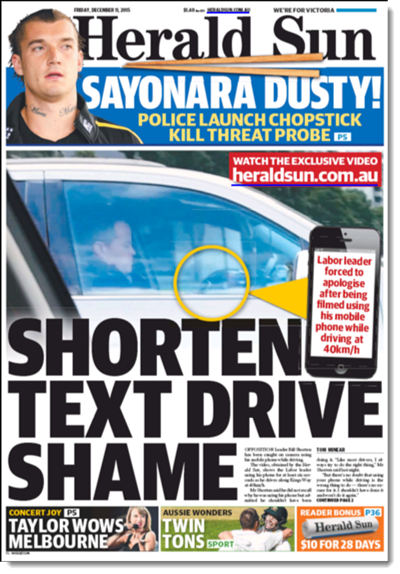 Some might call this powerful investigative journalism; but of course they’d be wrong.

It is plain DUI – the influence being the flickering screen not the road.
‘Book him,Danno!’