Paris' climate conference, COP21, has attracted an unprecedented level of media attention. Freelance journalist Nardine Groch is there to capture all the action.

I enter the media centre around 7am, disappointed at having missed a photo of Malcolm Turnbull posed next to the Australian flag.

“I would mark that spot while you can,” a journalist next to me says as I dive for an empty bench. “Trust me, the wi-fi upstairs is shit.”

She is a Dutch foreign correspondent who doesn’t seem keen on her assignment.

“Are you a COP virgin?” she asks, looking up from an email she’s sending. “Try not to freak out, these world leader days are always like this, don’t expect to sleep much.”

We exchange details, but with 3700 other journalists bustling around, I don’t expect to see her again.

I have just arrived for my first day as an accredited journalist at the biggest climate change conference the world has ever seen. It is the 21st time the United Nations Framework Convention on Climate Change Conference of the Parties will meet to try to reach an international binding agreement to tackle global climate change.

Located outside of Paris near the Le Bourget airport, the official “Blue Zone” accommodates just over 36,000 accredited participants from 198 countries and is set within a redesigned old airplane hanger with chipboard dividers and colourful animal cutouts parading the halls.

A red Eiffel Tower mock-up stands at the far end of the central corridor, marking a meeting place for interviews and peaceful demonstrations while 10,000 croissants prepared by chefs every day serve as a reminder that we are still in Paris.

The UNFCCC says the media attention at this year’s COP is “unprecedented”, with more than half of those who asked for media accreditation turned away.

“I laughed when I got the email announcing they had to cut off people’s accreditations for this COP,” a journalist from Antigua in the Caribbean tells me. “I must have sent out over 200 letters just to get funding, which annoyed me because it is such an important issue, but just look at the size of some of the news teams that are here.”

Journalists from as far afield as Tunisia, Russia, Nigeria, the Democratic Republic of Congo and Samoa have all been accredited this year. One of the largest newspapers in Bangladesh has sent its entire team to cover the conference.

“COPs before did not work, but there are signs that this one could. China and the US have already made commitments, and even Russia is now interested in signing a deal to reduce carbon.”

Fellow Australian and The Conversation’s climate change writer, David Holmes, is also attending his first COP and admits that he is finding it hard to navigate.

“You know this is the biggest newsroom in the world at the moment,” he tells me.

The constant turnover of journalists in and out of the 260 online workspaces somehow seems to work seamlessly over the 24 hours of newsroom operation.

On world leaders day, I am pelted with over 40 different invites to unscheduled panels and press conferences as well countless side events on key climate-related issues, of which there are many.

I track down journalist Adam Ramsay from UK online publication Open Democracy; he enlightens me about the number of accredited fossil fuel and oil corporate sponsors that are occupying key space around the conference site.

He has spent most of his two weeks chasing down climate change sceptics and fossil fuel and oil giants, who are here to have an influence over the negotiations.

“I put my best suit and tie on and went along to this elite club in Paris the other night and there were senior US politicians there as well as all of the corporate lobbyists, drinking together, chatting, discussing what they are going to do next,” he says.

Fight against pipeline the new ‘normal’ in climate change politics 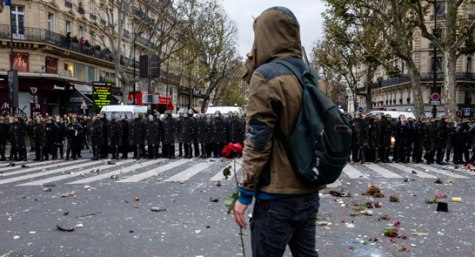 Signs of hate, signs of peace as climate protesters stream into Paris

This article should be dedicated to Dorothy Dix, not pose as a serious comment on an important matter.
On the other hand it was easy to access it, unlike the article on whether we sometimes should we help foreign governments execute Australians.
The links didn’t work which was annoying enough, but the constant offers to view a water slide video which has “gone viral” makes one wonder where exactly Crikey priorities lie.

I though that you already knew where their priorities lie Norm, you are always banging on about it.

Nardine, do get in touch again when you’ve managed to drop the ‘I’s and other folderol.

On the evidence there are three distinct groups of people accredited to the Paris conference: Journalists employed by various media – newspapers and IT media, people representing the anti-pollution groups and people lobbying on behalf oil, coal and gas. In short, millions of dollars are being spent on behalf special interests, i.e., the polluting fuel producers.
Consumerism and democracy are incompatible.