Rich and famous and Turnbull. Prime Minister Malcolm Turnbull and his wife, Lucy, hosted Christmas drinks at Kirribilli on Tuesday night, with the who’s who of politics, business and media in attendance. All bearing gifts for a good cause, the attendees were faced with a News Corp photographer on the way in to the festivities. This resulted in both the outgoing editor-in-chief of The Australian Chris Mitchell and his replacement Paul “Boris” Whittaker being papped by someone on their own staff. While Mitchell and News Corp chief operating officer Peter Tonagh posed for the snapper with their partners, Boris and his wife, Kate, looked much less impressed with the camera in their faces. 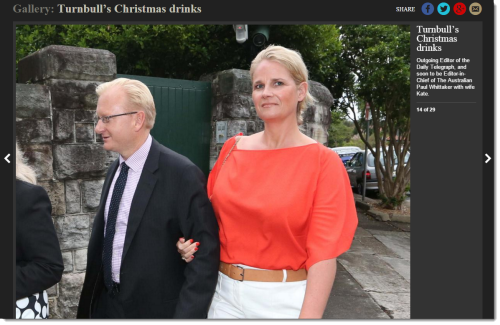 Of course, News Corp head honchos weren’t the only ones in attendance. Prime Media chief John Hartigan was there, as well as SBS managing director Michael Ebeid, and Ryan Stokes and Kerry Stokes from Seven. Not featured in the Oz‘s picture gallery is anyone from competitor Fairfax — but a tipster tells us this doesn’t mean that they weren’t invited. Fairfax CEO Greg Hywood was overseas, and chairman Nick Falloon was at the party but no photo of him made it to the gallery. ABC managing director Mark Scott was one of the first photos featured, pictured with his accomplished wife, Briony Scott, head of Wenona School. 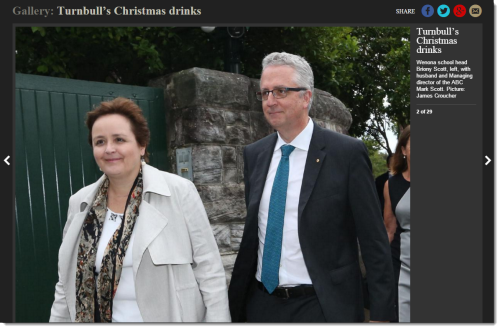 That’s not a beanbag, this is a beanbag. Yesterday Crikey‘s Josh Taylor reported that Foreign Minister Julie Bishop’s “Googly, Facebooky” innovationXChange project had spent $590 each on three beanbags for the centre, which is supposed to be “Silicon Valley in Canberra”. While Taylor and Ms Tips both tried to find beanbags worth $590, we struggled, and the best we could do was about $300. A tipster tells us that a line of luxury beanbags from the Australian brand LoveSac (yes, don’t think about the name too long) are in the price category that DFAT officials revealed to Senate estimates. The most expensive in the range is $990, for the “big one”, so maybe we did get an innovative, exciting bargain at $590.

Twitter misdirection. The ABC’s discussion program The Drum unwittingly found itself as a participant in sister channel ABC2’s Sex Week yesterday, with a simple typo in a tweet exposing the platform’s 100,000 followers to something they didn’t expect at all. The account @ABCthedrum tweeted “Finally we jump to the @HeartAus’s decision to say goodbye to the ‘Tick’ after 26 years.” Only problem is, the account for the Heart Foundation, which has made the decision about the healthy food symbol, tweets under the handle “@HeartAust” and “@HeartAus” leads to an account with the name “Love Aussie C*ck” and the pictures attached to it wouldn’t even make it to SBS on a Friday night. The tweet was deleted yesterday morning, but it has given conservative Liberal Senator Cory Bernardi yet another frontier on which to attack the national broadcaster, quoted in Fairfax saying “Of course it is easy to make mistakes on Twitter, which the ABC seems to relish in politicians.”

Bernardi was mercilessly teased on the social platform last month when he tweeted a quote from a neo-Nazi charged with child pornography offences and wrongly attributed it to Voltaire. Since then Bernardi has taken a kind of Snapchat-style approach to Twitter — deleting everything except his Christmas wishes to his followers and a reply to TV host Charlie Pickering.

Do they work on water? The Australian Competition and Consumer Commission has felt the need to warn shoppers of one of the biggest concerns approaching Christmas — the possible safety issues with hoverboards. According to the ACCC, “consumers may get caught in the Christmas rush and not take the time that they should to read instructions or warning labels”. The media release goes on to describe how to use the proper batteries and chargers, as well as saying “falls from hoverboards are highly likely”. Now we could almost stomach this overt nanny statism if there was just a single mention of Marty McFly and his hoverboard. But there’s none whatsoever. Why do you hate fun, ACCC? 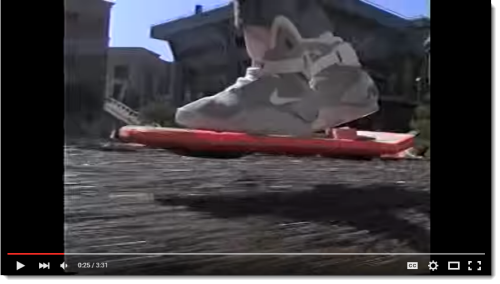 Here’s one we prepared earlier. David Gonski has been named as the new president of the Art Gallery of NSW, as reported by Crikey last month. Gonski will take on the role for the second time, after filling the role between 1997 to 2006. Gonski said in a statement yesterday that: “The Art Gallery of NSW is a special place for me and I’m thrilled to again be able to make a contribution through what will be an exciting time for the institution’s future.”

One of the attractions of the Sydney Art Gallery is that there’s usually plenty of space to move around unless it’s a day when the chattering classes want to be seen there and / or impress their circles with tales about their visits.
I’d be surprised if anyone manages to change that too dramatically.