Time chooses Merkel ... Fair Go Facebook and other media tidbits of the day ...

It’s your ABC. The ABC has been criticised for its decision to include conservative columnist Andrew Bolt as one of two stars on its new program I Can Change Your Mind About Recognition, due out in 2017.

As revealed by Crikey, the documentary will follow two passionate advocates on either side of the national debate around constitutional recognition for indigenous Australians as they attempt to change each other’s minds.

Bolt will be joined on the program by NSW deputy leader and indigenous campaigner Linda Burney.

A similar ABC documentary by the same production house, I Can Change Your Mind About Climate, aired in 2012 and was also widely criticised for giving a false impression of balance on both sides of the climate change discussion and overlooking scientific consensus. Producer Simon Nasht defended the program at the time: “I’ve had long battles with Tim Flannery about this, but I suppose if they saw Q&A [which followed the broadcast] he might even have admitted that Nick Minchin was entitled to hold his view. We create breathing space where people can have opinions without people going nuts.”

Andrew Bolt, who has previously been found to have breached the Racial Discrimination Act, told Fairfax Media he hoped his involvement in the new documentary would show that people can disagree on recognition and that “it is possible to talk about this issue without yelling, assuming the worst of each other or abusing anyone”.

In a column for The Guardian Australia yesterday, Paul Daley accused the ABC of turning the issue of recognition into a “reality TV show”: “There were plenty of Indigenous people who could argue the case against a new constitutional settlement instead of a white, rightwing columnist,” he wrote, adding that many indigenous people had serious concerns about the recognition campaign that were unlikely to be explored given the main advocate of the “no” side is Andrew Bolt.

But ABC managing director Mark Scott last night defended the decision to include Bolt on the program. When asked via Twitter why the ABC was giving “oxygen” to the News Corp columnist, Scott replied: “Because we are strong, believe in the contest of ideas, back our performance and think our audiences are smart.”

Elsewhere online the response to the program was scathing and frequently sarcastic.

Writing for IndigenousX, Celeste Liddle declared: “if there’s one thing we needed more of in the discussion on Constitutional Recognition for Indigenous People, it was the centring of the voices of wealthy, conservative white men.”

“And no conservative white male voice has been sidelined more on this topic than that of Andrew Bolt,” Liddle wrote. “What with his regular News Limited column, his blog, his TV show and his radio appearances, poor Andrew has been struggling for space to elucidate why he thinks Indigenous recognition would be racist.” — Crikey intern Sherryn Groch

Fool me twice. Voting for the Triple J Hottest 100 has opened, and to avoid a repeat of last year’s debacle (where BuzzFeed got its thousands of readers to vote for American pop diva Taylor Swift), the ABC station has introduced two new clauses to the rules:

1. Don’t troll the poll. Votes made as part of a competition that promotes a song or artist, or a campaign that undermines the Hottest 100 may be disqualified or ignored.

2. We want genuine votes, from genuine listeners. If we feel something’s preventing that from happening, we’ll look into it for you and take appropriate action.

Last year Taylor Swift’s Shake it Off was disqualified from the countdown, though the station did reveal she’d have come in at number 12 if her votes were counted. — Myriam Robin

FairFacebookFax. Fairfax has become the first Australian publisher to start putting articles on Facebook’s Instant Articles platform. The platform offers readers quicker load times (important for mobile) by loading articles from participating publishers directly into Facebook, with ad revenue from those pages being given to the publisher rather than the social media network. But that could change in the future — a fact that’s made some overseas publishers somewhat sceptical of the experiment, as it could see them give Facebook extraordinary control over their distribution. Facebook is by far the largest driver of traffic to news websites as far as social media goes.

In a statement, Fairfax editorial director for metro media Sean Aylmer said the publisher would be sharing “a significant number of our news stories” on the platform, giving readers a more “immediate, radically improved and more engaging mobile experience”. — Myriam Robin

Not this Time. Donald Trump spat the dummy overnight when he failed to made Time magazine’s person of the year. Time editors awarded the gong to German Chancellor Angela Merkel. Second, gallingly for Trump, was Islamic State leader Abu Bakr al-Baghdadi. Trump was third.

So, naturally, he took to Twitter to bag the choice, saying Merkel was “ruining” Germany. 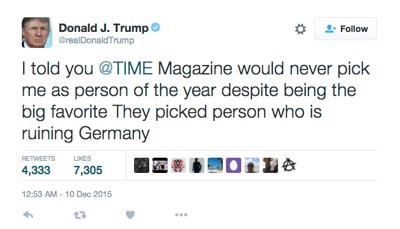 Time managing editor Nancy Gibbs explained why Trump was not the top choice and came in third.

“If he is as good at winning votes as he is at winning news cycles, then in the months to come he may well position himself that we may be here a year from now.

“In the history of Person of the Year, we’ve actually never named a presidential candidate as Person of the Year.” As to Trump’s previous critique that Time wouldn’t give him the honor, Gibbs said: “If he thinks he deserves it, he has the whole next year to let the voters decide that.”

The Person of the Year edition of Time is out on Sunday. — Glenn Dyer

Front page of the day. A long-awaited number … 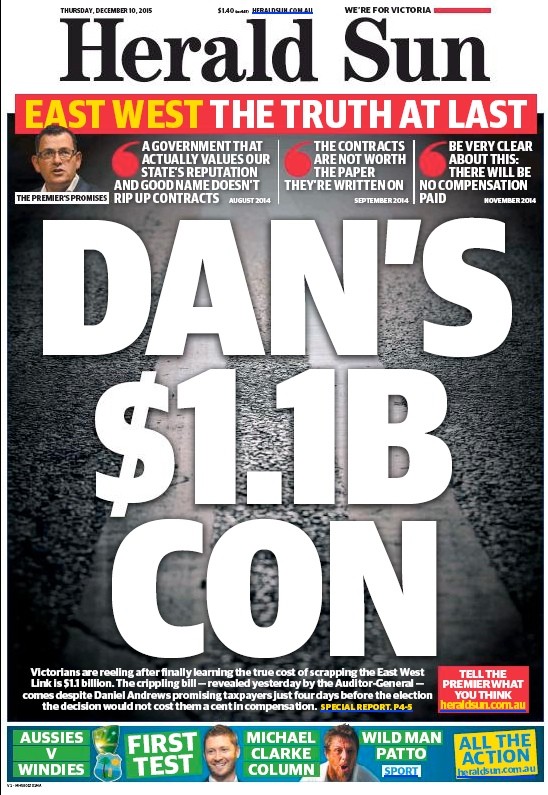 With Andrew Bolt’s background observing the machinations of Labor Powerbrokers and their ABC / SBS mates, he’ll be more qualified than the numerous usual suspects, won’t he.