A man of style. As previously reported in Crikey, when Kevin Andrews was unceremoniously dumped from the frontbench he did not lose all his perks — he took a $13,000 set of Chesterfield couches, originally bought for John Howard’s prime ministerial office, with him. The fate of the fabled couches, which originally caused consternation among parliamentary staff who felt they didn’t fit in with the decor, was discussed in Senate estimates in October, and according to documents, the whole suite of Chesterfields, including lounges and armchairs, now reside in Andrews’ office. The armchairs had sat in the office of Liberal backbencher Jason Wood, but went to Andrews when Wood lost his seat in 2010. Ms Tips thinks that might make things a bit cramped, but being anachronistic and out of place has never bothered Andrews before.

Cost of change. Speaking of ministerial furniture, what is the cost of moving a $15,000 bookcase? Also revealed in Senate estimates documents is the cost of moving Attorney-General George Brandis’ bookcase from the office of the deputy Senate leader to that of the Senate leader, an office to which he was promoted after September’s leadership change. It cost $1174, excluding GST, to get an external contractor to move the bookcase. The $15,000 bookcase was purchased after a $7000 bookcase was purchased in 2010, but couldn’t be moved to Brandis’ new office with the change of government. It also cost $350 to re-paint the wall in Brandis’ old office where the bookcase had been. The Senate documents also include pictures of the bookcase and Brandis’ couch and coffee table, which were also moved — while his colleague Andrews is hoarding Chesterfields, Brandis has a much more modest lounge: 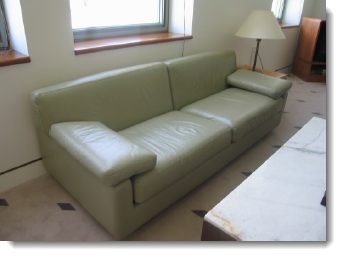 The cost of changing prime ministers isn’t limited to moving bookcases, but also installing new nameplates for the many ministerial changes that came with the ascension of Malcolm Turnbull. It cost parliamentary services $3045 to reflect the change of prime minister and ministers, more than the cost of the change from Kevin Rudd to Julia Gillard and back to Rudd combined. The first Labor spill cost the Parliament just $720, and the second one cost $2227.50.

Crosby has a soft spot. In a rare public appearance last week, Aussie political strategist-turned-Tory saviour Lynton Crosby ruled out doing the 2020 election for the British Tories, as well any involvement in campaigns to help Britain exit from the European Union. He will, however, be working on Zac Goldsmith’s campaign to become mayor of London.

In a seemingly rather candid public chat with students at the Oxford Union, captured by Politico Europe, Crosby, rather intriguingly, slammed the British press for making a big deal out of Labour leader Ed Miliband’s messy consumption of a bacon sandwich, saying it was “unfair, unwarranted [and] irrelevant … nothing to do with his policies”. You can read the whole thing here.

Where is the money going? Are taxpayer dollars going towards a company that is being investigated for bribery and has some interesting family ties? A tipster tells us that Lifese Engineering has been contracted by Leighton Holdings for work on the NSW WestConnex and some rail projects. Lifese Engineering’s directors are Mamdouh Elomar and Ibrahim Elomar, father and uncle to Mohamed Elomar, an Australian man killed while fighting for Islamic State. Mohamed Elomar is perhaps best known for posing with severed heads of victims believed to have been killed in Syria. There is no suggestion that either Mamdouh Elomar or Ibrahim Elomar are connected to terrorism. Lifese Engineering is being investigated under foreign bribery charges, with allegations that the two attempted to bribe Iraqi government officials in order to secure lucrative contracts for the company in Iraq. We asked Leighton Holdings, now known as Cimic, if Lifese was a contractor on the project and were told they wouldn’t be commenting on the matter.

Please like me. Embattled Victorian Labor MP Cesar Melhem has turned to Facebook to gain support, but isn’t quite ready to show users his face. A tipster saw this sponsored post for the pollie last week, encouraging him to like Melhem’s page. Melhem is currently fighting allegations of corruption during his time as a union leader, with the trade union royal commission being advised that criminal charges should be laid against him for deals done with employers while he ran the Australian Workers’ Union. Melhem is looking for likes, but the sponsored post features only a map of his electorate — Melhem himself isn’t seen until users click through. 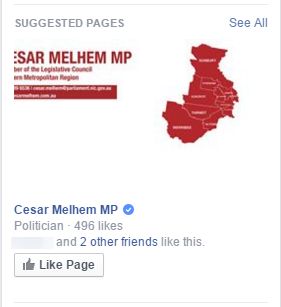