Redundancies in Cairns, court wins in Melbourne. And other media tidbits of the day.

The email, sent to a government media adviser and sent on to the rival indy news site, has Dalton writing:

“FYI more redundancies here. The NIE journo, plus marketing director and his offsider and another in circulation. The real estate editor vacancy is not being filled nor sports journo Murray Wenzel when he leaves later this month.

“Court reporter Harry Clarke is joining Nine in Brisbane also this month and the editor is having to fight to replace him.

“Crazy really when … our circulation, while still falling, is not as dramatic as all other regionals.”

The Cairns Post‘s circulation Monday to Fridays is 16,643 and nearly double that on Saturday. It’s weekday edition lost 5.8% (7.7% on Saturday) over the past year, according to the most recent circulations survey. The tabloid has been around since 1883. Cairns Now reports the redundancies are only the latest job cuts, with many roles in marketing and management in recent years outsourced to Brisbane. — Myriam Robin

McKenzie gets a court win. In late breaking news, multi-millionaire Melbourne grocer Antonio Madafferi has failed in his bid to force Age investigative journo Nick McKenzie to reveal his sources for a series of articles that alleged criminal activity on Madafferi’s part, including, according to the ruling, “murder, extortion and drug trafficking”, and that Madafferi is “head of the mafia in Melbourne”. A judge this morning refused Madafferi’s application for preliminary discovery. The full ruling is here.

Data from regional markets though was available and showed that Seven scored a smallish win over Nine, with Ten third, in front of the ABC. Ten finished the 2015 season of TBL families last night. Ten issued partial figures showing an OK performance by the final episode of The Biggest Loser: Families. These are all preliminary and there is no way of verifying them without the final data for Perth and regional WA. We will know tomorrow and report it. — Glenn Dyer

Journos claim victory. Journalism union, the Media, Entertainment and Arts Alliance, has claimed victory in defeating changes that would have had some information publicly available to journalists about company directors taken off the public registry.

Earlier this year, in submissions to a Productivity Commission report looking at ways to reduce impediments to business set-ups and closure, the Governance Institute of Australia, which represents company secretaries, argued the current information available through ASIC leaves directors vulnerable to identity theft and personal harassment. When this became public, it prompted a backlash from the country’s business and investigative journalists, who argued the information, which includes residential addresses and dates of birth, was crucial to allowing journalists to cross-reference directors across different databases.

On Monday ASIC put out its formal response to the inquiry, and it recommended the adoption of a director identity number for identifying company directors. But it also stated in its report that:

“There should be no lessening of the existing recording of, and means of accessing, director information.”

The recommendation follows a fierce campaign by the MEAA against the proposals to remove information fro the public registry. In July dozens of journalists across most of Australia’s media organisations signed an open letter to then-assistant treasurer Josh Frydenberg urging for the retention of the existing scheme. MEAA representatives also embarked on a lobbying trip to Canberra, meeting with key officials to urge against the change.

Key to the campaign was MEAA Victorian media section president Ben Butler, who writes the Margin Call column in the Oz.

Speaking to Crikey this morning, Governance Institute policy director Judith Fox said the body would continue to advocate for reform in this area. “In this age of big data, that degree of personal information can be used for identity theft,” she said. She welcomed the adoption of director identity numbers, saying it would help to easily identify who controls companies. — Myriam Robin

Santa comes early for mendicant Murdochs. Guess who has the begging bowl out for an early Christmas present? Why, those hard-up family companies of the struggling Murdoch clan — 21st Century Fox and News Corp. US media reports this morning say there has been a change of heart by the Port Authority of New York and New Jersey (one of the most politically malleable organisations in America) about giving the two Murdoch clan companies financial aid to shift their global HQs from midtown Manhattan down to the planned World Trade Centre 2 building. The Authority originally ruled out any aid for the building (in fact there was a plan there would be no public sector support for the planned building at all). But now that seems to have changed with media reports saying the plan is on the agenda for the Port Authority’s Thursday meeting.

Poor News Corp and struggling Fox would get, between them, US$43 million of rent cuts from the authority (some of which is to be repaid after they move in, but we shall see). New York State will offset that with US$15 million and there’s a tax credit of US$10 million, cutting the net cost of the authority’s aid to the Murdoch clan to US$8 million. But that math is wrong; all up, the cost to the public purse in New York will be US$73 million (or just over A$100 million). It is the season of giving (and to be jolly) I know, but giving two wealthy media companies tens of millions in taxpayer money, when the companies are controlled by one of the wealthiest families in the world, is too generous a deal by any measurement. — Glenn Dyer

Front page of the day. The Courier-Mail protests the outcome of the Baden-Clay appeal hearing … 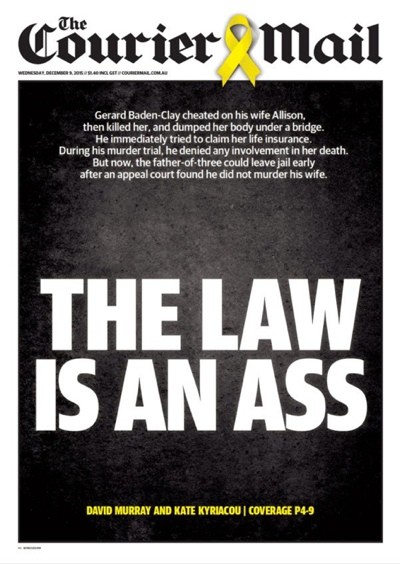 Why do we need a judicial system – or an electoral for that matter – while ever we have Limited News?