It was all about defections and exits in this week's media coverage.

Despite the final Parliament sitting of the year being held last week, the media’s focus on PM Malcolm Turnbull hasn’t slowed heading into Christmas, with tax reform, climate change, terrorism, the Peter Slipper case, and what some have argued as cracks within his party following the defection of former minister Ian Macfarlane over to the Nationals. A leaked COAG document reportedly shows eight options for tax reform, including six GST options and two Medicare levy proposals, half costed by Treasury. Turnbull and Minister for Industry and Innovation Christopher Pyne also released a new innovation statement, which circled around the “Ideas Boom” and outlined new US-style bankruptcy laws to give businesses the “freedom to fail” and get back on their feet quickly.

With Fairfax’s Shirtfronted series spotted in hand, Former PM Tony Abbott remains in second place, following an interview where he called for a “revolution within Islam” and said Australia has a “lack of cultural self-belief”. He also — unsurprisingly — claimed he would have won the next election and that his first budget was fine. Special Minister of State Mal Brough, up five places this week into third, is still copping a lot of heat from the Opposition over the Peter Slipper affair, and has fuelled many opinion pieces about whether the PM should tap him on the shoulder.

It was leaked last Thursday that former minister Ian Macfarlane would defect to the Nationals, with rumours former Chief Whip Scott Buchholz is also considering the move across. Macfarlane said he would accept a ministerial position if one was offered, and denied it was an attack on the PM for dumping him from the front bench. Macfarlane’s move pushed (the usually invisible) Deputy PM Warren Truss our index in ninth place. 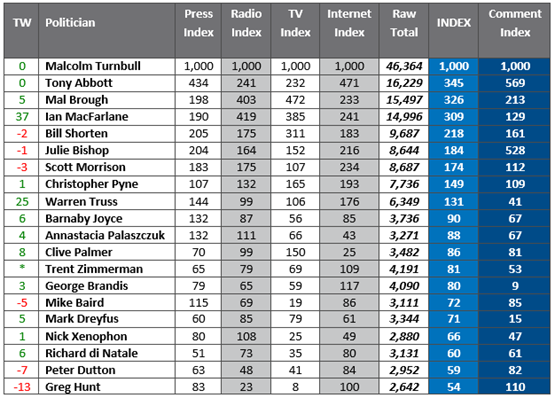 Turnbull’s interview with Leigh Sales, former Treasurer Joe Hockey’s appointment to US Ambassador, and Abbott buying a fridge off Gumtree was discussed on social …

…while talkback was experiencing a throwback to Choppergate after Foreign Minister Julie Bishop chartered an empty private plane for $30,000.

Were he still an MP, Joe would have placed fifth on this week’s index, following yesterday’s announcement he would be our ambassador to the US. He also told businessman Mark Bouris that if he had stayed in Parliament, it would “be overwhelmingly about getting even with people that brought me down”.