Hockey down but not out. Canberra’s worst-kept secret was made official today, with former treasurer Joe Hockey announced as Australia’s next ambassador to the United States. Hockey has also given his first interview since getting booted from the job of treasurer, to businessman Mark Bouris, founder of Wizard Home Loans and host of Celebrity Apprentice, as part of his podcast series The Mark Bouris Show.

It’s an unusual choice for an exit interview, but Bouris opens the podcast by emphasising that he and Hockey go way back. It’s an interesting insight into Hockey’s frame of mind, with Bouris opening by asking if Hockey had ever imagined that he would be treasurer of Australia. “Nah, I thought I’d be prime minister,” Hockey said. He still seems excited about Australia’s economic policy, speaking at length about how Australia should help businesses and the opportunities in Asia and saying “governments are bad investors”. Hockey also explained why he left politics, saying he would have been too focused on “getting even with people,” after the spill that booted him and Tony Abbott from their powerful jobs.

“If I was going to stay it’d be overwhelmingly about getting even with people that brought me down.”

“I love my country and my family more than I hate my enemies.”

We wonder if Tony Abbott, Kevin Andrews and Eric Abetz will tune in and take note.

Commissioner gets new gig. Former high commissioner to Papua New Guinea Deborah Stokes has landed a new position, named as the Australian appointment to the Asian Development Bank late last month. Stokes left the role in Papua New Guinea unexpectedly in July this year, eight months before she was due to finish the role. At the time DFAT was not forthcoming about why Stokes had left the role, saying that she would take up another overseas posting. It came after a few months of tension between PNG and Australia, including when it was announced in the May budget that Australia would establish a diplomatic mission in Bougainville. Know more? Drop us a line.

Can’t unsee. The ACT government has decided to celebrate Christmas this year by getting residents of the nation’s capital excited (or “re-psyched”) abour recycling. It’s so disturbing it made Ms Tips want to recycle her eyeballs. 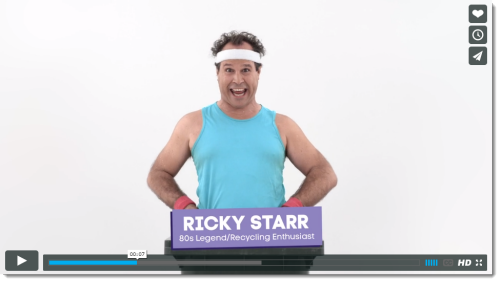 NUS curbs spending. The National Union of Students got $89,482 less in affiliation fees in 2015 than it did last year, as campuses like Sydney University voted to reduce the money they send the national body.

Affiliation fees have long been a controversial issue at student unions, with some campuses receiving discounts while others paid the bulk of NUS’ expenses. But a financial statement distributed to delegates yesterday and seen by Crikey shows NUS has curbed spending, posting its first net surplus ($117,020) in some years despite the lower affiliation fees, which comprise most of its income. Wages and employee entitlements were significantly curbed, though expenditure on elected office bearers remained steady, and the amount spent on office bearers’ mobile phones rose from $3925 to $9362 over the year. The body spent only $25,644 on campaign costs, down from the $32,421 it spent in 2014.

Yesterday kicked off the start of its yearly (and rowdy) national conference, where delegates from affiliated universities hone their skills in political skullduggery while fighting over paid office bearer positions, which set the body’s direction for the rest of the year. As is customary, one of the first motions passed by NUS banned all photography and video from the conference floor (narrowly passing to cries of “shame” with bloc votes from the Labor Right [Unity] and Left [National Labor Students], who comprise the bulk of votes on the conference floor). Not that there’s much shocking about that — it’s almost always one of the first motions passed at the conference. The other customary motion is to extend the conference floor to wherever people head outside to smoke — that way the conference doesn’t keep losing quorum.

Memory — all alone in the moonlight. The LNP in Queensland is struggling to find issues with the Palaszczuk government, with this Facebook post by opposition leader Lawrence Springborg taking them to task for an error that will have lasting consequences for the state. Springborg took to Facebook yesterday to say that Premier Anastasia Palaszczuk was “holding Queensland back” because a new arts guide had printed the wrong date for the premiere of the musical Cats. The post has since been deleted — perhaps Macavity at work? 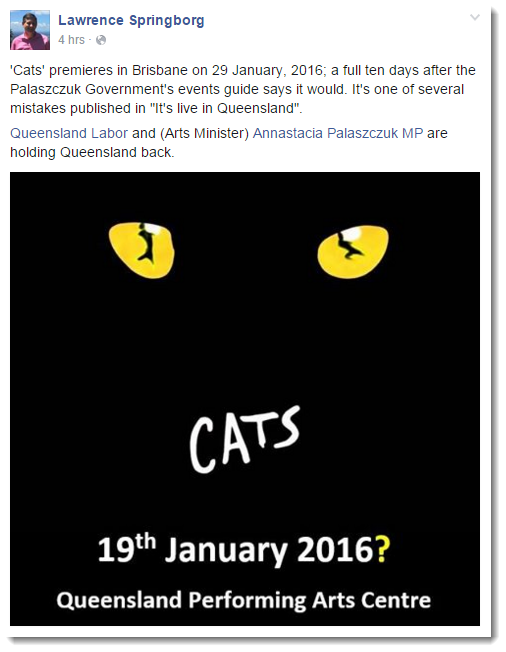 Hockey-would.
[“Reward for effort”? “Mal-practice” (Brough justice anyone)? Another MT Party/PM pick?]
Who better, gifting Hockey this US gig to go with his pension? After all as Shadow Treasurer he did so much to try to talk down the economy and as Treasurer did so much to run it down?
One of his first acts as Treasurer was take a spade to the deficit hole and dig out another $9 billion for the RBA?
He did so much to end the Age of Entitlement : while deftly saving deep pockets of entitlement, leaving them untrammelled?
[Who knows, when Ban-ki Moon has had enough maybe Windbag will try to get Abbott that gig – after all he was “such a great PM” that he had to be dumped?]

Hockey..a rotund leaner with a vastly overblown sense of his entitlements and his abilities .. a one man Dunning Kruger PHD study.. At least we are finally treating the yanks with some of the disdain they deserve..

Double dipping too. Wonder if Turnbull will reverse this nasty policy for other folk?

“If I was going to stay it’d be overwhelmingly about getting even with people that brought me down.”

So how do you get even with yourself in that circumstance?