Australia also spent more than $137,000 reinforcing that Turnbull's refugee policies are just as hardline as Abbott's.

The Australian government spent over $20 million on charter flights from Australia to Nauru and Manus detention centres in the last financial year.

That is according to Senate estimates documents released overnight. There are three contracted charter aircraft: an Adagold Boeing 737, a Skytraders and an Airbus. Together they cost $40.8 million in fixed costs, but on top of that there were 68 onshore trips and 11 offshore trips in the last financial year, which combined cost more than $20 million. About $17 million of this cost was on Nauru alone.

The government’s attempt to get a pregnant asylum seeker out of Australia and back to Nauru late on a Friday night in an attempt to thwart potential legal efforts to keep her in Australia cost the taxpayer $115,000 in charter flight costs.

On September 3 this year, a 23-year old Somali asylum seeker known as Abyan, held in the Nauru detention centre, told International Health & Medical Services (IHMS) she wished to terminate her pregnancy, which she alleged was as a result of being raped while in the detention centre in July. The department wasn’t informed that Abyan wanted to terminate the pregnancy until September 14, and Abyan wasn’t brought to Australia until early October, when she was over 15 weeks pregnant. Documents reveal Abyan received nine consultations with healthcare professionals while in Australia, but only one was with a GP and a nurse at a clinic where the termination procedure was supposed to occur.

After less than a week in Australia, and before she was able to terminate her pregnancy, on October 16, Abyan was sent back to Nauru on an RAAF jet via the Solomon Islands at a cost to the Australian taxpayer of $115,821.66.

Immigration Minister Peter Dutton claimed at the time that Abyan had opted against terminating the pregnancy, something Abyan’s lawyers strongly denied. Shortly after conservative Australian columnist Chris Kenny spoke with Abyan (he was the first journalist to be granted a visa by the Nauruan government in some 18 months), she was brought back to Australia in early November. Crikey understands Abyan is still in Australia receiving medical treatment.

Documents released by the government overnight also reveal the Australian government spent $138,000 on a marketing blitz in Indonesia to demonstrate the shift from tough-talking Tony Abbott to Malsplaining Malcolm Turnbull did not mean a change in Australia’s hardline asylum seeker policies.

After Turnbull became prime minister in September, The Australian reported that the “highly developed people-smuggling industry” was ready to test Turnbull’s resolve to uphold Tony Abbott’s harsh policy on boat turnbacks and no resettlement in Australia. So concerned was the government that Turnbull made statements that those coming to Australia by boat without a visa would not be settled in Australia. “They will never come to Australia. I know that’s tough. You could say we have a harsh border protection policy, but it has worked,” he said.

The Department of Immigration and Border Protection has now revealed that the government was keen to get the message out that although there had been a change of leader in Australia, the policies remained the same. In Senate estimates, department secretary Michael Pezzullo characterised the “ad blitz” in Indonesia as an “intensified” public information campaign explaining that the “way to Australia is shut”.

In response to a question on notice from Senate estimates released this week, the department confirmed that it had spent $137,764 on the advertising campaign commenced between September and October, which coincided with Turnbull becoming prime minister and Australia’s decision to take in 12,000 Syrian refugees. The department also tabled a pamphlet in multiple languages distributed in Indonesia since Turnbull became prime minister that specifically highlights that although there has been a change of prime minister, the policy remains the same. 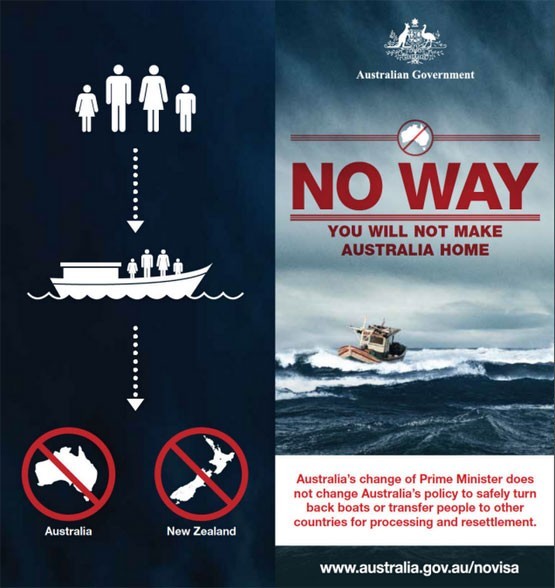 “Australia’s change of Prime Minister does not change Australia’s policy to safely turn back boats or transfer people to other countries for processing and resettlement.”

In a translation of the Indonesian included on the pamphlet, the government makes it clear that it is “impossible” to get to Australia:

Australia is still committed to protecting its borders and will continue to stop whoever tries to come illegally on a boat – no matter where they’re from.

The Australian government’s announcement regarding the resettlement of those who are running from conflict in Syria and Iraq will not influence the Australian policy of stopping people who try to go to Australia illegally by boat.

The change in Australian Prime Minister doesn’t change Australia’s policy of safely returning boats or moving people to different countries to be processed or resettled.

The PM of Australia says that there will not be resettlement in Australia for people who are on Manus and Nauru –they will never come to Australia.

Don’t believe the lies of people smugglers. There’s no one who comes illegally by boat that gets to call Australia home.

This regulation applies to everyone. There is no exception.

Other responses to questions on notice reveal that of the 931 asylum seekers in Manus and the 620 in Nauru as of October 20 this year, fewer than five in each centre are from Syria. In the last financial year, the government spent $1.2 billion in total operating the Manus and Nauru detention centres. It has budgeted for $704.36 million to run the detention centres this financial year. The department has said it expects to save $77.5 million over the next five years in contracts for the regional processing centres by consolidating five service provider contracts down to three, and with a forecast reduced number of asylum seekers in detention. Where the remainder of the approximately $500 million in savings will come from is unclear.

As you’d realise, Josh, this scale of waste will please any intellectually challenged advocates who’ve been aiming at undermining Government actions to safeguard the best interests of Australian Citizens.

“Documents reveal Abyan received nine consultations with healthcare professionals while in Australia, but only one was with a GP and a nurse at a clinic”
AH ELUSIVE TRUTH… Every time a person presents at the medication window for a panadol -this is a “consultation”
or to ask to see a doctor and even if no doctors appointment is made- this is aconsultation.
You have to get in the zone to understand IMMI-Speak, the highest form of obfuscation.

Pamela, before earning your Sherlock Holmes cap you’ll need to check out what services are covered by the term “consultation” and which were involved. I realise that vague assertions are the modus operandi of the Crikey Commissariat and its fervent acolytes, but why not try to lift your game above their nadir levels?

@NH I thought all you fascist/Racists had decided it was all about stopping the drownings,not self interest..

Makes you proud to realise there’s never been a more exciting time to be an Australian..