One of these things is not like the other. Numbers can be hard — sometimes they don’t add up, no matter how hard you try. In today’s Media Diary, lacking the Markson sparkle, Darren Davidson and Jake Mitchell write that losses at the Guardian’s Australian outpost “have blown out to $14 million” in the financial year ending June 30, 2015. Losses are up $6 million on the year before, write Davidson and Mitchell: “The digital edition’s financial troubles show the value of a paywall.” To really bring home how much trouble the colonials are in, Diary compares Guardian Australia to The Australian‘s financial position. Yes, really. According to Davidson and Mitchell, the Oz “has built a profitable digital subscription and advertising business with annual revenues of $20m”. The thing is, comparing the Oz’s revenues with The Guardian‘s losses isn’t a fair comparison. Revenue doesn’t equal profit, young men, and according to the News Corp financial documents published by Crikey last year, the Oz was News Corp’s worst performer in the financial year ending in 2013 — with an operating loss of $30 million. And yes, those figures are two years old, but it’s hard to believe that the Oz has been running at a profit since then.

Sounds great, right? Even though it was commissioned under Tony Abbott, it’s sounds all innovatey and agiley and Turnbullesque. But go to the section on risk management for some prize shinyarsery. Identified as one of the “five key risks to transforming the way the Commonwealth manages public sector data” is

Wait, what? So PM&C think it’s something to be worried about that people might use public data to identify that government policies have failed? And how does it propose to address this horror scenario?

That is — surveil who accesses your data, restrict how it is released, and try to stop researchers from saying bad things about you. Thank goodness the command-and-control mindset hasn’t gone away in the new era of agility.

Christmas cheers. It’s not just News Corp that is putting the screws on Christmas parties — Fairfax’s regional publications are also feeling the pinch. Staff at the Ballarat Courier were told there wouldn’t be a Christmas do this year because of budget issues. It’s possible that they aren’t the only ones to miss out on Christmas cheer (and Christmas bubbly), with a tipster saying that other parties might have been cancelled across Fairfax regional. It hasn’t helped the mood that a photo gallery of The Sydney Morning Herald do was sent out in the weekly bulletin to staff, a tipster says. “I’m sympathetic that their booze got turned off before 10pm but we were under the impression that everyone’s party got canned, so the glamorous pics stuck in the craw a little.” Speaking of parties cancelled and then not, staff at News Corp in Hobart were spied imbibing in some Christmas cheer on Saturday night:

“Mainland News journos had to make do with a crappy picnic but The Mercury staff seemed to be enjoying a Christmas party at a posh Hobart restaurant Saturday night. But they didn’t have to travel far — the restaurant is in the ground floor of their building.”

Got any Christmas party goss? Budgets slashed, or is there still enough in the coffers for your boss to sing Islands in the Stream at karaoke? Drop us a line, you can remain anonymous if you wish.

Draw me. Some pollies hand out books to the children of their electorate, but it looks like one Victorian MP has come up with a better idea — giving the kiddies a picture of his face. The windows of Victorian MP Graham Watt’s office are covered with coloured-in caricatures of Watt. The state member for Burwood, who made headlines last month for staying seated in parliament during a standing ovation for Australian of the Year Rosie Batty, has been inviting his local electorate to colour in his caricature and is now displaying the results proudly in his windows. Perhaps another brave tactic in his self-styled “war on graffiti”. 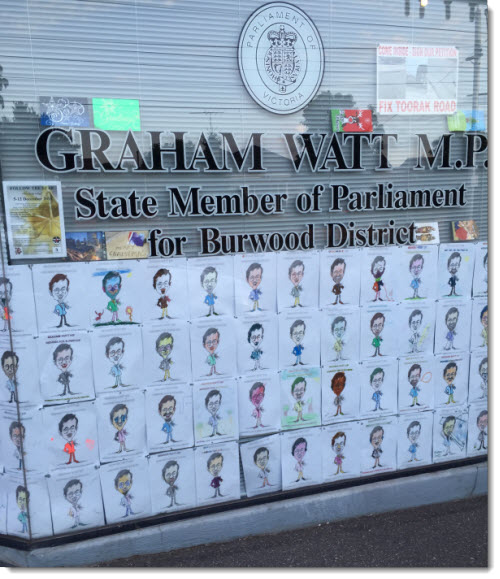 Pretty sure the Oz story was attempting to compare the Oz’s digital revenues ($20m) with the Guardian’s ($6m), which is fair.