Audiences vastly prefer Insiders to The Bolt Report. Plus other media tidbits of the day.

Insiders trumps Bolt Report in 2015. Insiders finished 2015 clearly in front of the Sunday morning chat shows — with daylight in second — and well clear of the self-indulgent contribution from Andrew Bolt on The Bolt Report, which also went on a summer holiday yesterday.

It is a tribute to Barrie Cassidy and the producers of Insiders that it has established clear supremacy on a Sunday morning. Like with Laura Tingle from the Fin Review and Laurie Oakes from Nine, you know what you get from Cassidy every Sunday morning: interesting, informative political discussion and insight. Contrast that to what you get from The Bolt Report, where its hard to work out the dividing line between comment, personal views and ideology. The TV audience certainly has worked out where the dividing line is and they clearly prefer Insiders.

Another big difference between Insiders and Bolt is the entertaining video story telling efforts of Huw Parkinson, which won him a Walkley gong last week (and deservedly so). Reporting/storytelling is no longer the preserve of print or linear TV forms. — Glenn Dyer

Seven West up, down. Last week was a bit of a rollercoaster for Seven West Media shares. Kerry Stokes’ struggling media company enjoyed its strongest week’s trading for more than a year. By Thursday, the shares were up 21.5% as they leapt from 69.50 cents at the opening last Monday, to 84.50 cents — all without a “what’s going on?” query from the ASX. That close on Thursday was the highest the shares have been since August. But on Friday, down they went, losing 5 cents (or 5.9%) — again without a raised eyebrow. There’s been nothing from the company. Seven did well in the ratings battle in the first week of summer, but that was no big deal.

The share buyback continues and is keeping the shares above around 75 cents. So far, 5.2 million shares have been bought back at a cost to shareholders of $5.6 million — it’s a $75 million buyback over the year from early October. Perhaps silly punters tried to position themselves for an expected announcement on media law reform. But that is now off until 2016, and probably won’t happen until after the next federal election. By the close on Friday, SWM shares had gained 14.4% for the week, and it was the third-best performing stock in the ASX 200. The shares of rival Nine Entertainment Co. rose 8.3% last week, after dipping 1.4% on Friday. — Glenn Dyer

Front page of the day. The New York Times puts its anti-gun editorial on the front page — the first time it has done this for an editorial since 1920 … 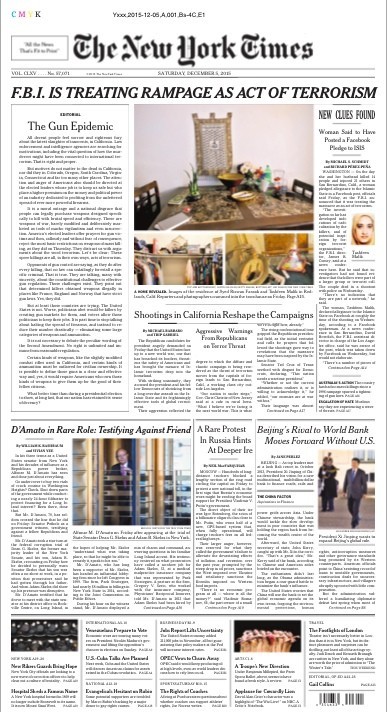 Bravo to the NY Times.

As the Blot Report, such a limited market for that idealogical twaddle.

Added one to Bolt’s ratings on Sunday. Brandis was positively mordant from the start to finish of Bolt’s interview. Gone is the triumphalism of the right-wing and their favourite showcase.

Is Rupert subsidising TEN too – like he does The Oz?

The watermark at the end of the Blot show sez ‘A News Corp production’.