Journalism's night of nights ... Whish-Wilson forgets about own inquiry ... name that glider ...

Walkleys and drinkies. Taking place at Crown’s Palladium in Melbourne, this year’s Walkley Awards ceremony went off without a hitch or controversy, except for the poor quality of the online broadcast, which drew online derision. Last year a high-quality stream was brought undone by an unruly crowd, while this year a well-behaved crowd was done a disservice by the low-quality broadcast. Host David Speers fulfilled his role well, ever dapper in some fetching glasses, but the best presenter of the night (judged by someone other than the biased Ms Tips) was Stephen Mayne, who along with Marina Go was one of the most lively presenters of the night. As Mayne and Go entered the stage, footage of Mayne’s 2006 run-in with Glenn Milne was played, and while Go threatened to give him a shove, no one took Mayne off the stage prematurely. The mood was somewhat sombre on the night, with reminders of journalists who lost their lives over the last year. It was also a pessimistic tone that came across from investigative journalists who wondered to Ms Tips if their craft would survive the next 10 years. “We’re fucked,” said one producer.

The Project’s Waleed Aly stole the show though, along with his band Robot Child, who performed Pink Floyd’s Comfortably Numb. Aly’s guitar playing was something to behold, making many in attendance wonder if there was any thing he could not do. If the producers at Channel Ten know what they are doing, Aly’s next blistering editorial will be more shareable if it also features an epic guitar solo.

Many big names were in attendance, with the glamour set to 11 . Ms Tips spotted new media editor of The Australian Darren Davidson, and thought that the nickname Lurch seemed somewhat unfair. Communications Minister Mitch Fifield was noticeably absent, though some pollies did make an appearance. Labor’s Anthony Albanese and Sam Dastyari were in attendance, as was Howard-era Liberal minister Peter Reith — though none of the pollies were seen at the after party in one of Crown’s many bars (seemingly the one furthest away from the original venue). The cover band was playing pub-rock classics, with Ms Tips particularly enjoying Summer of 69. When the cover band finished and the young people’s dance music started, more than a few media identities could be seen busting a move. BuzzFeed‘s Mark di Stefano was one with exceptional skill on the dance floor.

Ms Tips and her minions were charged with one special duty on Walkleys night. Armed with swabs to test for cocaine residue, we searched the male and female bathrooms with care. Alas, the tests showed up negative — budget cuts really are cutting deep.

What inquiry? When the Greens backflipped and decided to give in to the government on tax transparency yesterday, they issued a media release that explained how great what they had done was. And in order to forestall criticism that they had missed the chance to achieve real transparency for companies currently exempt under grandfathering arrangements from financial reporting requirements, senator Peter Whish-Wilson assured us “today’s result will help build momentum to consign them [the grandfathering provisions] to the scrap heap.” How so? Because “In the new year the Greens will work with Labor and the cross-bench to bring the remaining Grandfathering provisions before a Senate Inquiry. I want to hear the arguments from those who remain on the list as to why their tax affairs should be protected from the public gaze.”

Well, OK — that’s some comfort, a Senate inquiry. Not much but, sure, we’ll take it. Except, last night in an exchange with Crikey’s Bernard Keane, a stroppy Whish-Wilson seemed to forget all about the inquiry he’d been promising earlier in the day. Suddenly the inquiry where Whish-Wilson was going to put the the beneficiaries of grandfathering on the spot became an “idea … Be interesting to see if it gets support.” But “there is no inquiry, it’s not in the mix.” 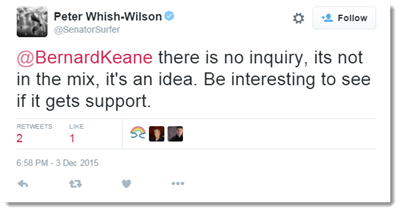 We’ve never seen a token excuse for a backflip abandoned that fast for many years.

George Christensen’s reading material. Flags, faxes and interesting reading material are among the expenses items claimed by our federal politicians this year. Far-right Queensland MP George Christensen claimed expenses for more than a dozen books covering radical Islam, American politics and conservatism. Christensen bought seven books on Islam and ISIS: No, We Can’t: Radical Islam, Militant Secularism; What went wrong? The Clash Between Islam and Modernity in the Middle East; Rise of ISIS; While Europe Slept: How Racial Islam is Destroying the West from Within; The Crisis of Islam: Holy war and Unholy Terror; The Islamist Pheonix; The Rise of the Islamic State and the new Sunni Revolution.

He also brushed up on his knowledge of conservatism and conservative politics, charging the taxpayer for How to be a Conservative (in case he forgot?); Blue Collar Conservatives; The Meaning of Conservatism and A Political Philosophy: Arguments for Conservatism. As if he didn’t have enough to read, Christensen also stocked up with American Dreams; The Way Forward: Renewing the American Idea; No Apology: Believe in America and The Great Betrayal: How American Sovereignty and Social Justice are being Sacrificed.

Christensen also purchased one book relevant to Australia, and published by Connor Court, a small Ballarat-based press (which also published Cory Bernardi’s The Conservative Revolution). Written by ex-MP Gary Johns, The Charity Ball: How to Dance to the Donor’s Tune now graces Christensen’s bookshelves. Its website says “Too many charities in Australia do little or no charity work, too many receive most of their income from government, and too many lobby government for more. Gary Johns analyses the charity sector and concludes that a better informed donor is essential to drive better charity.” We’re lucky that Christensen is looking into the real rorts in Australia — charities.

Live your David Attenborough dreams. Scientists in the Northern Territory believe they have found a whole new species of gliding possum, originally thought to be a sugar glider, is now “likely to be a species new to science, rather than just a northern population of the already well-known sugar glider”. In order to fund research on the cute little critter, scientists from Charles Darwin University are crowdfunding research to track and study the newly discovered species. The reward for a $1000 donation includes a five-day field trip to see one of the gliders and help the scientists with their work — Ms Tips is practising her commentary already. 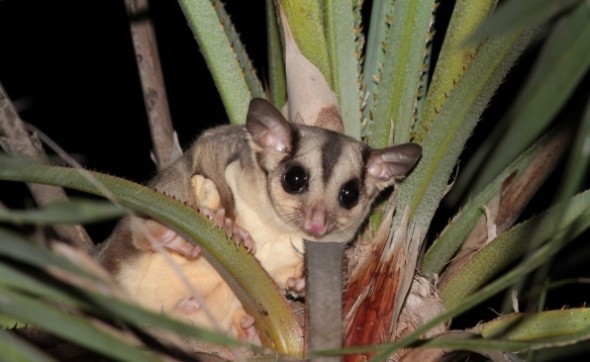 Waleed Aly makes me sick. How can one person be so smart & so talented as well! Where is the last bit of his solo. It cuts out just at the best bit in the sources I’ve found to date.

The Greens sure do stumble about even more than other parties when they do something dodgy, don’t they? We saw their pathetic attempts to justify using Gough Whitlams death in their advertising here in Crikey, and now we see them abandoning plans they announced that day and engaging in the “all that matters is getting across the line” pack mentality lines they mock others for. Guy Rundle likes to write about the great future the party has, but when you see them up close it’s getting harder to tell the difference between them and the others.

When someone snorts as much Koch as Christensen they are not usually so stout..