Poll Bludger: Turnbull honeymoon could stretch into a diamond anniversary

Malcolm Turnbull's poll numbers are exceedingly good -- and the honeymoon seems to show no sign of cooling.

Since Tony Abbott was dumped as prime minister in mid-September, opinion polls have indicated that Malcolm Turnbull and his government have been enjoying a kind of slow-release honeymoon.

Things started modestly enough, with some of the polls conducted immediately after the change showing the Coalition doing no more than drawing level with Labor.

As of this week though, poll aggregation finds the Coalition’s lead to be almost a match for Labor’s in the immediate aftermath of the Prince Philip knighthood fiasco, which precipitated the first unsuccessful Liberal spill motion in February.

While mounting methodological challenges and a string of poor performances by pollsters internationally are causing many to question the reliability of modern political polling, polls continue to matter if for no other reason than that people behave like they do.

Turnbull himself made that plain enough when, on that fateful day in September, he found all the justification he needed for his leadership challenge in that fact that the Coalition had “lost 30 Newspolls in a row”, without any need for talk about good governments losing their way.

The yawning gap that has since opened up in the Coalition’s favour will be looming large in calculations about election timing, and it cannot fail to be causing unrest within the Labor camp about the party’s own leadership — particularly in light of last week’s finding from Newspoll that Turnbull held a 64% to 15% lead over Bill Shorten as preferred prime minister.

Shorten’s defenders may well argue that there is nothing but air in the Turnbull bubble, as proved to be the case when Labor bounced back after Kevin Rudd deposed Julia Gillard in June 2013.

Overnight, the 57-43 poll drubbings of the previous six months evaporated, and Labor continued to look competitive over the course of the next six weeks.

While that led to some signs of nervousness in the Liberal camp, experienced hands felt assured that Rudd was enjoying nothing more than a “sugar rush” — and so it proved when the election was called in early August, at which point the Coalition charged into the lead.

The question for now is whether Turnbull’s strong polling marks the arrival of a new political messiah after a succession of dud prime ministerships, or if respondents are just temporarily indulging another new leader with the benefit of the doubt.

Some perspective on this question can be provided by comparing the recent run of Turnbull’s polling with the ghosts of honeymoons past. 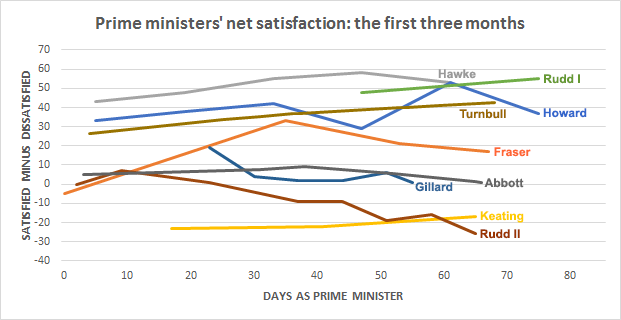 On this evidence, two features of Turnbull’s performance stand out. First, his is clearly in the upper echelon out of the nine prime ministerships under observation, with ratings roughly comparable to those of Bob Hawke in 1983, John Howard in 1996 and Kevin Rudd in 2007 (note that the latter’s election victory came just before pollsters closed up shop for the new year, hence the lack of figures from the early weeks of his reign).

This is particularly impressive given that Turnbull is the only one of the four who came to the post amid the unpleasantness of a leadership coup, rather than the warm glow of an election victory.

The second outstanding feature of Turnbull’s polling is its as-yet-uninterrupted upward trajectory, which makes for a particular contrast with Malcolm Fraser, Tony Abbott, Julia Gillard and Kevin Rudd on his second go, all of whom were showing signs of wear before their second month was through.

It should be noted that these results don’t offer much of a guide as to what happened at the subsequent election.

Cellar-dwelling Paul Keating overcame considerable public antipathy to achieve an unexpected victory in 1993, whereas high-flying Kevin Rudd didn’t even make it as far as polling day.

But that certainly doesn’t mean the popularity the polls are recording for Turnbull isn’t real, or without political implications.

Labor may have struggled to land a punch (until this week, at least), but it’s become increasingly clear that Turnbull’s enemies within are not of a mind to go quietly into the night.

As Kevin Rudd can attest, Turnbull could find himself in a very dangerous place if ever his embittered internal foes get some soft poll results to play with.

But as things currently stand, Turnbull’s strong position gives him an ace up his sleeve in the form of a possible early election in the new year, which could be eminently justifiable in terms of the need for a mandate for his own prime ministership.

Should he emerge from a campaign fought under his own banner with the Coalition’s present majority intact, as the polls now suggest he would, the result would be no less a defeat for the Liberal Party’s conservative revanchists than for Bill Shorten and Labor.

Re the headline mentioning a diamond anniversary: anniversary! a week is a long time in politics.

The public is still awarding Turnbull credits for not being Abbott. But surely the worm was beginning to turn even before this poll had the luxury of time in which to be published.

Shorely shome mishtake – diamond=60. Let’s see how he is doing at 60 weeks for that dumb headline.
Did the intern ‘tasked’ with headers mean ‘paper’ anniversary, which is one year?
Even that is an election away, if at all.

A major proportion of the poll lead is attributable to the relief at being Detonyed and it is likely to continue until an election is called.Turnbull has got shit policies an ordinary front bench,and a poor record as a campaigner (see vote for Queen).He is verbose and prolix and vastly overates his nouse if utegate is any indication.To secure the job he lusted after he has handed out portfolios to unsuited persons like Morrison and Brough.He is going to have to do something about Abbott or face the full force of the clownshoes wrecking ball whilst in election mode which will mean a sniping and leaking campaign till polling day..He might be agile nimble and lucky but he’s going to need to be once the monkey pod hits its stride..

I suspect William is talking about (and comparing) these various PM’s after 60 DAYS…That’s what the graph says anyway! That Turdbull’s ‘line’ will remain in the ascendancy is wishful thinking IMHO.
Also, William seems to be completely ignoring this week’s Essential poll…latest poll out I think…which showed a 51%-49% result in favour of the Coalition, a definite DROP in their support.
Let’s wait for a few more polls before we start making heroic predictions maybe?

CML – thanks, that makes sense. I find graphics brain numbing and rarely grok them.