Breaking news: Oscar Pistorius is not convicted of murder! Except that, whoops, he was actually. Plus other media tidbits of the day.

The Walkleys are not the Oscars. While Crikey’s correspondents thought the Walkleys were pretty fun, we hear those following along at home had a much harder time of it. The live broadcast, streamed on the Walkleys website and on Sky News’ A-PAC channel, began too early, while those in the room were still being told the house-rules before the host switched to TV mode. The noise left something to be desired, with presenters often having their mics on as the winners walked to the stage, leaving the audience to catch distracting murmurs while the winners did their thing. During the dinner break, viewers at home were treated to a collection of shots from the short-listed documentaries while those in the room got to hear Waleed Aly’s band rock a cover of Pink Floyd’s Comfortably Numb (it was pretty good) — speculation is that the network wouldn’t have had the license to broadcast the song. When the Gold Walkley winner was announced, the camera took around 30 seconds before focusing on winner Caro Meldrum-Hanna’s face, to the annoyance of some home viewers.

Faced with a barrage of criticism on social media, Sky News’ digital director Kylie Merritt tweeted that the broadcast was “a live feed of the elements provided by the Walkleys organisers and venue”. “We have no control over lighting or audio, as is the case with many [outside broadcasts]. The Walkleys is not the Oscars”.

Crikey asked the Walkley Foundation this morning what was up with the broadcast, but the dust appeared to still be settling on what went wrong. “We’re happy with how the A/V went in the room, but we haven’t had a chance to watch any video of the Sky broadcast yet, as we were all working in the room,” multimedia manager Kate Golden said in an email. “We’re sorry to hear there were some issues for people watching at home.” — Myriam Robin

A Walkley for GetUp? After the Nauruan government raised the price of journalistic visas to $8000, online activist group GetUp! launched a campaign to fund journalists wishing to report on Australia’s asylum seeker policies. Nearly 5000 people contributed funds, and the resultant media outlet, the Shipping News (a play on former immigration minitser Scott Morrision’s quip that “it’s not the Government’s job to run a shipping news service for the people smugglers) has funded several in-depth stories on Australia’s immigration detention policies.

Last night, one of those pieces won a Walkley. Safdar Ahmed’s “Villawood: Notes from an Immigration Detention Centre”, took out the gong for Best Artwork. A comic-style long-form piece on life inside a detention centre, it was praised by the judges as an innovative way to get around the photography restrictions within detention centres. “By using the stories and often the artwork of the asylum seekers, Ahmed has produced a moving documentation of their plight, and a damning condemnation of Australia’s detention system,” they commented.

Rural media submissions sought. Stakeholders are being asked to make submissions to a parliamentary inquiry into regional media, for which submissions close in February. Bronwyn Bishop, who chairs the House Arts and Communications Committee, called the inquiry in response to changes to regional programming by the ABC and cuts to Fairfax regional newsrooms. “People should be able to access and enjoy the arts, and have reliable and relevant news and other services no matter where they live,” Bishop said in a statement.

The inquiry will look into the importance of public and commercial broadcasting, online content and live production to rural and regional Australia, including the arts, news and other services. The inquiry is calling for submissions and will hear from key stakeholders, service providers and communities. — Crikey intern Jess Davis

Breaking News breaks apart: As whoopsies go, it was a doozy. Last night’s 6pm National Nine News in Sydney interrupted its bulletin at 6.50pm for a breathless “Breaking News” item. South Africa’s Supreme Court had upheld the original decision in the Oscar Pistorius case that the “blade runner” was guilty of manslaughter, not murder, and would therefore not be going back to jail

“As we come back to you we have breaking news now, the Supreme Court in South Africa has upheld a manslaughter conviction handed to Oscar Pistorius over the killing of his girlfriend Reeva Steenkamp. Judges have decided not to upgrade his conviction to murder, which means he won’t return to jail.”

Er, not quite. As the ABC was reporting on its website at around the same time, Pistorius had, in fact, been convicted of murder and would now be re-sentenced and could serve a term of up to 15 years.

How the hacks at Nine could get it so wrong on such a simple one-fact story is a mystery. But it certainly showed that the current undisciplined scoop frenzy in TV news can lead to massive error. — David Salter

Magazine sales. This year is shaping up as a miserable one for American magazine publishers at the country’s newsstands, which are a small part of total sales for each US magazine because of the greater reliance on the certainty of subscription-based income. But single-copy sales at newsstands are nevertheless an indicator of the direction of sales — and the last figures suggest the trend isn’t the “friend” for magazine owners.

MagNet — the US company that tracks and analyses magazine sales — issued its third-quarter newsstand sales and distribution report this week, which showed that the total number of print magazines sold via newsstands and other retail channels (such as supermarkets like Walmart and Target) fell 10.3% from 128.8 million in the third quarter of 2014, to 115.5 million in the third quarter of this year. MagNet found the total dollar value of these sales dropped 9.8% from US$697 million to US$628.9 million in the September quarter. — Glenn Dyer

Front page of the day. Bravo to the Daily News. 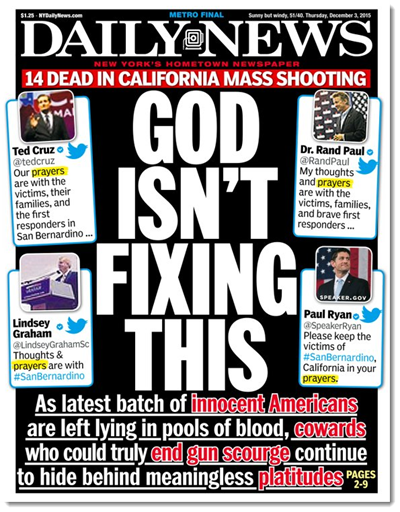 I attempted to watch the Walkleys on the official website. Woeful. I gave up.

As I recall SBS had the telecast last year- please, please, hand it back to them.